Three years out of college, actor Josh Gad had one gig to his name: playing Sgt. Bruce Larabee on the hit drama ER.

“I [was] ready to leave acting behind,” he said to USC School of Dramatic Arts Dean David Bridel on Thursday. “I was tired of rejection.”

But Gad didn’t leave acting behind. And now the world knows him for being the voice of snowman Olaf in Disney’s Frozen, Steve Wozniak in the 2013 biopic Jobs and Elder Arnold Cunningham in the Broadway musical The Book of Mormon.

Gad kicked off the USC School of Dramatic Arts’ first Spotlight@SDA event of the academic year, a series in which Bridel talks with industry professionals about their path and they offer advice to the next generation of artists. Past participants include Friends alum Lisa Kudrow and The Big Bang Theory’s Simon Helberg.

Gad spent his childhood and teenage years performing. He jokes he didn’t have a choice: His schoolteachers told his mother he was a lost cause.

“I knew at a very young age that I had limited skills,” he said to laughs from the crowd. “My math teacher called my mother in, I think in the sixth grade, and was like ‘Your son is going nowhere quickly’. [My mother] was like, ‘You can determine that at this point?’”

He went to study at Carnegie Mellon University’s College of Fine Arts, where he was accepted to study directing. He studied abroad at Australia’s National Institute of Dramatic Art.

He remembered that moment, three years after he was out of college and didn’t have much to show for an acting career, when he called his mom with a Plan B.

“Jewish mother, I thought I was going to make her so happy. Your third son, like the other two, is going to law school,” he said.

But rather than elation, she gave him a reality check.

“You’ve spent 15 years of dreaming of doing this and you’ve only spent three years living out that dream and frankly, I think that’s cowardly,” she told him. 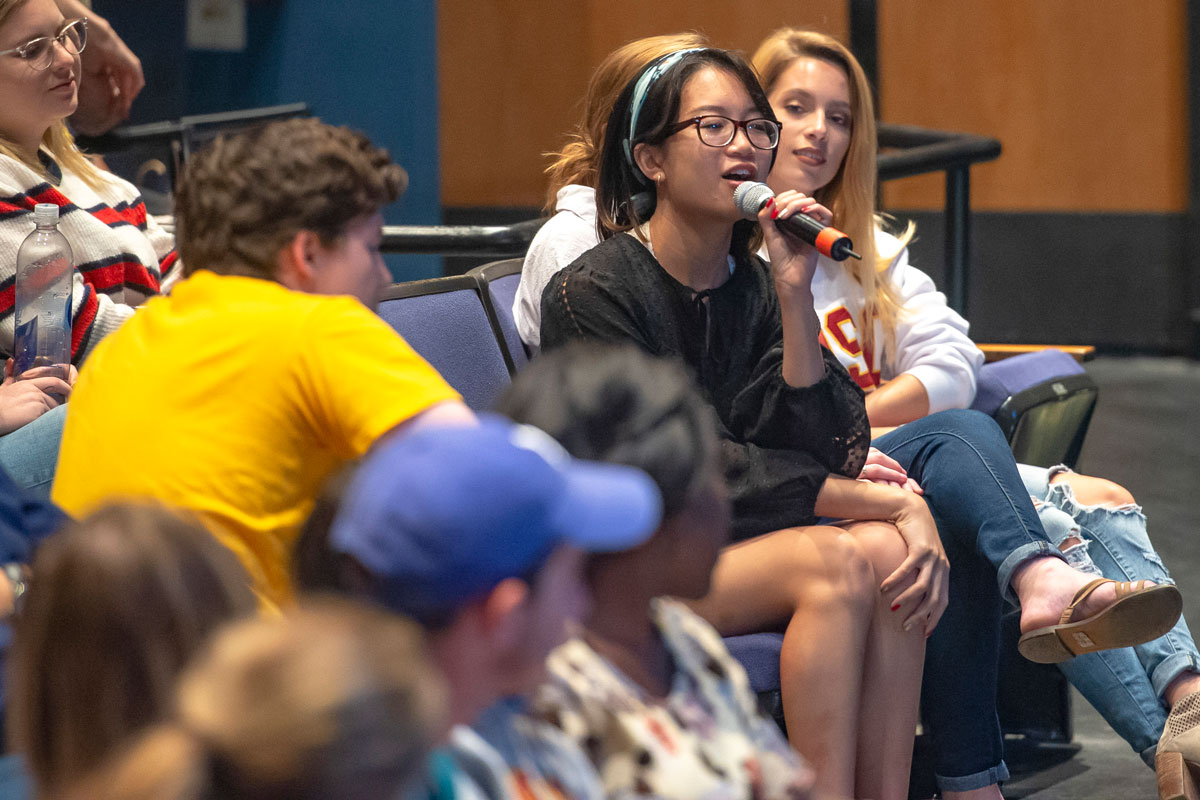 Not long after, an opportunity came up with the musical The 25th Annual Putnam County Spelling Bee: He was asked to join the show in San Francisco.

“At the time, remember, I had nothing to my name,” he said. “I [said] ‘No, thank you.’” He told them to let him know when the Broadway show would be available.

“I really couldn’t believe how arrogant I was,” he said. But at the same time, he learned a valuable lesson about saying no.

“This is the one life you presumably get to have, do it the way you want to do it,” he said.

Two months later, he got a call that a spot opened up in the Broadway show. They were upset at him, but he could audition.

And the audition didn’t go great. He had to dance and sing, which he hadn’t done since musical theatre in high school. He made it to the final two, the other guy being someone who was “really, really big.” Afterward, director James Lapine asked to chat, asking Gad if he was taking it seriously.

“This is potentially the biggest job opportunity of my life,” he said he told Lapine. “I figured I had two options … I could either crack a joke or throw up all over you.”

He remembers heading back to his hotel room feeling dejected. His agent called and told him he had two tickets to the show waiting for him. The director figured he should see it before he joined the cast.

Playing William Barfee in that show ended up being his big break, leading to movies like 21 and The Rocker.

And it led to a show with the makers of South Park, which we know now as The Book of Mormon. He had no idea it would go on to Broadway, let alone be a smashing success, winning nine Tony Awards and a Grammy. He was excited about it, sure, but there was a pressure to ditch it for a sure thing.

His manager asked him to audition for the role of Cam on an upcoming ABC show, Modern Family. He laughs now, knowing the show’s 10-season run.

“My manager back then threatened to fire me,” he said. “She’s like, ‘You are not taking what could potentially be a great paycheck.’ … My wife still wants to kill me.”

He ended up ditching that manager, and The Book of Mormon.

“It was probably the most fun I’ve ever had,” he said, noting he got to work on it from inception. 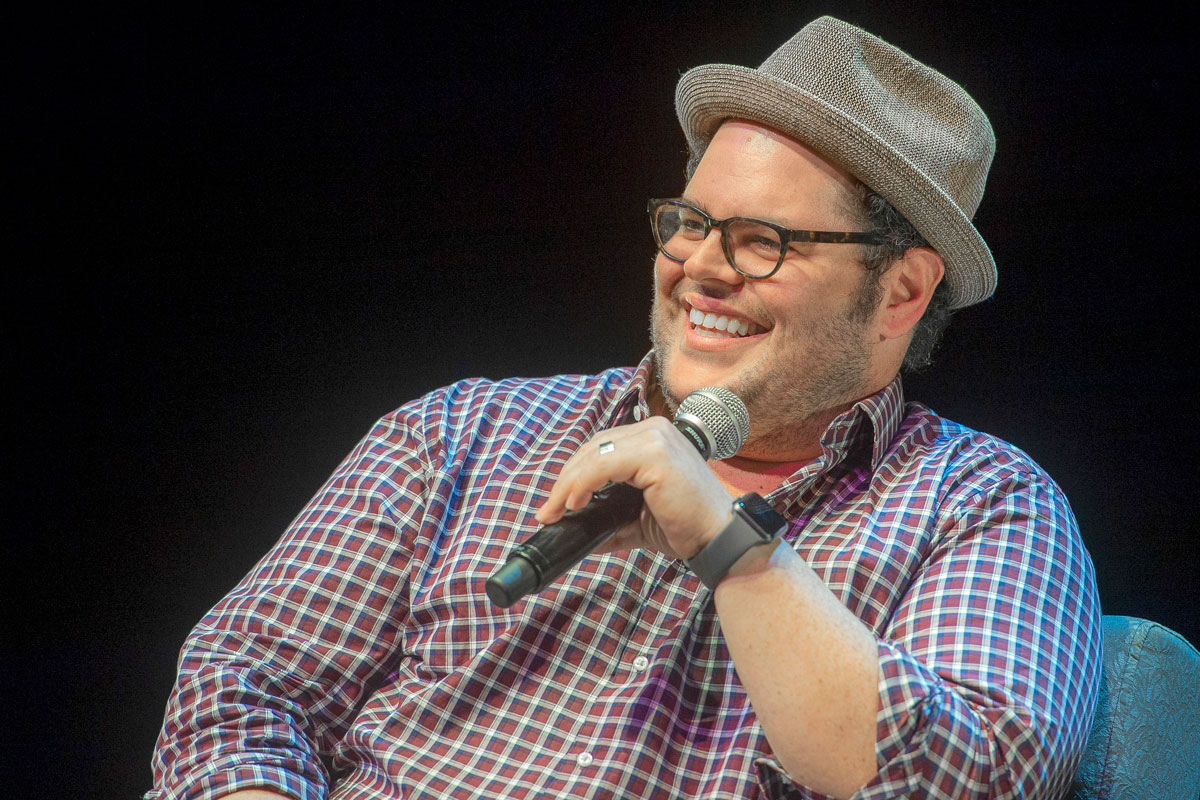 One of the sweetest roles, however, has been being the voice of Frozen’s Olaf, he said.

He remembered going to an initial screening of the film with his wife. He had heard about plot and scoring issues, so he didn’t have high hopes.

“My wife, who is my greatest critic, looks at me and says, ‘This one is really special,’” he said. “The way I felt about it was the way I felt as a kid watching Beauty and the Beast, Lion King and Aladdin. I was like, ‘Am I a part of one of these now?’”

He was interested in the reaction of one family member in particular — his daughter, who was a toddler at the time.

“There was a teaser of Frozen … Olaf didn’t speak, he just giggled,” he said. “My daughter looks up at the screen and looks over at me and she goes, ‘Dada?’”

Vanessa Diego, a junior studying theater, found Gad’s talk inspirational, but it’s what he said right before leaving that stuck with her the most. A student had asked who Gad would like to work with. He mentioned filmmakers Steven Spielberg and Martin Scorsese.

But lastly, “I would love to work with you.”

“My greatest hope is one of you comes up to me three years from now and says, ‘Hey, saw you at this thing and I’m doing this movie now and we should do this thing together,’” he said.  “Nothing gives me more joy and excitement than seeing youth. The reason for that is our industry is due for shaking up. And I would love for you guys to be the ones who shake it up …. You are the next frontier.”

For Diego, it made her feel like “anything is possible, as cliche as it sounds.”