In his five decades as an actor, director, playwright and theatrical scholar, Dakin Matthews has played Winston Churchill, King Lear, Falstaff, and any number of reverends, cardinals, colonels, senators and judges. But he’s never been a song and dance man. Until now. His next role is in Sara Bareilles’ first Broadway musical, Waitress, in which he not only sings, but dances.

Last month, this theatrical polymath spoke to USC School of Dramatic Arts undergraduates about looking forward to that new challenge.

“To have to work at the extreme edge of your experience at the age of 75 is wonderful,” he said.

Matthews was on campus giving a masterclass on Restoration comedies to students of the School including professor John DeMita’s 352 acting class, making the subject come alive with historic tidbits and very specific information on how to parse the texts and shape the often-unfamiliar language into comfortable conversations. DeMita, also an actor and director, first met Dakin when he was DeMita’s teacher at ACT in San Francisco, and has been a mentor to DeMita since. “It’s a wonderful thing to do – maintain a relationship with people you work with,” DeMita told the class.

Matthews was honest about the difficulty of Restoration texts.

“Your job as an actor is to speak that language as if it is your native tongue.” Dakin Matthews

“The level of diction and grammar and rhetoric in a period 200 years ago that was itself very stylized and artificial is a little harder to figure out sometimes,” Matthews said. “Your job as an actor is to speak that language as if it is your native tongue.”

Puritans, who hated ostentation and display, closed down the theaters in England from 1642 until 1660. When the Royalists who had gone into exile in France returned to England and restored the monarchy, they were hungry for plays that were the opposite of Puritanism, with peacock displays of fashion, blatant sexual references, immoral characters and language as fanciful as the fashions. For the next 50 years, Restoration comedies reigned. Many were dreadful and have thankfully fallen out of favor, but others, such as The Country Wife, are mainstays of theatre repertory. Fledgling actors need to learn how to master the somewhat difficult, often artificial language.

“Artificial used to be a compliment,” Matthews told the class. “For this period, artificial means you took the time and effort and had the skill to make a good style presentation.

“One of the artifices you had to be able to master in order to survive in the 16th and 17th century as a person of substance and intelligence and persuasion was the ability not just to state an idea but to develop it, following the patterns of development that people recognized, whether they were logical or chronological or historical.”

“It is a slightly heightened language, but it doesn’t stray from everyday language that far,” Matthews reassured the group. “You serve it best speaking as effortlessly as you can, stressing the fewest words possible to make your point, and stopping when the syntax stops.”

Make your point, repeat it

Still, the speeches in Restoration plays can be lengthy. DeMita noted that repetition of a theme often occurs in Restoration speeches, much like with Shakespeare. DeMita said that actors in Restoration pieces today sometimes wonder, “Why am I still talking? Didn’t I make my point three paragraphs ago?” 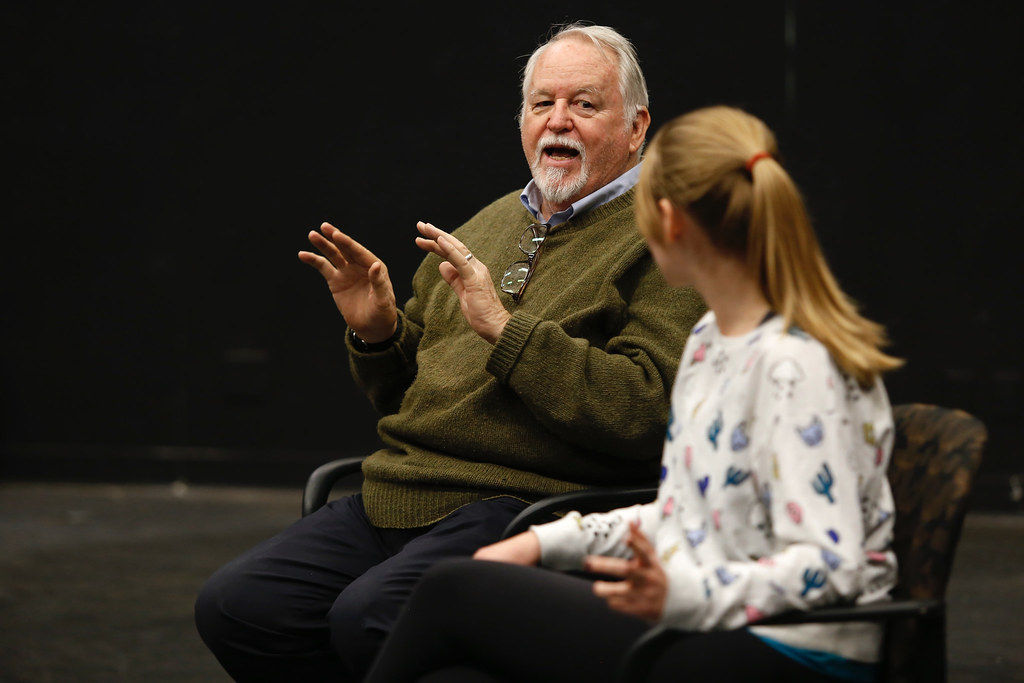 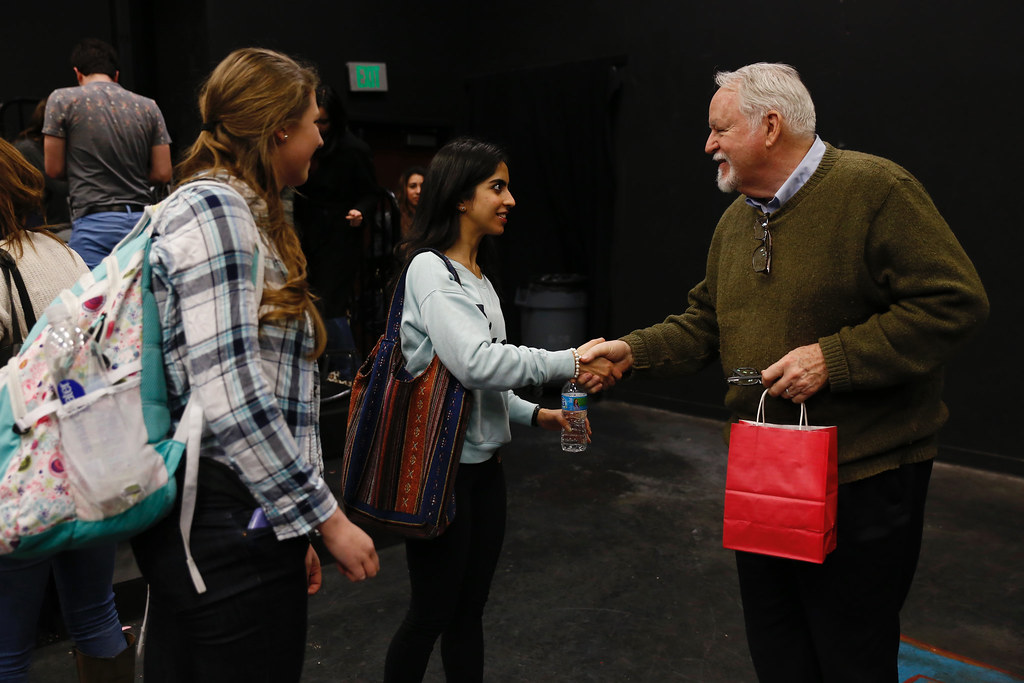 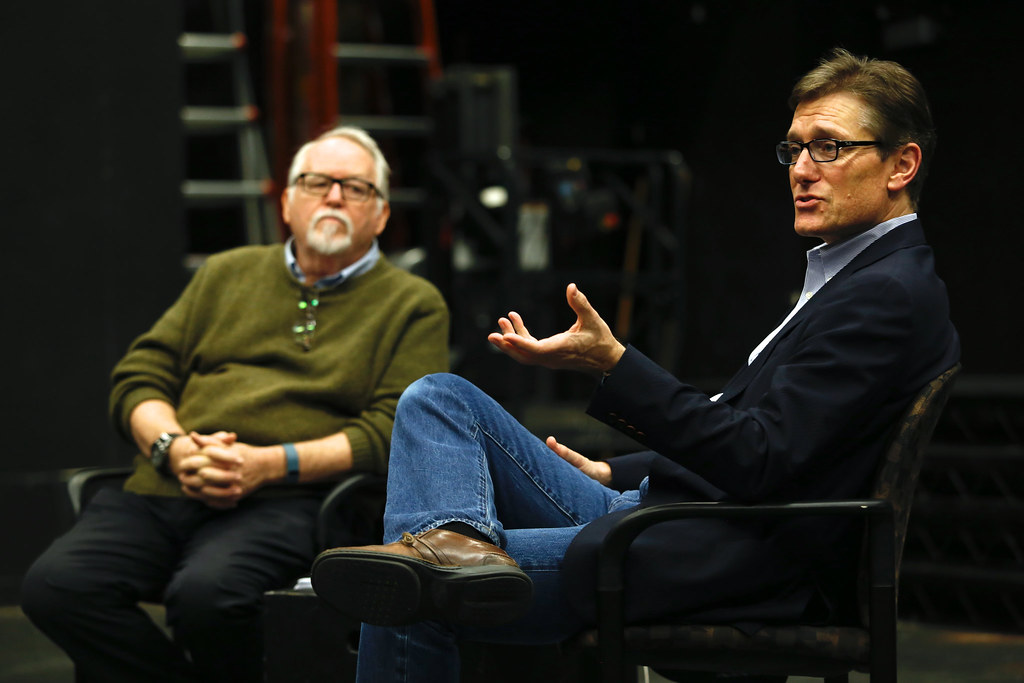 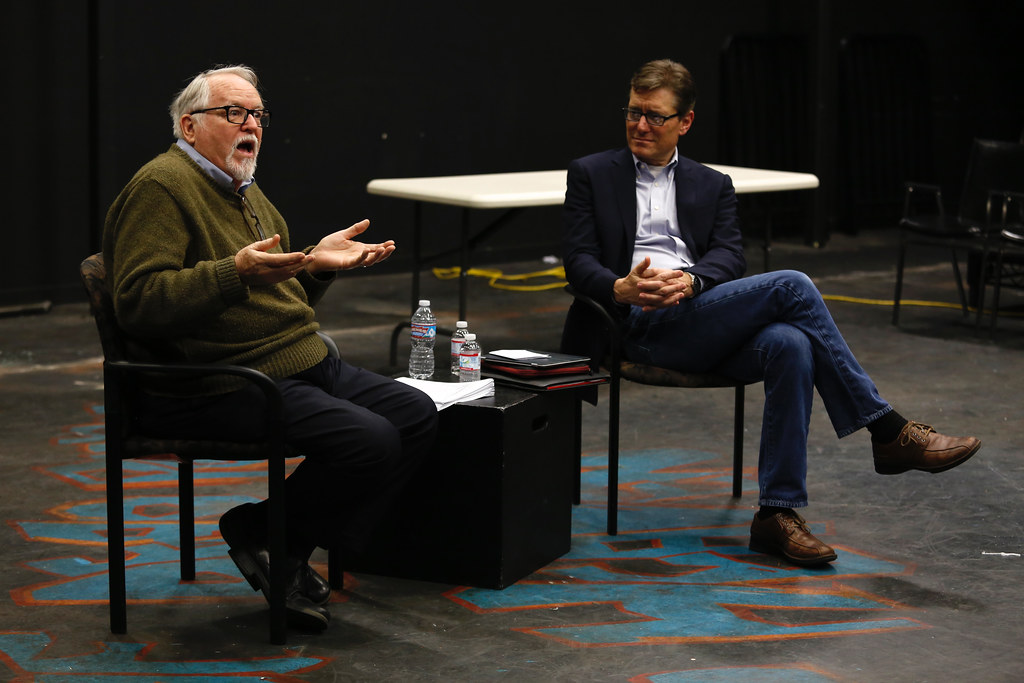 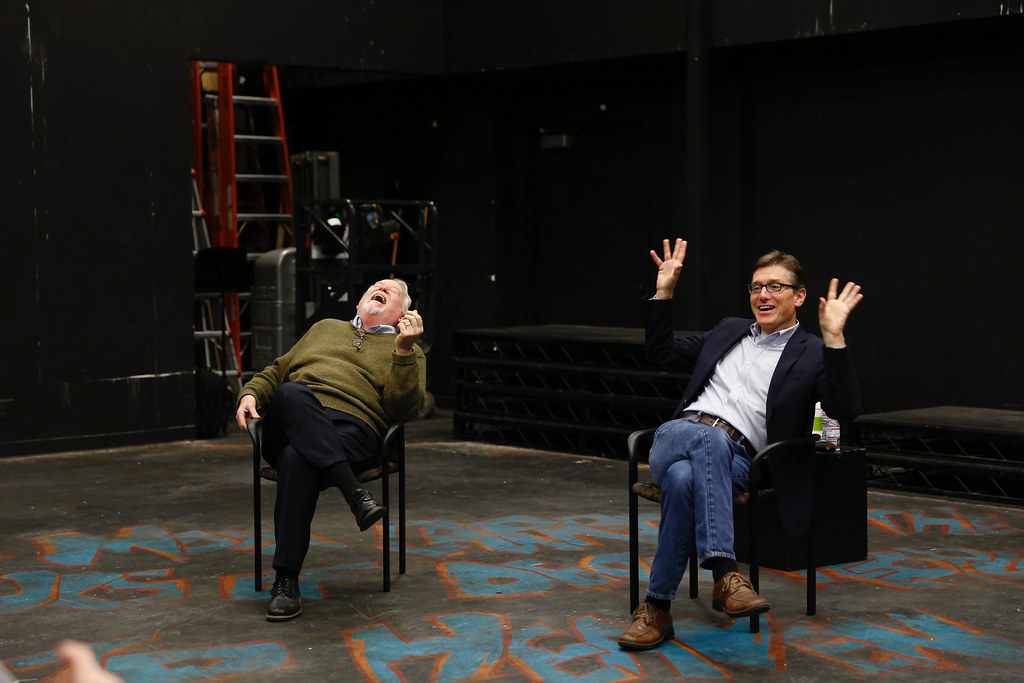 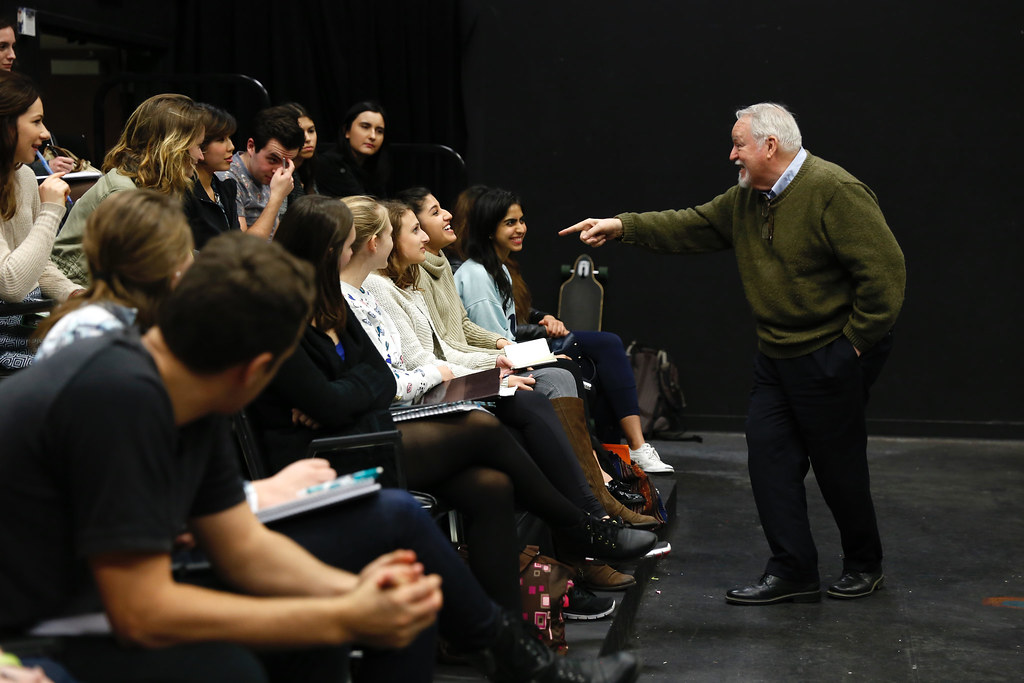 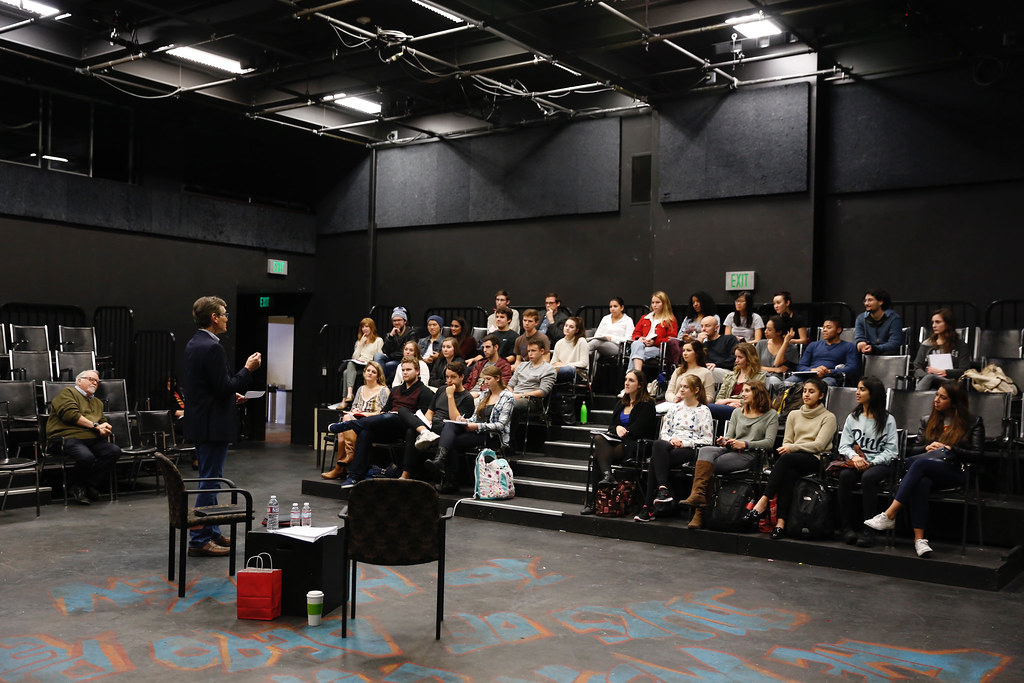 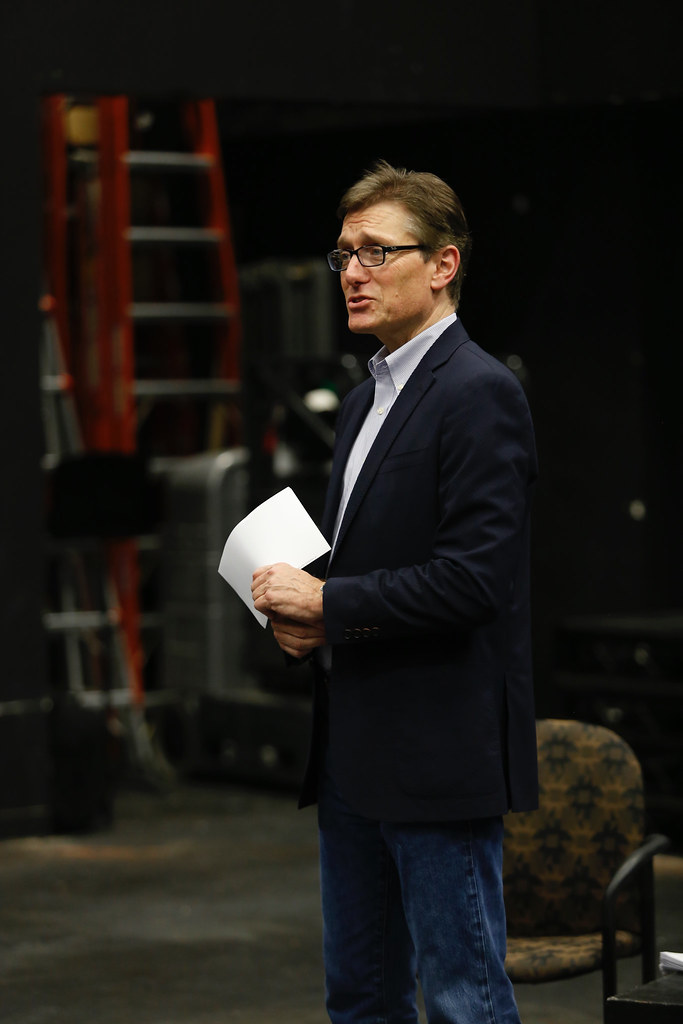 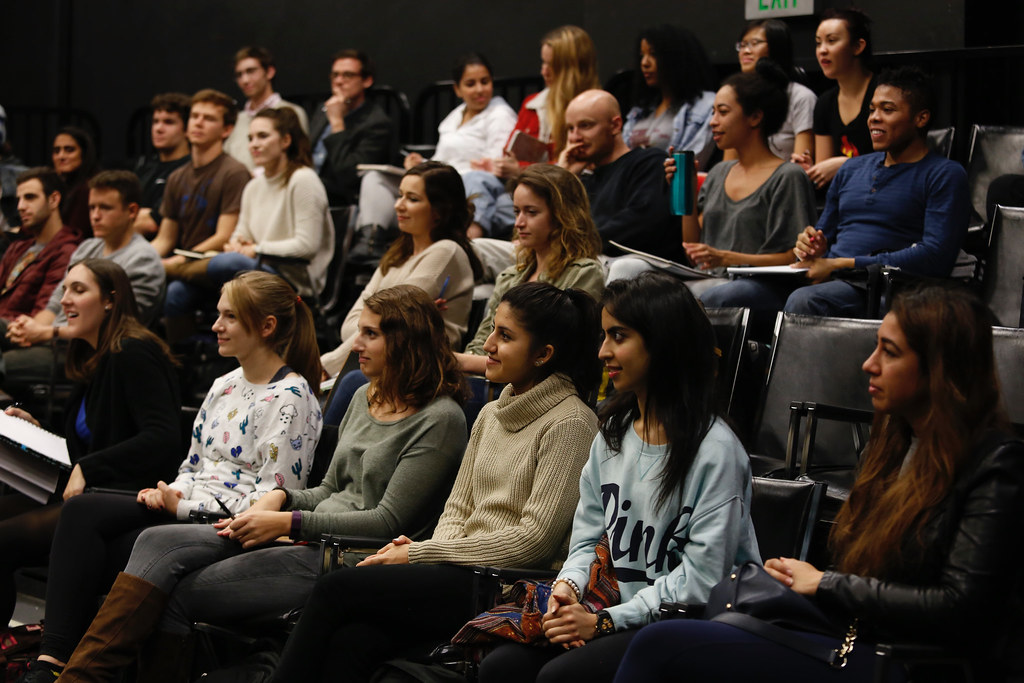 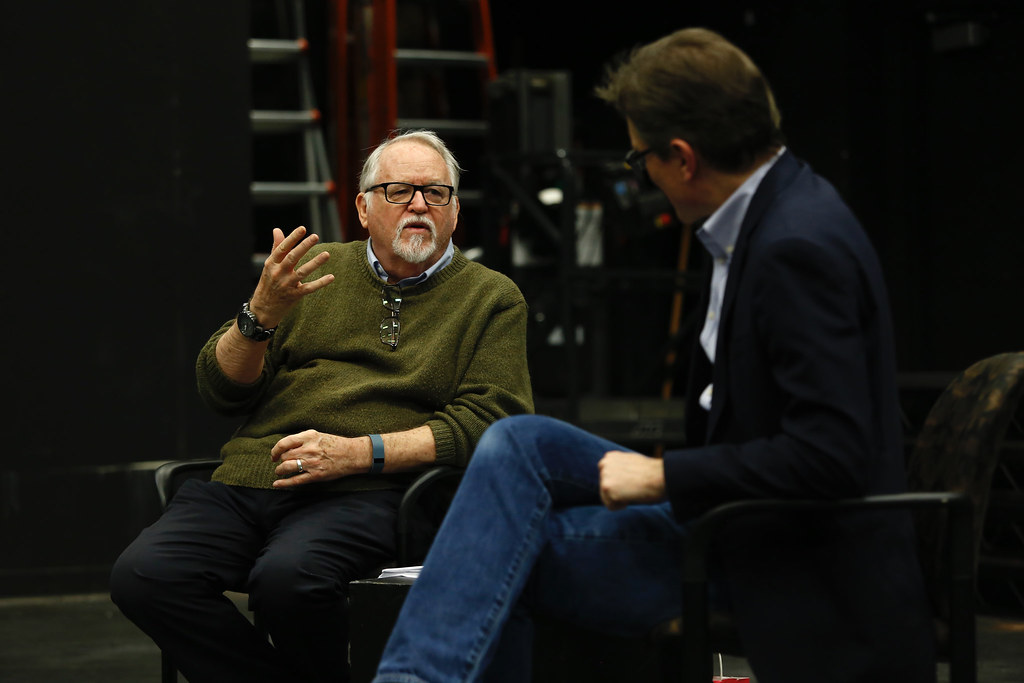 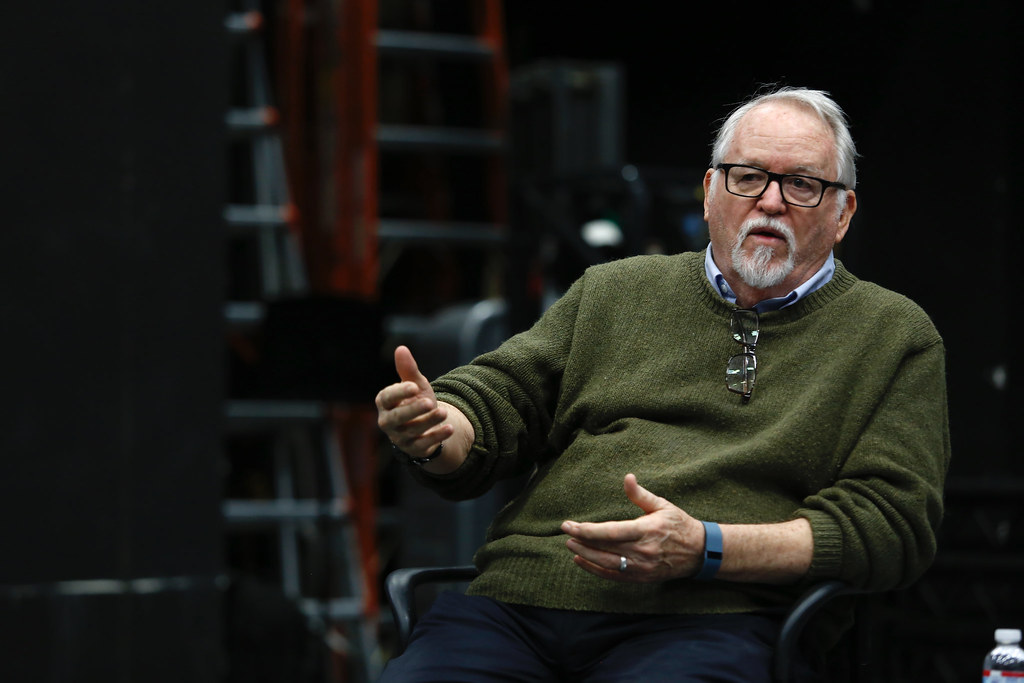 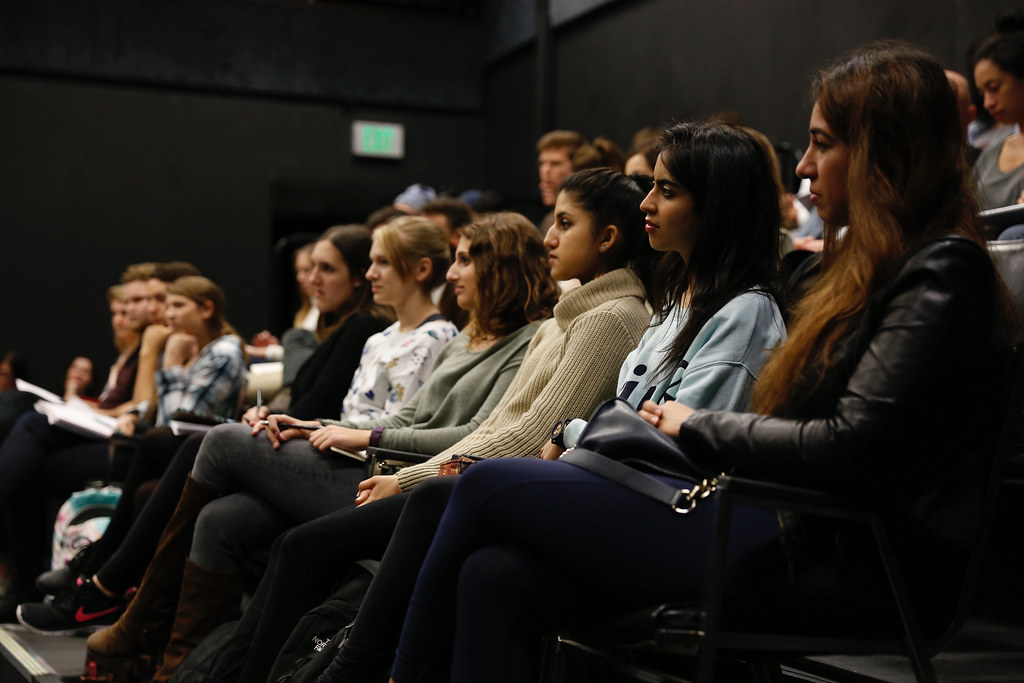 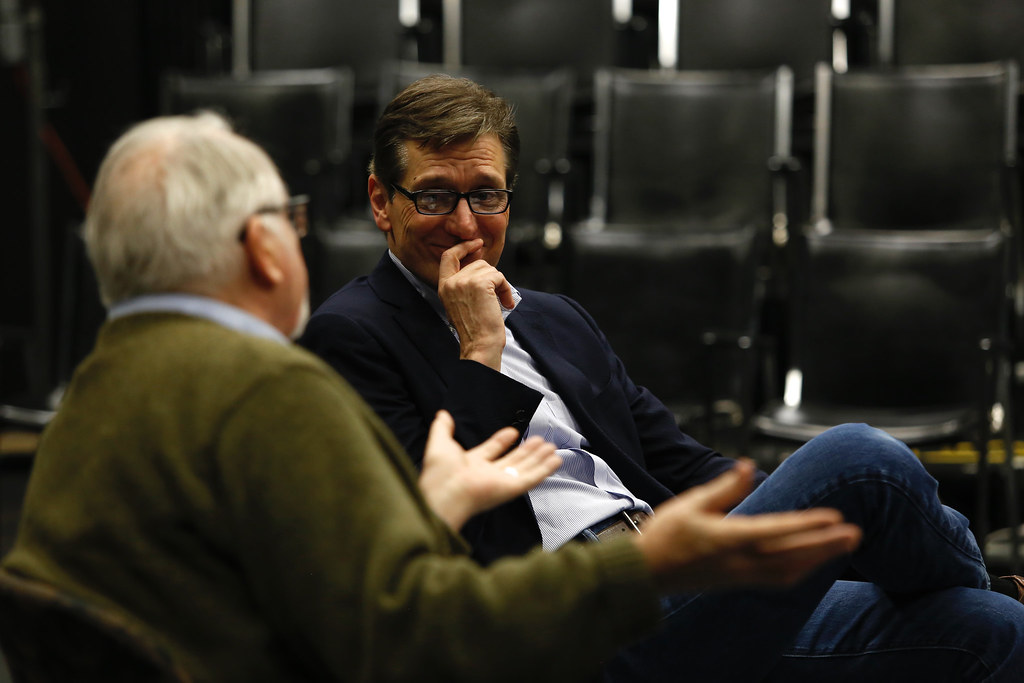 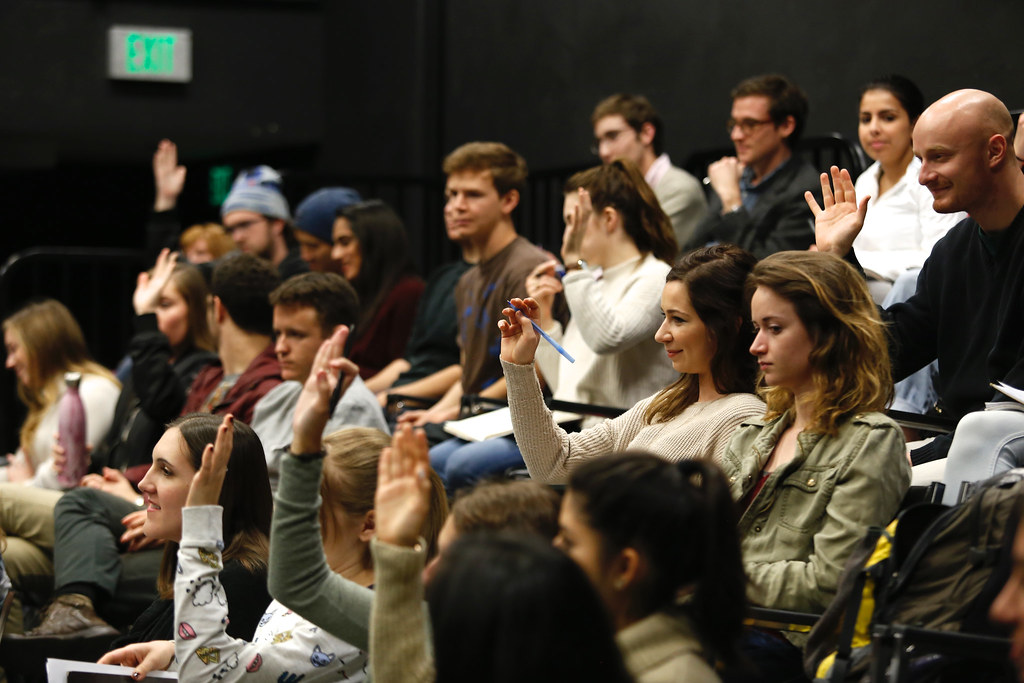 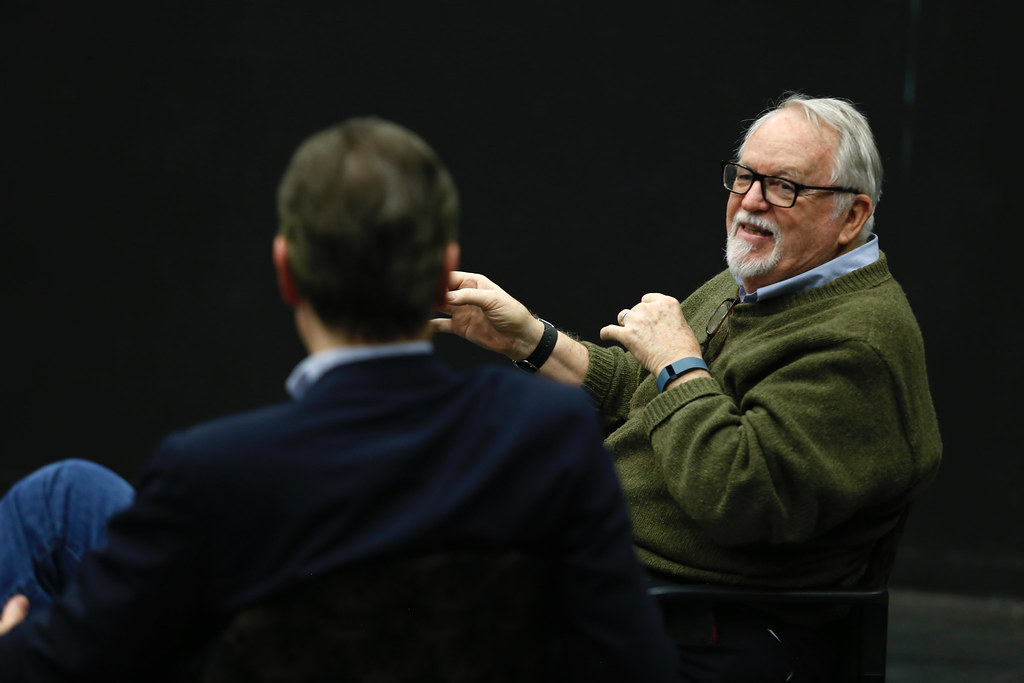 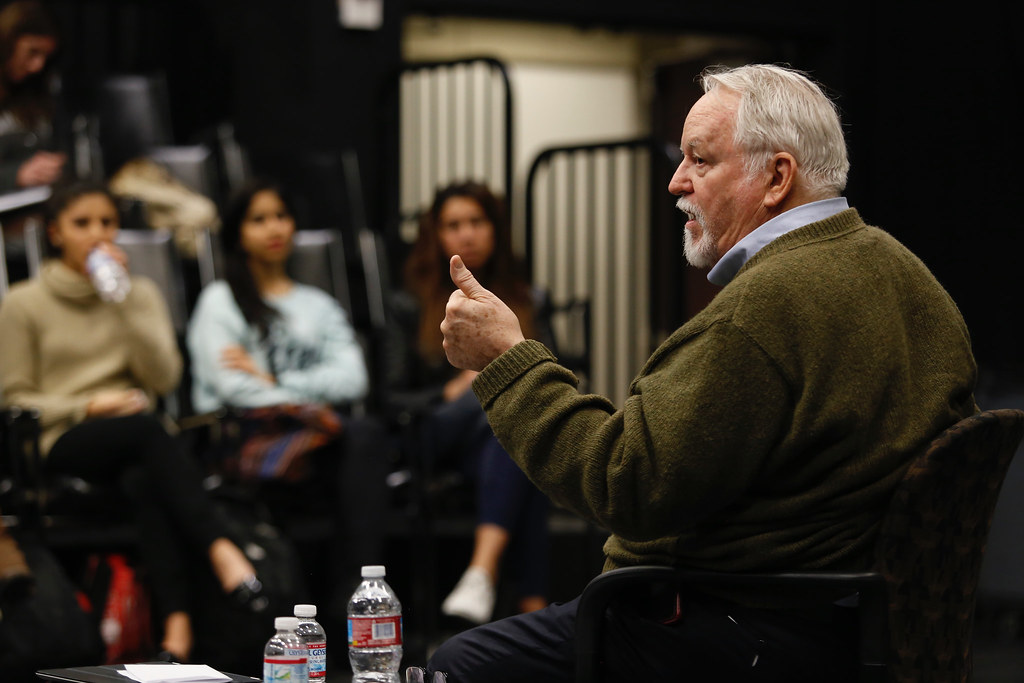 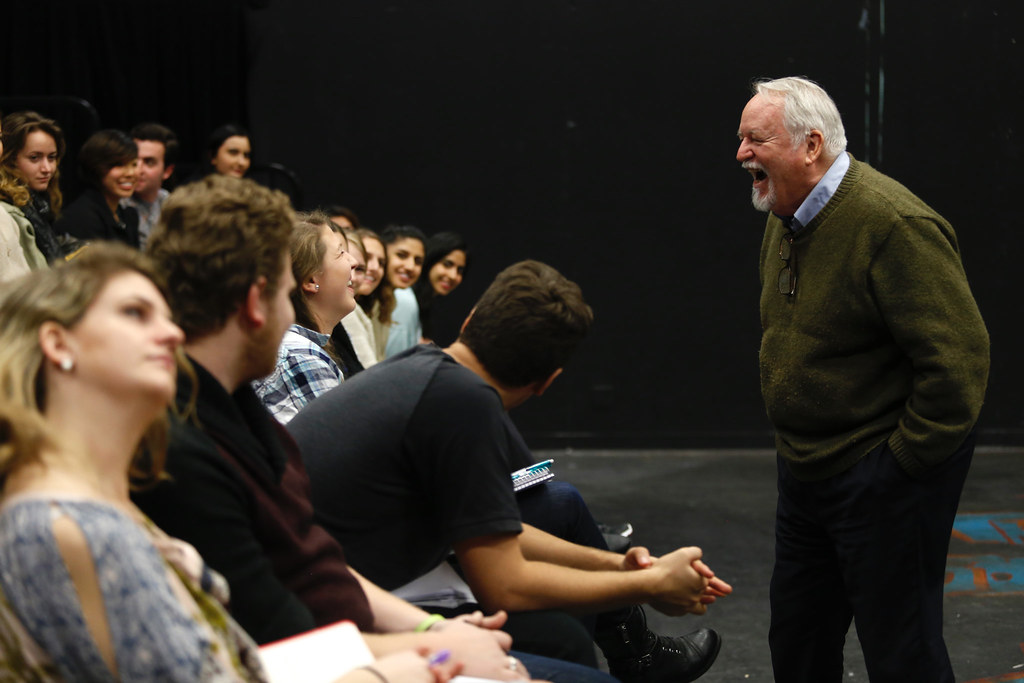 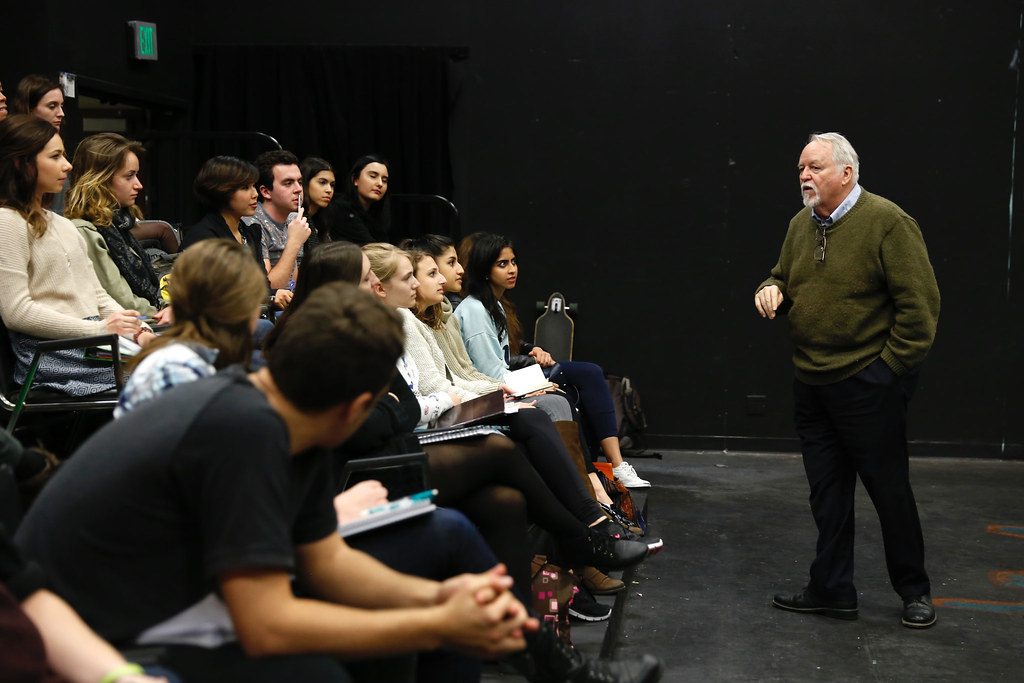 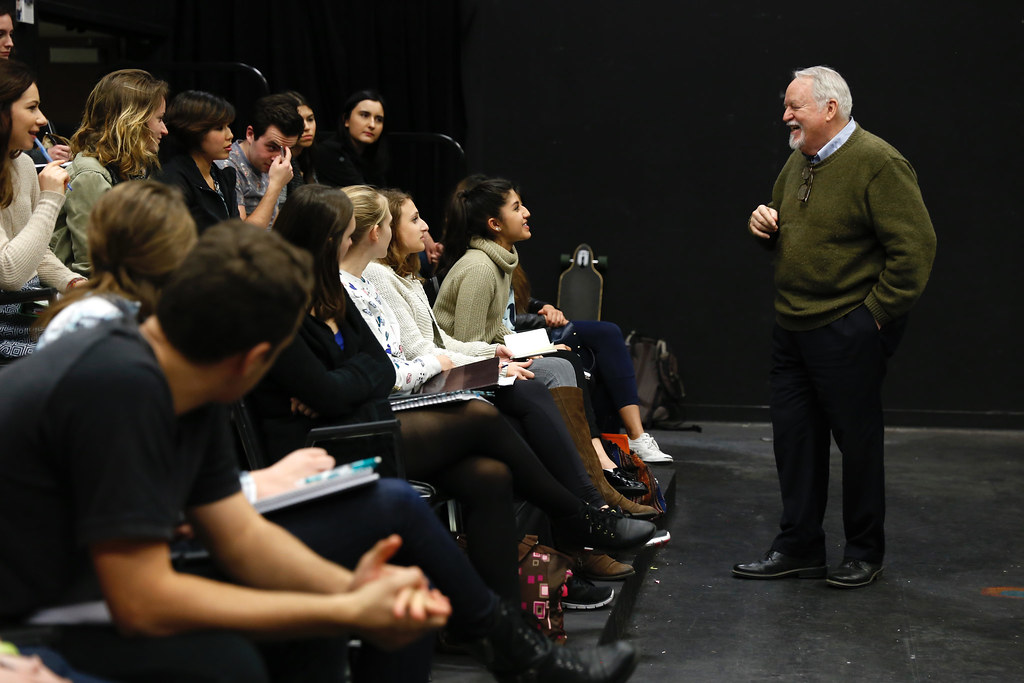 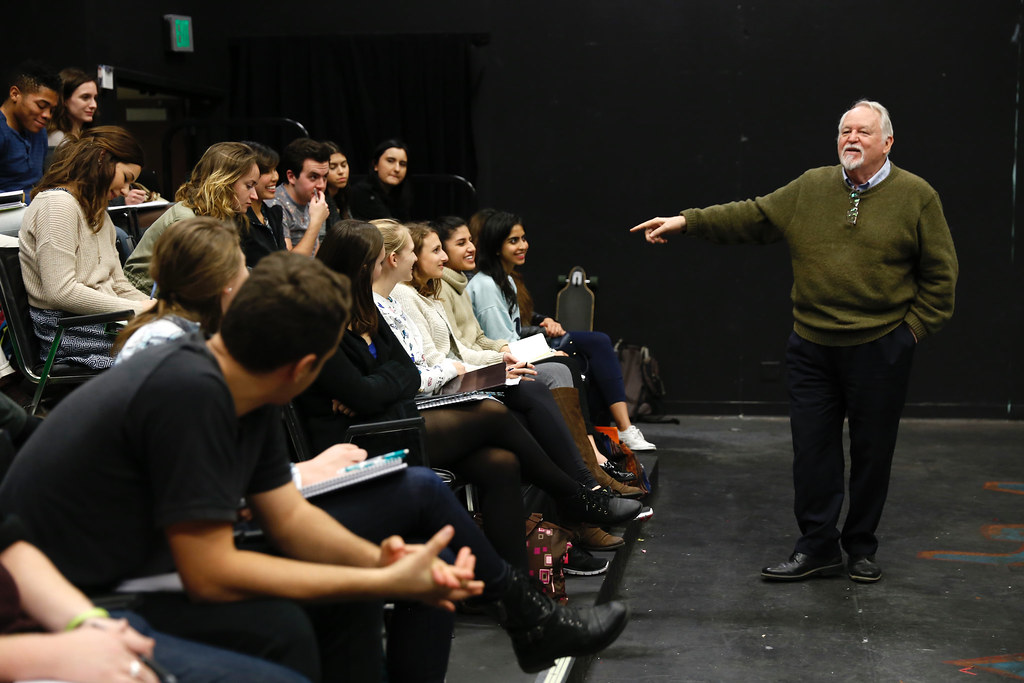 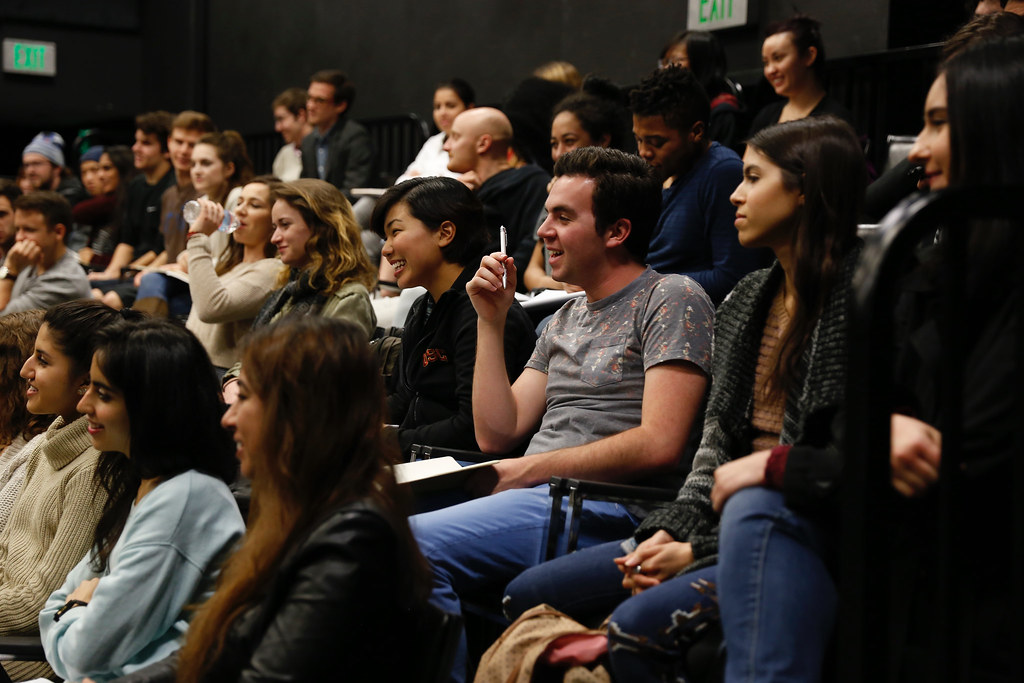 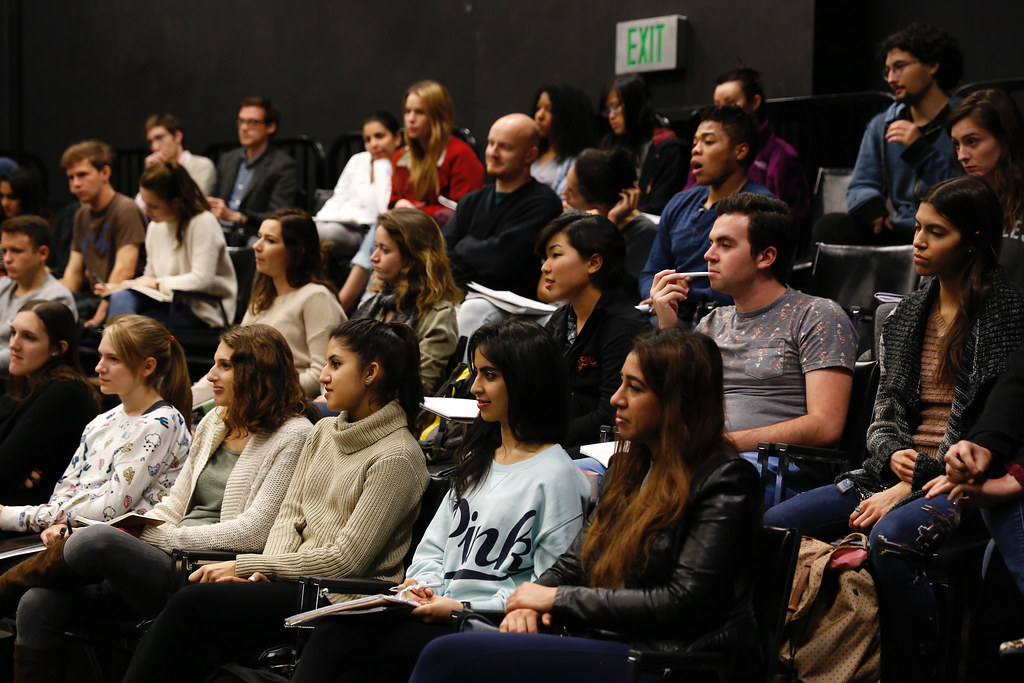 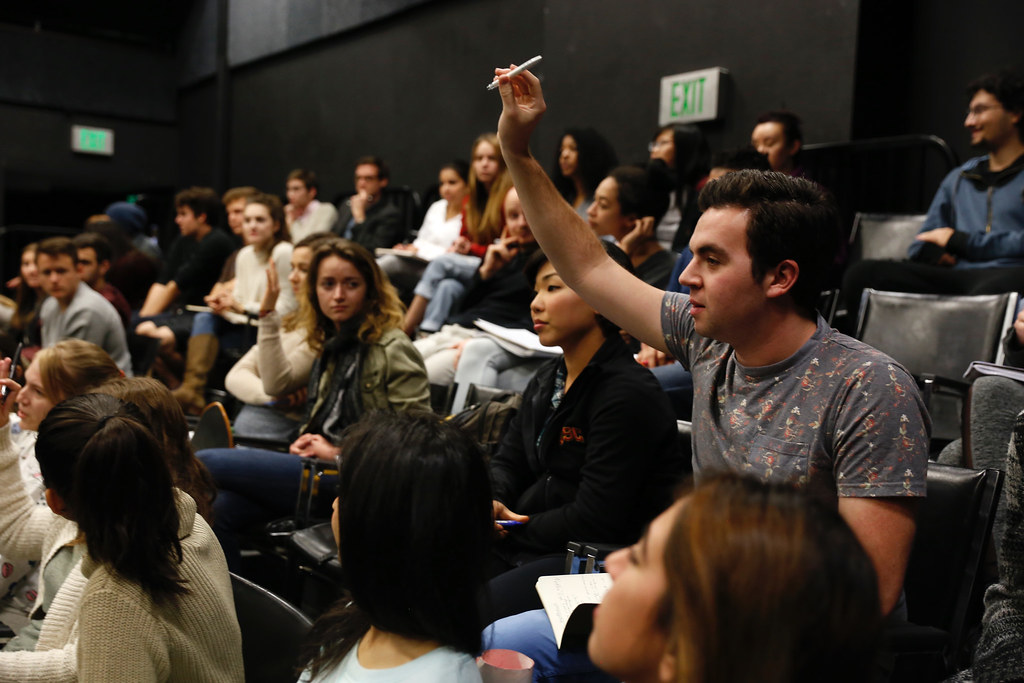 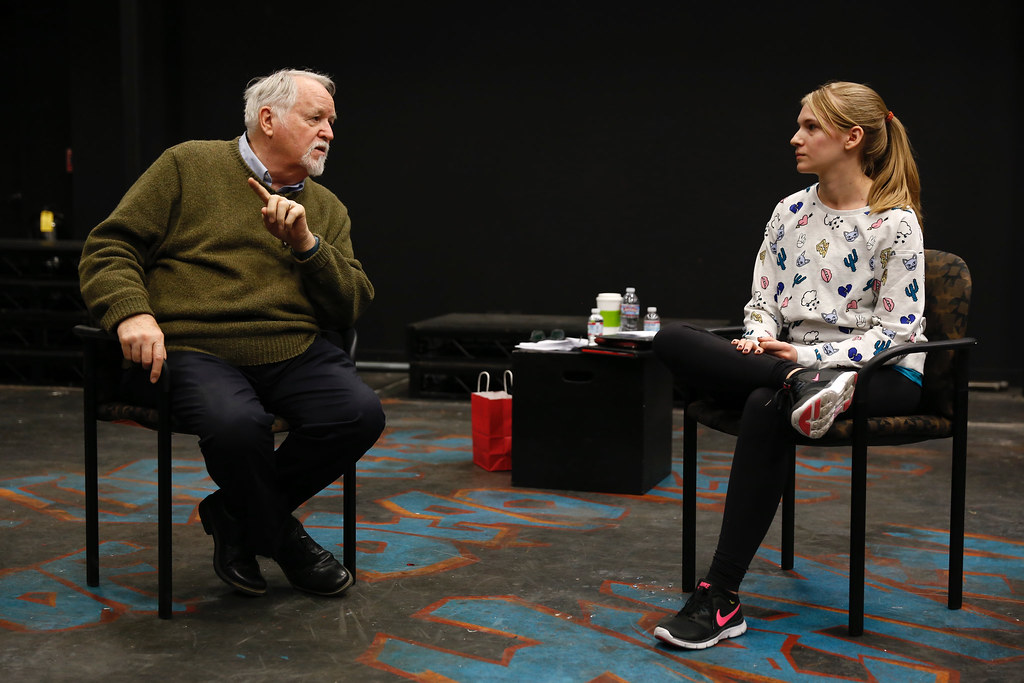 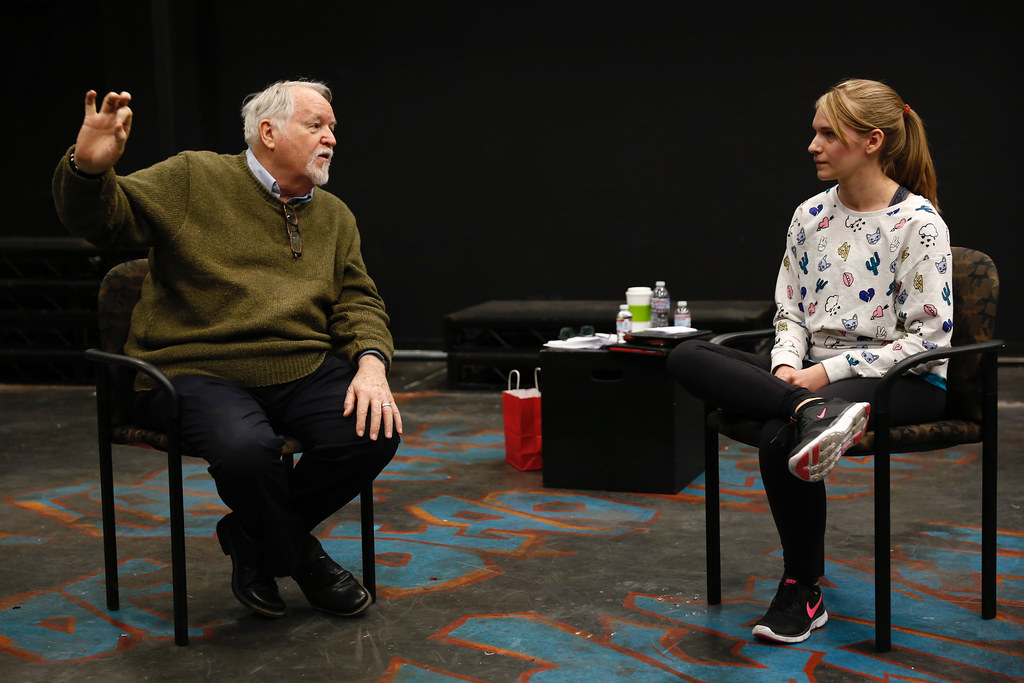 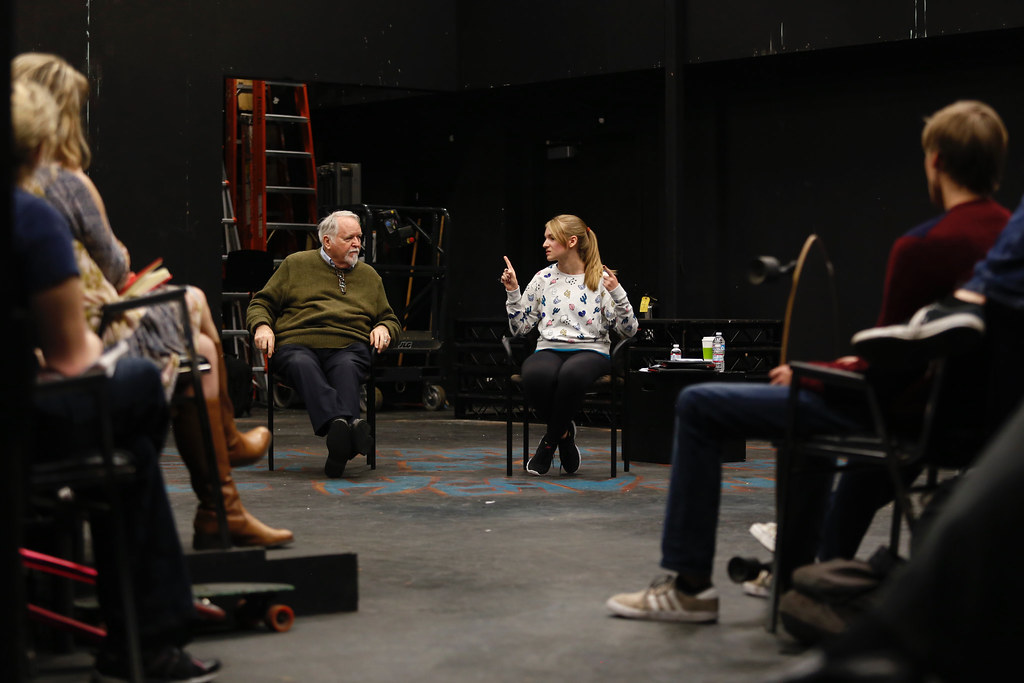 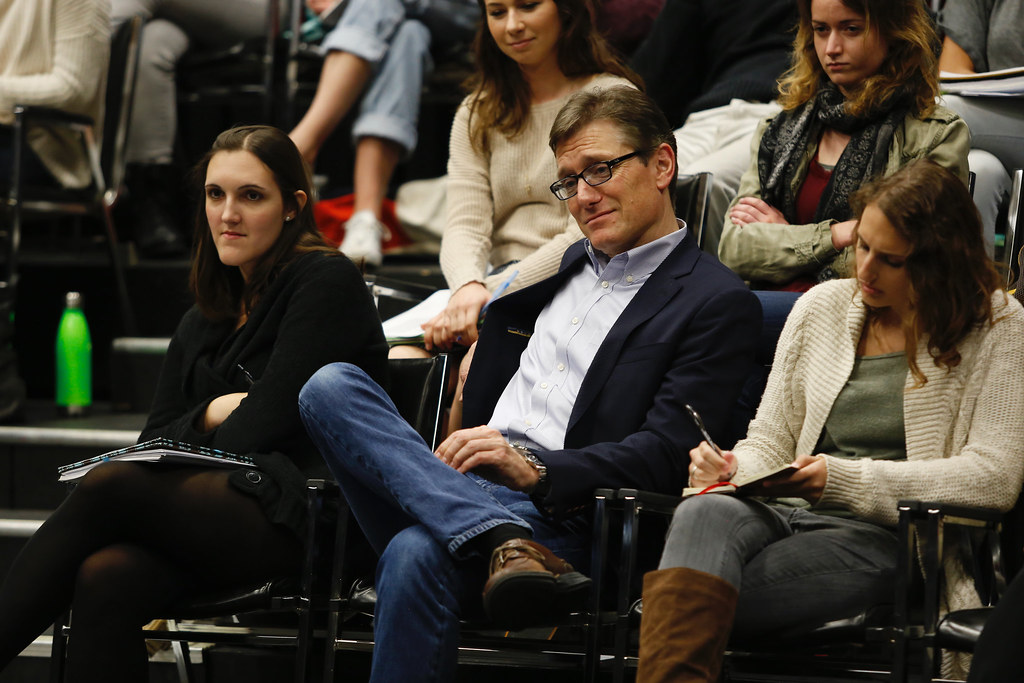 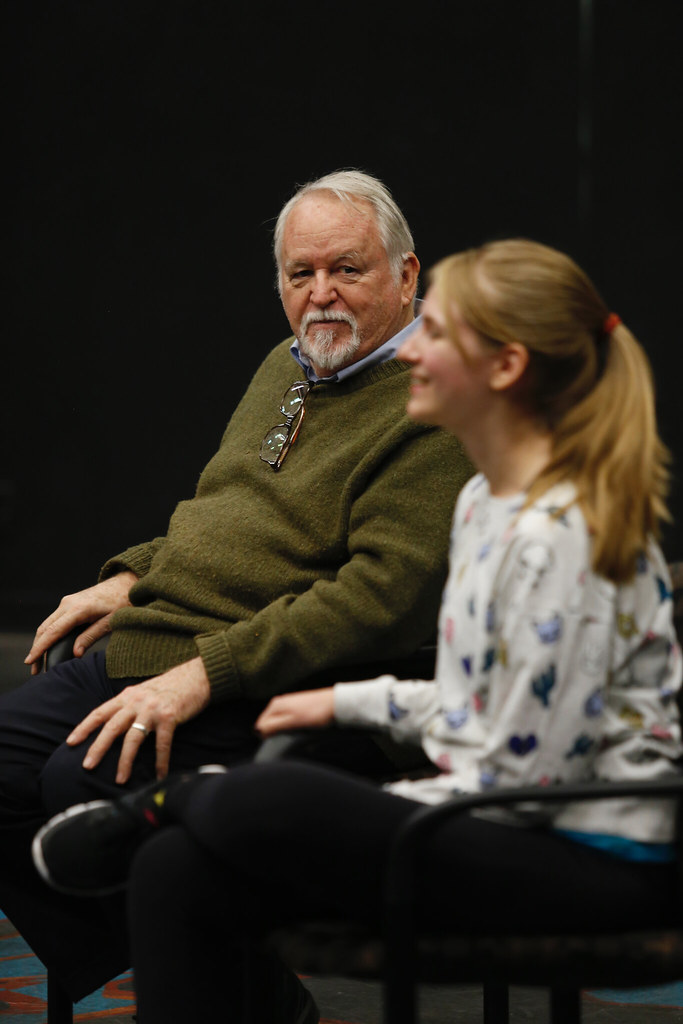 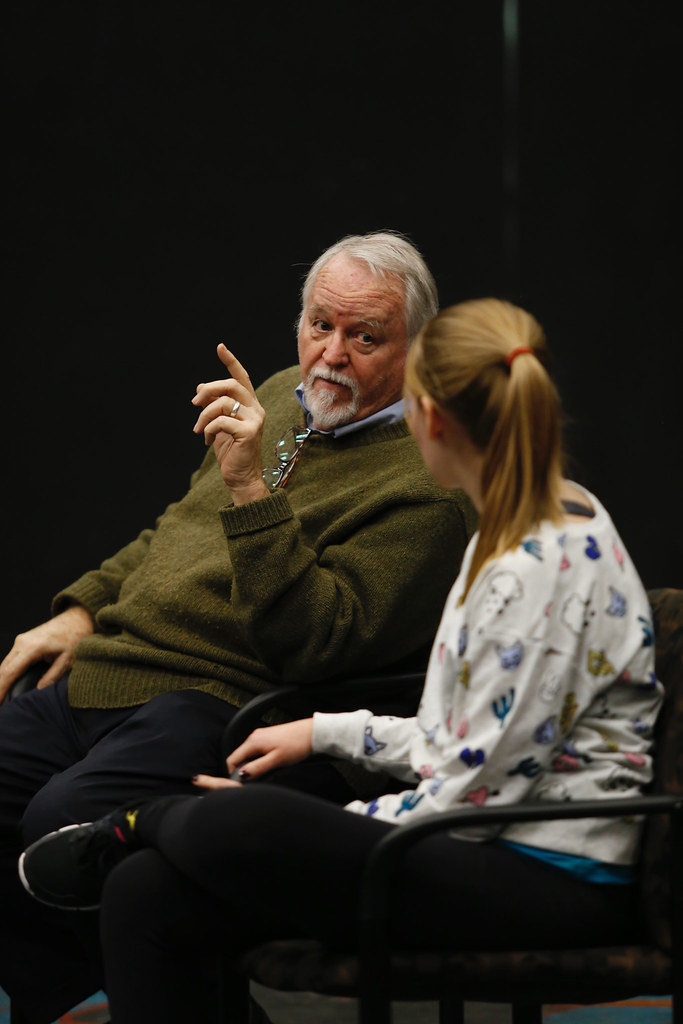 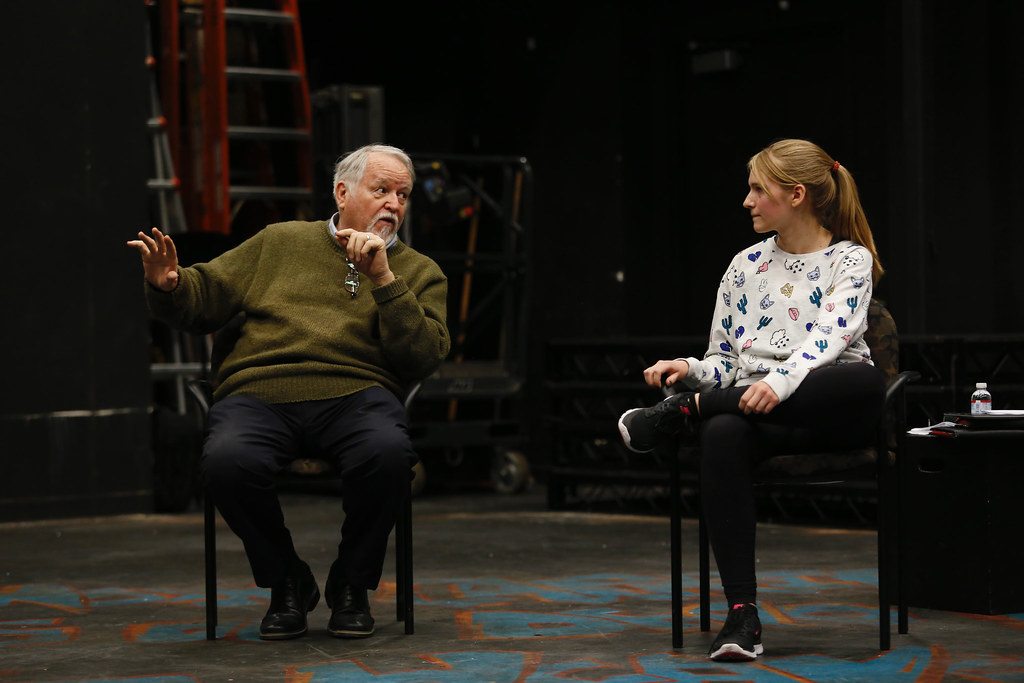 They need to understand that repetition is one of the techniques used to make an argument. It’s like a topic sentence or a thesis statement that you state and then develop, Matthews said.
He told the class they need more breath for delivering lines in Restoration works, as the sentences are longer. Restoration actors also need a large vocal range. Here, women have an advantage, because men – particularly Americans – don’t like to show that they have an upper range, he said. British actors aren’t as inhibited, “because they don’t have that weird frontier American thing” where men want to talk in gruff, lower register tones.

“We forget how important intonation is,” he said. “Not just the meanings of the words, but the actual pitch – the melody of our speech, so to speak.

“The melody floating above the line of words is crucial to understanding. Finding the melody of that speech and having the vocal range to play that melody is very important.”

Matthews then listened to a student’s Restoration monologue, line by line, and unpacked its meaning, correcting emphasis, re-directing energy and pointing out transitions so the narrative made more sense. By hitting certain beats and building tension, the jokes had a bigger payoff and the character’s descriptions of her marriage suddenly became more clear.

“We never stress our own thoughts incorrectly,” noted Matthews. “When you talk to someone, you never stress the wrong word. Why? Because you are thinking the thought and you know what you want to say. It’s only when you are speaking someone else’s words that you have a tendency to stress the wrong word. You have not actually absorbed the thought. It’s the Harold Hill ‘think system!’ You must think the purpose of that statement very hard and have an instrument that’s available and the intonation will come out right.”

For Restoration and Shakespeare texts, he advocates reading an edition with good critical notes and then trying to paraphrase every sentence. Listen carefully to the intonation of your paraphrase, and then apply it to the original text.

Matthews, en route back to Broadway, left the class with a bit of career wisdom. “Never abandon the theatre. Always do one play a year. Theatre trains you for the long haul.”