New Yorker theatre critic Hilton Als, winner of the 2017 Pulitzer Prize for Criticism, still finds it surprising that writing is a public event for him. When he began writing as a child, he would hide the notebooks containing his work.

Als told a rapt, standing room only audience in Cammilleri Hall Feb. 7, that it took him until he was 30 to grow into his writing voice. “My voice was always there, but I didn’t know what the story was. Or I was afraid of what the story was.” Developing the ability to write well, like learning to play an instrument, involves many years of practice and loneliness, he said. “That’s what makes writing such a profound occupation. It really requires your complete dedication and humility. And when you grow into your voice and find your voice, there’s your joy.”

Als spoke with Dean David Bridel of the USC School of Dramatic Arts and Mary Daniel, a PhD candidate in creative writing at the USC Dornsife College of Letters, Arts and Sciences for a Visions & Voices event, “The Fairings of a Literary Mind,” organized by the School of Dramatic Arts and USC Dornsife. Earlier that day, he spoke at a master class with graduate and undergraduate students in theatre, arts journalism and English.

Dressed in gray with a jaunty green scarf tied around his neck, Als was by turns witty, serious, gossipy, thought-provoking and personal as he talked about theatre, race, cultural criticism and curating art exhibitions, which is something he has been doing in recent years in addition to his work in the theatre.

He started by expanding on a description he gave of Michelle Williams’ work in the 2016 play Blackbird, when he wrote: “She has control and, even more interesting, no control over where the role carries her.” Bridel called it “an exquisite description of acting,” and Als elaborated. “What I look for when I go to the theatre is a level of imagination that in some ways transcends the director and the script,” he said. For Williams, “it had everything to do with her not being ambivalent about her intention on the stage.”

Performers really write with their bodies, Als observed. “They take writing and make it something other than that which is on the page. The strange alchemy they are able to do has everything to do with the force of their imagination and also energy. These two things together contribute to a great performer.”

Als said that actors have only their history and observations of the world to draw upon, which is similar to learning how to play poker really well. “You have to make that decision so quickly that it’s beyond me.” He told of Meryl Streep describing an early audition with Joe Papp in which Papp suddenly asked her if she could do a Southern accent. Streep remembered listening to Dinah Shore on the radio when she was a kid and pulled up that accent. “That would take me two days to get there,” laughed Als. “So [actors] are in touch with the cosmic reality of life and also the memory of life that writers would excavate. They embody what we excavate.”

Als talked about being free, in his non-review writing, to experiment with genres and write according to the laws of poetry, “which means there is sound and meaning,” and not a strict delineation between fiction or nonfiction. Writing the book for an exhibition he curated, Alice Neel: Painter of Modern Life, which was shown in New York and Europe, “was such an enormous relief for me to make my own frame as opposed to trying to be genteel about someone else’s frame,” he said. “Because I’m an advocate of being rude in your writing. You should just be rude and really disrupt a kind of idea of what should be.”

Als is endlessly fascinated with the challenge of creating movement in words, going back and forth from memory to the present. This shifting and changing shows that we can change our minds about things and feelings, he said. 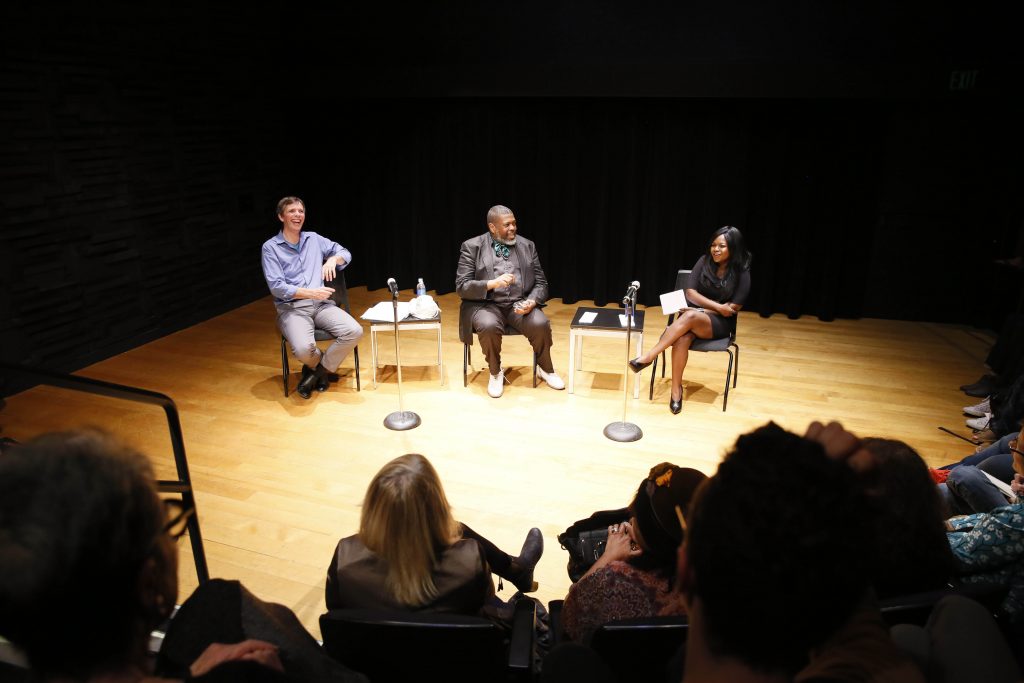 PhD candidate Daniel asked Als why he wrote that the subject of race is “endlessly fascinating but tiresome,” and he answered that he often gets strangers expressing surprise when they meet him that he is black. Said Als: “In the general scheme of things, it’s someone coming up to you and saying ‘I can’t believe you exist,’ basically. And why? That’s the question.”

Als also was asked about colorblind casting. In his review of the production of Eugene O’Neill’s Hughie which starred SDA alum Forest Whitaker (’82), Als had praised Whitaker’s performance, and written about “complications inherent in this casting choice that make this production meaningful.” Asked to explain, Als said that successful colorblind casting needs to pay attention to what is dramaturgically happening in the play and have some relationship to contemporary life. “It has to apply to something that’s going on in the world.”

He described “one of the most terrifying nights in the theatre I’ve ever had” watching Zoe Caldwell play an Upper East Side hostess in David Adjmi’s one-woman show Elective Affinities that dealt with race. “The racism was insidious. This woman and this script is so brilliant. She is this nice lady you are having a sandwich with. You are taking her out to tea and she’s saying the most vile things imaginable in the politest tones. And that’s real political theatre.”

He undoubtedly introduced many in the audience to the playwright Adrienne Kennedy, 86, when he read from his appreciation of her work from the Feb. 12/19 issue of The New Yorker. “She wrote these very intense, beautiful pieces from 1961 through now,” with the atmosphere of her plays generally taking place in the interior life of a woman of color. He read some of the dialogue from her Funnyhouse of a Negro, The Owl Answers and A Movie Star Has to Star in Black and White. “You cannot write like that if there is not joy about the sound of those words. She wants to reach all the people. That’s joy to me,” said Als.

When asked by a student what questions young writers of color should be asking, Als had a ready answer: “The questions that have plagued, delighted and changed all of our lives as artists, such as who am I, what does my ‘I’ mean in this universe? You have to begin with yourself, ask yourself those hard questions first.”

When asked about the future of cultural criticism in a society where everyone’s a critic on the internet, Als said that while he is happy people are using and engaging in language, what makes him unhappy is that there is not discipline in the writing. “Because a story happens to you doesn’t mean it’s a story,” he said. “Because you have an opinion doesn’t mean that it’s valid or that I want to spend time thinking about it. It has to be transformative. You have to transform, say, the experience of looking at a film using language that is going to be somehow equal to the experience and joy of having seen something. It hopefully will transform the person and change my mind.”

He drew knowing laughs when he gave a staccato litany of advice to young writers who want to become the voice to their generation. It is the same advice, he said, that he gives his students at Columbia University School of the Arts, where he teaches writing.