A shy, mild-mannered boy growing up in the Mayberry-like little town of Farmville, Virginia, doesn’t sound like the background of the creator of Breaking Bad and Better Call Saul, shows that explore the dark recesses of human behavior, but that indeed describes Vince Gilligan’s early life.

When he was 10, Star Wars came out and from that point on, he knew he wanted to make movies. “I was a kid who didn’t go to prom,” he admitted. “I was home making monster masks and writing scripts.”

Gilligan shared his creative history with USC School of Dramatic Arts students and others on Jan. 26 in an evening program at Bing Theatre. Co-sponsored by the USC Program Board, it was one in a series of Spotlight@SDA programs organized and moderated by Dramatic Arts interim dean David Bridel. 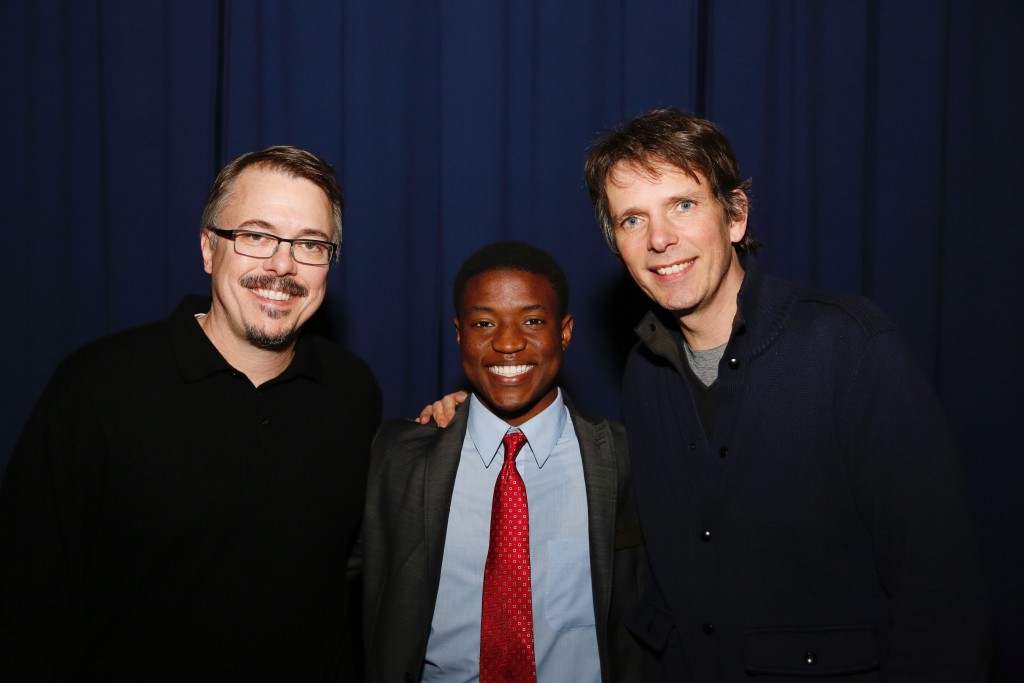 He told the packed house that he spent six years writing film scripts, and when he finally one got produced, Wilder Napalm, it bombed. “It felt like a crushing defeat, but it turned out to be the best thing that could have happened,” Gilligan said. After he lost his Writers Guild insurance and things were looking dire, his agent mentioned he was related to Chris Carter, the creator of the hit TV series The X-Files. Gilligan, a fan of the series, asked to meet him. “It was falling ass backward into good luck,” he recounted. “I was not nervous, not full of anxiety, because I really just wanted to shake his hand.” Gilligan did bring a story idea to pitch, and the regulars in The X-Files writers’ room fleshed it out, turning it into something usable. He left the room with a freelance episode to write, which morphed into a long-term job writing for the series, which had a notorious reputation for being sink or swim for writers. The deadlines were tight, and many writers didn’t make it past the 13-week probationary period. Gilligan was so convinced that he wouldn’t stay on the show that he left food in his house when he left Virginia to join the production.

Although Gilligan had gone to NYU’s film school, “truly the best film school I went to was working seven years on The X-Files,” he said. “A love of cinema was exhibited by all the people on the show. It felt like making one movie a week.”

On The X-Files, “I would live and breathe those characters. I could hear them talking in my head like I was a court stenographer and just typing down what they’re saying.”

When The X-Files had been off the air for two years, Gilligan was casting about for another writing idea when he read a newspaper article about a man who built a meth lab in an RV and drove around. Gilligan immediately thought, “What would it take for me to do that in my life? The most boring, plain vanilla guy doing the most reprehensible thing.”

Thus was the character of Walter White born. “I was gonna take Mr. Chips and turn him into Scarface.”

Gilligan treated Breaking Bad as a short-term experiment, thinking that the series lasting two years would be good, but that it couldn’t possibly extend for more than three. “I had no idea how big this would get,” he admitted. “It was courage born of naiveté. I’ll never again have that.”

Dealing with grim topics such as cancer, meth and death in Breaking Bad, “I put in as much humor as we could legitimately do.” Similarly, he gravitated toward casting actors, such as Bryan Cranston and Bob Odenkirk, who were known for comedy. “If you can be funny, you can be dramatic,” Gilligan opined. “I have a little bias toward comic actors.” 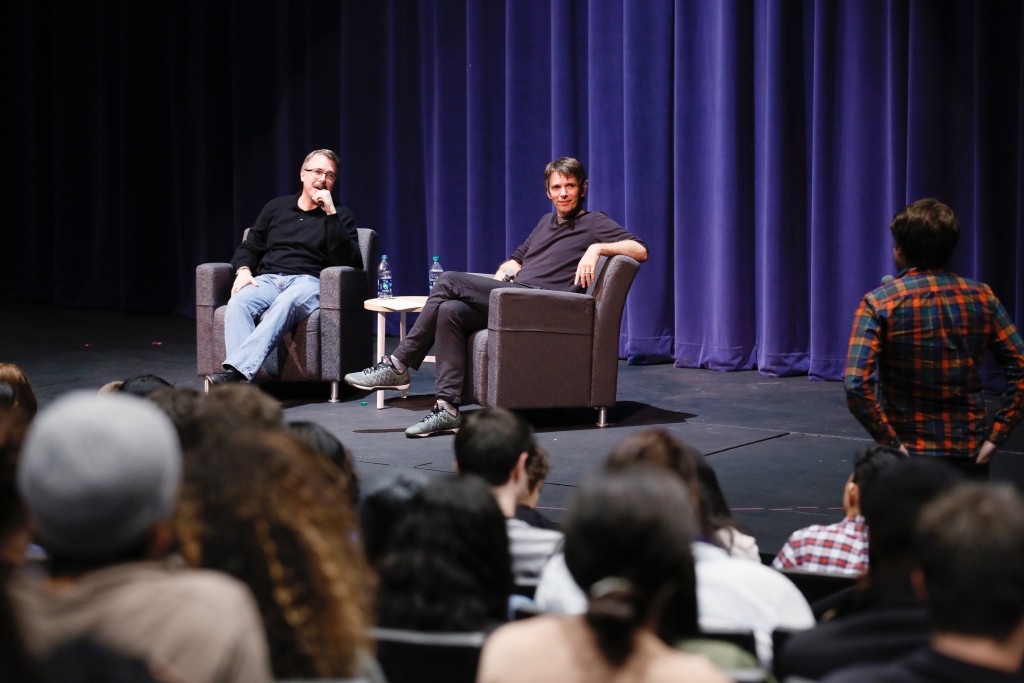 Cranston, he said, “is a hilarious guy.” (Told that Cranston had occupied the same seat a week earlier in Bing Theatre for another Spotlight@SDA event, Gilligan worried aloud whether he could be as witty.) Cranston is a practical joker and when he learned that Aaron Paul’s character on Breaking Bad, Jesse Pinkman, had originally been scheduled to be killed off at the end of season one, he tormented Paul weekly by implying that Jesse’s demise was at hand. Cranston would arrange to always get the script first, and then he’d hold it up and tell Paul, ‘Oh, buddy, I’m sorry. But it’s a great way to go out.’

Gilligan was generous with his time, answering questions about The X-Files, Breaking Bad and creating shows for a very engaged audience. Some of the questions and his responses:

How to write the first line of a pilot script? I’d love to have a great pithy answer for you. There’s probably more scene description than dialogue. Don’t be afraid to go slow, but by all means hook the audience as soon as you can. They sound like opposing ideas, but they aren’t.

On collaborating with other writers, actors and crew. The odds of you always having the best idea are slim. Stop keeping a mental tab of whose idea it is. The single funniest line in Breaking Bad came from our focus puller. It’s a group effort. It takes a village.

How do you get your stories out in the world? To be a good storyteller, you have got to be really honest. If you start with ‘I want to tell stories that others will want,’ you are looking through the wrong end of the telescope. One positive thing is that there are a whole lot more outlets for stories now.

On keeping a series going for years. Slow it down. Don’t go any faster than you have to. You’ll run out of story and have to do crazy, wacky stuff to keep going. And always be ready to throw away a good idea for a better one.

How do you flesh out characters? A lot of the fleshing out comes from the actors. Think of what this person wants right now and what is standing in their way. What are they afraid of? Ask your characters what they want to do next and then put obstacles in their path.

How do you know when it’s time to end a series? I had nightmares about ending Breaking Bad. I went the extra mile on it, as it would have broken my heart if we had gotten that far and gone downhill in the last three or four episodes. Of the last eight episodes, I only wrote the final one. The last scene was the hardest to write. I kind of teared up writing the ending.

Other advice. If you want to direct, take an acting class. I should have done that. For actors: When preparing, read the whole script. There are actors who read only their parts! And keep in mind that you don’t learn from success. You learn from failure.