Two recently released documentaries showcase a handful of exceptionally talented young actors and singers, each chosen from thousands of hopefuls across the country. In each documentary, one of the featured performers is a musical theatre major at USC’s School of Dramatic Arts.

In the HBO Max documentary Homeschool Musical: Class of 2020, SDA freshman Alana Bright is one of seven students shown coping with a senior year of high school upended by COVID-19. Bright’s compelling voice and personal story were selected by Broadway and TV actress Laura Benanti from thousands of high school seniors who videotaped themselves last year singing favorite songs and posted them to Benanti’s #SunshineSongs social media campaign.

In the documentary, Bright sings H.E.R.’s “Lift Every Voice and Sing/I Can’t Breathe,” a mashup of two songs that have special resonance for her. The first is considered the Black National Anthem and the second is about the death of George Floyd. His death was intensely personal to Bright, as she knew Floyd when they both attended the same church in Houston.

In the Netflix documentary Giving Voice, which was executive produced by Viola Davis and John Legend, SDA sophomore Nia Sarfo was filmed, along with five other high school students, as they made their way through the regionals and finals of the 2018 August Wilson Monologue Competition. Every year, thousands of students nationwide perform monologues from the late Wilson’s 10 plays, known as The American Century Cycle. Each of these plays celebrating Black heritage is set in a different decade of the 20th century, and each is filled with the poetry of everyday language.

Sarfo’s searing portrayal of Molly Cunningham from the play Joe Turner’s Come and Gone won her first place over more than 400 entrants in the Chicago regionals and second place in the national finals in New York City.

Both documentaries give screen time to the life stories of the two young women, filming them at their homes and giving them the opportunity to talk about their artistic paths and the importance of Black culture and representation on stage and screen.

A snapshot of these superb documentaries can be gleaned from their trailers: Homeschool Musical and Giving Voice. Below, in conversations with Bright and Sarfo, the students talk about the impact these films and their USC studies are having on their lives.

Alana Bright: “We actually got to say what our hearts were feeling” 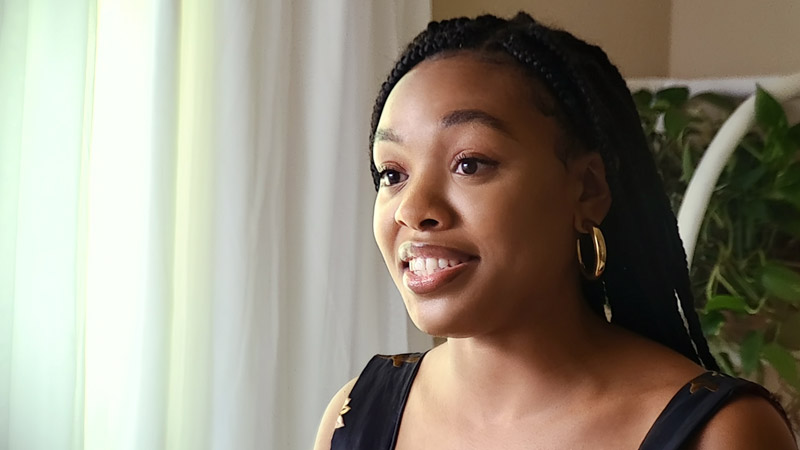 Still of Alana Bright in the documentary Homeschool Musical: Class of 2020. Courtesy of HBO Max

With her high school closed due to COVID, Alana Bright sang her submission to #SunshineSongs on the balcony of her mother’s apartment in Houston. She had a friend accompany her on guitar, and she belted out the Etta James standard, “At Last.” Neighbors on other balconies shouted their approvals.

When she received a call saying she’d been called back for the project, she misunderstood and thought that meant she was in. In subsequent Zoom calls with producers and Laura Benanti, she was relaxed and repeated descriptions of her musical and social interests. When Benanti finally told her, “Congratulations, you’re in the cast of Homeschool Musical,” Bright was thinking, “huh?” not comprehending she wasn’t in it before. She quickly said, “Oh, thank you,” realizing her mistake. “It did make the whole thing way less nerve wracking,” she said with a laugh.

Once in, Bright sang the H.E.R.’s mashup, and sent the producers a document laying out that she’d like her segment to focus on the Black Lives Matter movement and exactly how the music video could be filmed, including dramatic shots of her surrounded by the typed names of Black Americans who have been killed by the police. “It was a topic I was so passionate about and I just knew the vision that I had,” she said. “The producers blessed me and let me take the reins.”

Part of her video was shot in New Braunfels, Texas, a small city where Bright’s grandparents live and where she had spent three years in middle school. It was where she stayed during much of quarantine and where she and her family protested George Floyd’s murder, with only two other residents joining in. They endured jeers and public backlash, but Bright was resolute. “I spent a long time being silent in that city,” she said. “I needed to use my growth and the woman I had become for somebody else who may be there in the same situation [when] I was at 12.”

Since the documentary was released in December 2020, Bright has heard from a few casting agents and had some video auditions as a result. “This opportunity was such a blessing and I’m honored to have it find me,” she said. “I hope it brings encouragement to other people who look like me and feel like me in the world we live in. Sometimes Black students and other students of color and people who feel oppressed feel imposter syndrome when it comes to higher education. I hope this documentary is their sign that you belong here.” 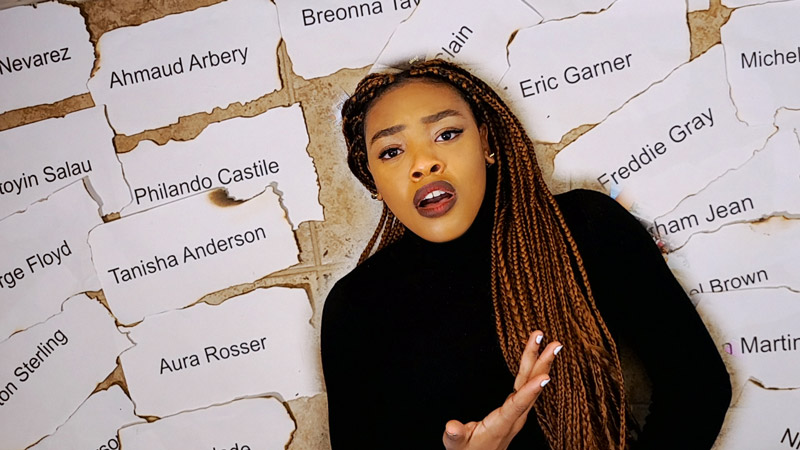 Bright said that the cast of Homeschool Musical has stayed close, albeit virtually. “The seven of us and Laura, we’re family,” she said. “Our group chats go nonstop.

“We found each other in such a pivotal time in a young person’s life,” she observed. “We had all gone through this pandemic together. Our high school careers kind of ended abruptly. We were all starting our first semesters of college, some at home, and all still secluded because of COVID. This production, where we actually got to say what are hearts were feeling, brought us so close.”

Bright is in SDA’s second cohort of musical theatre students. She studied acting, dance and voice at Kinder High School for the Performing and Visual Arts in Houston, and came to USC for an audition weekend. “I wanted to be at a place that was open not only to give me an education to become a better performer, but give me an education to become a better artist and activist and push the boundaries of what it means to be a musical theatre performer,” she said.

“Musical theatre is an art form rooted in Black practices and Black dance and Black culture that has been stripped away from its roots. I want to bring that representation back to the stage and screen and diversify what musical genres get to be presented and what demographics get to come see shows and be presented in shows.”

At USC, “from the moment I stepped on campus and went to audition weekend, it was just impossible for me not to feel at home and welcome and feel that this was the education that wanted me the most and not the other way around.” 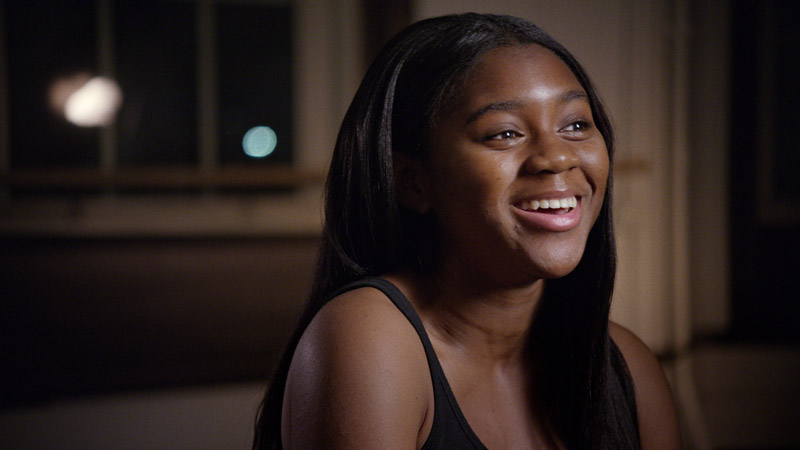 In her elementary school in Chicago, as one of the few Black students in her classes, Nia Sarfo was so afraid of being judged that she would sometimes not speak a word until she got home. It was performing on stage that set her free.

And it was the words of Pulitzer Prize-winning playwright August Wilson that truly gave her a voice. When the “magnetic and talented” Sarfo was profiled in OprahMag.com as a result of being featured in the documentary, she said the playwright’s writing makes her feel she can do anything. “Like everything I’ve ever been told about Black women, and negative stereotypes – I defy all of that in the second I pick up any of his books. I feel like I have a voice.”

When she was 9, the child with a vivid imagination was thrilled to have her mother take her to see the film The Princess and the Frog, with Anika Noni Rose as Princess Tiana. “To see a Black princess and see how regal and elegant she was in her melanin with her crown on. I want to be that!” she told herself. Two years later, she saw Viola Davis on screen and was similarly transfixed.

Her school produced plays, and the silent and isolated Sarfo wondered what it would be like to be elevated on stage and command the attention of others. She mused: “What would it like to finally have enough power that people look to you for a response?”

Her first speaking part came in middle school, where as Shere Khan, the tiger in The Jungle Book, “I felt like people were seeing me for the first time,” she recalled.

She went on to the Chicago High School for the Arts, where she would star as Marian Paroo in The Music Man and Danielle in Bring It On. Her acting teacher introduced her to August Wilson and the competition, and she entered when she was a sophomore with a monologue from Jitney. The following year, she dug into a speech by Molly Cunningham from Joe Turner’s Come and Gone.

Sarfo has read all 10 of Wilson’s American Century Cycle plays, and her favorite remains Joe Turner, partly because of her journey with it in the competition. “But it was really the way he was able to capture women in the play that did it for me,” she said. “After picking up Joe Turner, I was like, yeah, I definitely know this story like the back of my hand.” 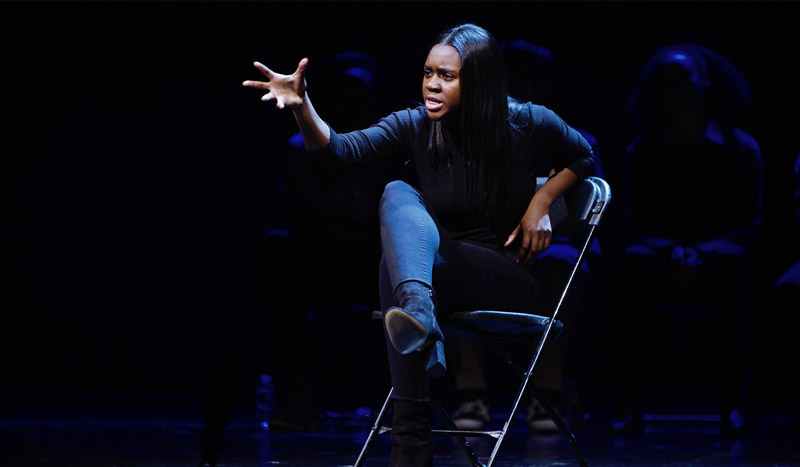 Sarfo said she was unaware that the film crew was focusing on her until after she won the Chicago regionals. “They asked if they could film this and that, and everyone said ‘sure.’ We do the work, no matter who is in the room,” she said.

“When you think about a competition, you think everybody’s in it for themselves, but it was a collaborative experience and did not feel like a competition at all,” she continued.

“Looking back, just being able to sit and watch these incredible students perform, I learned so much and I was able to see how August Wilson had an importance in their lives as well. That was really powerful for me because I had known the way he changed my life. He had shown me that yes, your upbringing, your culture, your race, your Blackness, it all has value. Step into that, do not lean away from it.”

After the finals in New York, which were held at the Broadway theatre named after Wilson, the documentary crew came back to Chicago and filmed Sarfo at home. The film includes scenes of her her watching a CD of her Shere Khan performance and of opening her closet where she says she keeps a dream board with all her hopes and goals. But she shuts the door before the camera can show it.

Giving Voice, which includes interviews with Viola Davis, Denzel Washington, Broadway director Kenny Leon, Wilson’s wife and others, premiered at Sundance in January 2020, and Sarfo and other five featured students were part of the festivities there. “All of us had such a ball and created such great memories,” Sarfo said. “A few weeks later, COVID would take us all from school and we had to do learning from home.”

Sarfo, who is in the inaugural SDA musical theatre cohort, currently is taking all her acting, voice and dance classes online from her Chicago living room and dining room.

“Theatre is such a collaborative work,” she said. “Being on Zoom and not having other actors directly in the space with me, it’s lonely. We’re trying to pull from each other’s energy through the screen and it’s very draining.”

However, the glowing reviews and positive public response to Giving Voice lift her spirits. One month ago, the Instagram account @StrongBlackLead ran a 2-minute video clip of Sarfo from the documentary, where it’s been viewed more than 65,000 times.

Said Sarfo: “It’s surreal – I still can’t believe there’s a documentary on all six of us and August Wilson and it’s on Netflix.”