At any given time, alumni of the USC School of Dramatic Arts can be found in key roles onstage and backstage at major Equity theatres all over the country. These skilled actors, stage managers and technical artists illustrate the talent that flows from the school. This spring three lauded productions in Los Angeles at three of the city’s top theatres – Long Day’s Journey into Night at the Geffen Playhouse, God Looked Away at the Pasadena Playhouse and Zoot Suit at the Mark Taper Forum – were enriched with a wealth of Trojan talent.

For example, Colin Woodell BFA ’14, landed a lead role in Long Day’s Journey opposite Alfred Molina and Jane Kaczmarek, and was rewarded with a swoon-worthy rave for his performance in the Los Angeles Times. Reviewer Charles McNulty went on for three paragraphs about Woodell’s “natural ease” on stage, ending with this: “The frail, almost sacrificial beauty of Woodell’s Edmund elicits a delicacy of feeling from his scene partners. All the principal actors seem to do their best work either with him or when arguing about his character’s condition.”

Woodell, who has worked steadily in films and television (Masters of Sex, The Originals, Devious Maids) since graduating, auditioned for Long Day’s Journey as a favor to his mother, who had seen a legendary production of it starring Laurence Olivier. It was the first professional theatre he has done in Los Angeles, and he relished the role, which required him to show illness, master an epic cough, get drunk and play “a young dissolute” who is “the fragile observer of the inferno engulfing his family,” as the Times reviewer aptly described him. It was a marathon of seven performances a week, with Woodell being so hyped up after a performance that he was often not able to get to sleep until 3 a.m. He was exhausted during the run, he admitted, but artistically fulfilled.

Woodell credits USC professors Laura Flanagan and Mary Joan Negro for helping him understand texts and be fully prepared for auditions, and David Warshofsky for giving students a realistic outlook on the industry.

At the Pasadena Playhouse, Andrew Dits MFA ’10, had the once-in-a-lifetime experience of workshopping a new play opposite stage legends Al Pacino and Judith Light. He was part of a seven-person cast that created new characters and had to react quickly to frequent rewrites and reblocking by playwright Dotson Rader and director Robert Allan Ackerman. Fellow SDA alum Meghan Hong ’06 was the associate lighting designer for the show. “I’ve never had more fun on stage,” said Dits. “I always want to work with great actors, and Al Pacino is the most incredible actor I’ve ever seen or worked with.”

At the Taper, Philip Allen BFA ’95, who created and oversees the school’s BFA program in sound design, created the complex sound design for Zoot Suit, a musical with 600 sound cues – far more than a typical production. Allen, who has designed sound on Broadway, for national tours, at the Hollywood Bowl and at the Taper, among many other credits, designed the show while teaching a full load. 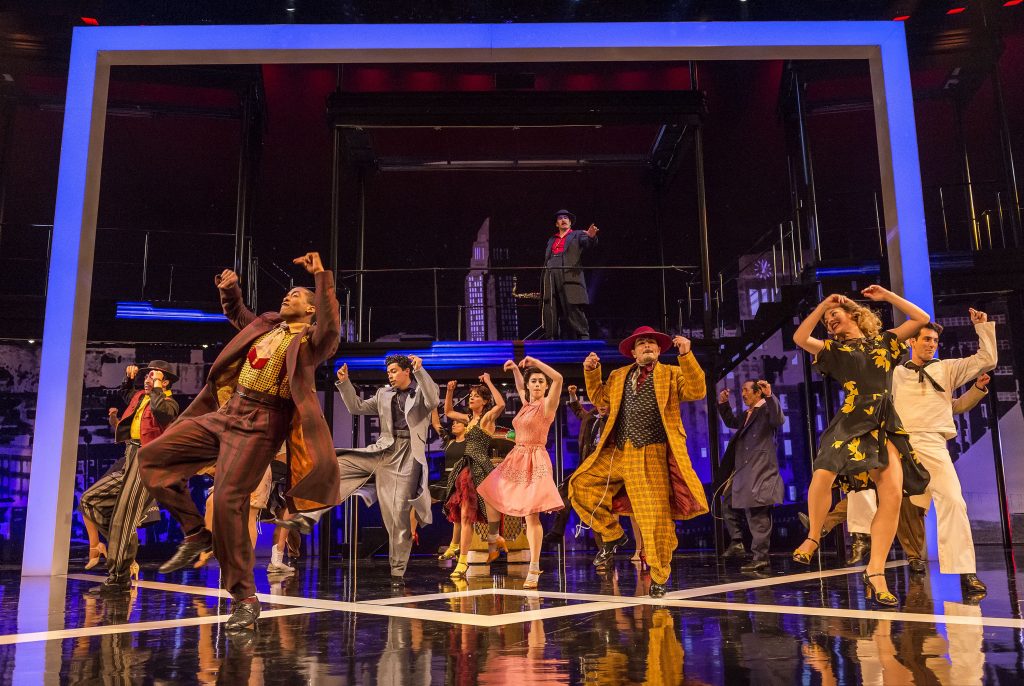 The cast of the revival of “Zoot Suit” at the Mark Taper Forum. Photo by Craig Schwartz

He and other Dramatic Arts faculty members say that their professional work enhances their teaching and is a plus for students. (Set designer and faculty member Sibyl Wickersheimer, for example, said that students didn’t really understand the process that a set designer goes through until she walked them through the historical research, text study and even the Google mapping inquiries she employed while designing a recent production of Richard II for Oregon Shakespeare Festival.)

Other USC Dramatic Arts alumni were also represented in Zoot Suit. The stage manager, who oversaw a 25-person cast, 20 songs, numerous costume changes and nonstop activity onstage and off, was Michelle Blair ’99, a veteran of more than 30 productions at Center Theatre Group (CTG). The show’s production assistant was new graduate Kelly Merritt BFA ’16, working in her first CTG show.

Both Blair and Merritt credit School of Dramatic Arts professors with helping them land their first jobs. Blair, who was enrolled in the stage management concentration at USC, was an intern in CTG’s casting office the year she graduated. After graduate school in Holland, USC professor Mary Klinger got Blair her first job as a production assistant at CTG. After assisting on several productions, Blair earned her Equity card, moved up to assistant stage manager in 2004 (for Topdog/Underdog) and then on to stage manager.

Merritt credits former faculty member David Franklin, Zoot Suit’s production stage manager, with helping her snag her first professional credit. Franklin was one of her teachers, and he made sure CTG had her contact information. After Merritt graduated last spring, she moved back home to Phoenix, but came back to Los Angeles when CTG called.

Dits, the actor at the Pasadena Playhouse, also credits a Dramatic Arts professor with helping him when he was starting out. Natsuko Ohama, who teaches voice training, paired him with a mentor, Richard Fancy of Pacific Resident Theatre in Venice, and Fancy later arranged for Dits to audition for the company. He was selected to join the repertory group, which has been an incredible experience, he said.

“I really stumbled into acting,” he admitted. He had been thinking of enrolling in the playwriting program when he visited USC Dramatic Arts, but after sitting in a class taught by David Bridel (now dean of the school), he “had a white light experience. I fell in love.”

Dits said that instructors such as Ohama, Bridel, Andrew Robinson and former instructor Charlotte Cornwell, “changed my life. I got my foundation from their training.”

Although Dits has appeared in a long list of films and television shows, appearing in God Looked Away has helped cement his decision to concentrate on theatre. He plans to move to New York City this summer and hopes to earn his first Broadway credits.