What makes a great teacher?

It’s not about heaping praise on students just for completing an assignment. The best professors certainly don’t hand out easy As. Students know their courses are intense and highly demanding.

But year after year, talented teachers at USC inspire fierce devotion and receive outstanding evaluations from their students. They find the right balance between setting high expectations and being fair and supportive. And although they might be tough, their students leave USC ready for what’s ahead in their careers and their lives.

Two of those teachers are Mary Joan Negro and Eddie Sheh. Their classes are in starkly different fields — acting and dentistry — but they’ve both been honored by the USC faculty for their teaching. They’re also two of the university’s most popular professors among students.

“Our students come to USC to be challenged intellectually and pushed beyond their comfort zone,” said USC Provost Michael Quick. “Successful teachers are the ones who, like Mary Joan and Eddie, can inspire and provoke and exhilarate.”

Indeed, those are among the qualities cited by experts at the USC Center for Excellence in Teaching as central to creating an enlightening classroom experience. Hallmarks of a great professor include being respectful and professional, challenging yet supportive, and inclusive and fair.

Great instructors set high, clearly articulated standards, said Ginger Clark, the center’s director, assistant vice provost for academic and faculty affairs and professor of clinical education. They not only expect their students to achieve those standards but also help them develop the necessary tools to reach their goals.

“They have impact because they expect students to demonstrate mastery over the content, but they also expect them to understand the process they used to get there and to transfer that knowledge to future challenges,” Clark said. “In that way, professors Negro and Sheh are teaching future leaders.”

Many of Mary Joan Negro’s students will soon enter a brutal and unforgiving industry. That’s why she helps them confront their shortcomings with honesty sometimes so blunt it can hurt.

Being criticized “can be terrible sometimes — the frustration, the sense of being exposed and vulnerable,” said Negro, head of undergraduate acting and associate professor of theater practice at the USC School of Dramatic Arts. “It’s so easy to back off and pay a compliment. But that is not really serving anyone. And I’ve never met a student who didn’t come up to the challenge.”

It’s a lesson Negro learned from a long career starring on and off Broadway and appearing in countless television movies, sitcoms, soap operas and other productions.

As a student, she was a member of the first graduating class of the prestigious Juilliard School Drama Division, an experience she remembers as cutthroat at times. Instead of replicating that at USC, she strives for a balance between encouraging healthy competition and building a supportive ensemble. Part of achieving that harmony is being able to perceive subtle changes in her students, to know when they are excited or scared, to sense just how much constructive criticism they can handle. 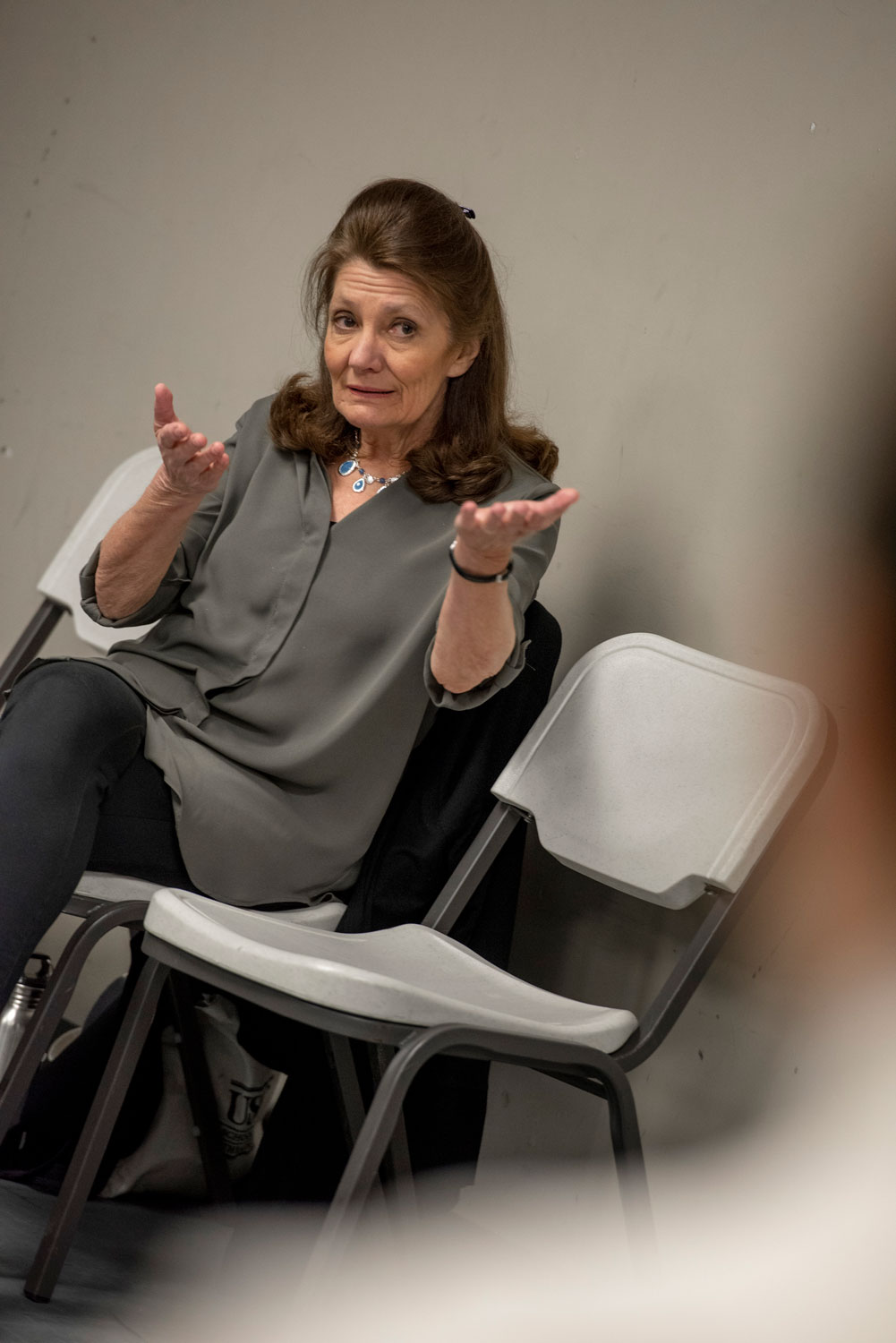 Director Jennifer Zahlit recalled being thrilled by the atmosphere of discipline when she took her first class with Negro as a sophomore.

“She demands so much of you, which I was really craving and honestly have not found since,” said Zahlit, who graduated in 2013. “After that, I decided I wasn’t taking acting classes from anyone else.”

During one memorable course, Negro broke down scenes from the play Moonchildren, digging into the subtext of each line, even each word. The approach initially felt demanding and required patience, Zahlit said, but everything came together when students presented their scenes in order at the end of the class.

“It was so powerful and mind-blowing,” she said. “It stayed with me so long that seven years later, I got the rights to direct that play in New York.”

Negro’s students also quickly learn not to miss a session or show up late. If they do, they can expect to get a flurry of calls and texts from their classmates, at her urging.

“If you are going to take her class, you better be sure you are on time and you are doing all the work,” Zahlit said. “The discipline she taught me is unreal, and now that’s what I demand from the people I work with.”

Actor Peter Mitchell also found inspiration in Negro’s exacting teaching style. Her focus on mechanics — including movement, voice, intonation and stage presence — benefited him after he graduated from USC in 2014 and moved into the professional world.

“It’s hard to put into words,” he said. “She unlocked my ability to be more expressive and grow as an actor.”

Mitchell went on tour with the popular musical comedy The Book of Mormon. A short film he wrote and produced is now in postproduction and he continues to write and act. Negro helped him establish connections in the industry thanks to her extensive network, and the two still keep in touch. “She is just a wonderful mentor and really cares about her students,” Mitchell said.

Alongside her reputation for toughness in the classroom, Negro is known for encouraging personal growth among her students. When Zahlit’s father died unexpectedly a few months after she completed her degree, she felt lost and reached out to Negro for guidance.

“She encouraged me to rediscover my creativity in order to process the grief and connect again with the core of who I am,” Zahlit said. “That was exactly what I needed. It brought about a whole new era of growth. Anytime I’m at a crossroads, we talk it out.”

Last year, she was in the midst of a stressful challenge exam, a timed test that could affect whether she moved on to the next level of training to earn her DDS degree. She was making a bridge, which fills the gap left by missing teeth with artificial replacements.

“I was just about finished and was happy with my work,” Nguyen said. “It was the best I could’ve hoped for in a timed exam.”

She went in for one last round of polishing to ensure it was extra shiny. But as she pressed the bridge to the polishing wheel, she lost her grip and the bridge shot into the air. She heard it fall nearby, but frantic searching failed to turn it up.

When Sheh found out what had happened, he jumped into action, searching around the lab and hunting through nearby trash cans. Then he pulled out the sink trap, where grit and gunk accumulate.

“He stuck his hand in there and dug around, just in case it had fallen into the sink,” Nguyen said.

Although they never tracked down the bridge, she was impressed Sheh had gone to those lengths to help her out.

“He really went the extra mile,” she said. “When I told other students my story, it turns out he had done the same thing before. That just warmed my heart.”

“You have to love teaching,” he said. “I see people who don’t love teaching, and it becomes a chore. If you love teaching, you will automatically do things to make sure you teach well. That’s the big difference.”

Asked about the incident, Sheh laughed and downplayed his heroics. He had a simple explanation for going beyond the call of duty to help his students.

Finding his calling in the classroom

Despite his success at USC, Sheh didn’t plan to go into academia. The Taiwan native envisioned launching his own practice after earning his DDS degree at the Herman Ostrow School of Dentistry of USC in 1991. But when he returned for a certificate in advanced prosthodontics, school leaders persuaded him to stay on as a faculty member. It didn’t take long for him to realize he enjoyed working with aspiring dentists.

“It’s so rewarding when you teach and can see your students understand — they picked up on something, they made a breakthrough,” he said. “It really does keep you young and energized.”

A specialist in restorative dental work like crowns and bridges, Sheh teaches methodical, step-by-step procedures that are the bedrock of basic dentistry. To keep his students’ attention, the professor of clinical dentistry searches for creative ways to share his knowledge.

One strategy he employs is to approach the material as a storyteller, presenting each technique with a clear linear progression from beginning to end. He also spends countless hours fine-tuning his presentations to ensure they feature plenty of engaging photos and diagrams rather than too much text. That helps his students understand complex dental procedures without becoming bored or distracted.

“He is painstakingly thorough,” Nguyen said. “If you look at his slides, there’s no detail left out. He’s also able to pinpoint the common errors that students make. He knows exactly what you did wrong to get a certain result and what you need to fix next time.”

Good teachers inspire everyone around them

Fellow faculty members also are fans of Sheh. Gabriela Anderson, a clinical associate professor of dentistry, calls him a valuable mentor for other instructors.

Early in her career at USC, Anderson was co-directing a course with Sheh. She handled grading and other administrative responsibilities while he delivered lectures. But soon he was pushing her to give a lecture or two.

“I didn’t really feel ready for that, but he was so supportive,” she said. “He told me, ‘Of course you can do it.’ He’s very encouraging.”

Sheh openly shares his course materials with other lecturers, Anderson said, a helpful resource for new teachers. “You can tell he does this from the heart,” she said. “He is very dedicated and generous in sharing his knowledge.”

And although he has a reputation for requiring a lot from his students, Sheh said he takes pains to set what he described as reasonable expectations — goals that he is confident his students can achieve if they push themselves.

It’s hard to argue with the results. A social media post announcing he had been honored by USC for his teaching abilities earned hundreds of likes, alongside dozens of comments from former students showering him with praise.

“I feel like all of us students want to make him proud,” Nguyen said. “He is so helpful, and we are super lucky to have him.”

Their talents in the classroom recently earned Sheh and Negro the Associates Award for Excellence in Teaching, the USC faculty’s highest teaching honor. Presented to just two professors each year, it praises high intellectual standards, engaging and innovative teaching strategies and other unique contributions to student learning.

When asked about the award, however, Sheh maintained his humble and unassuming manner. He passed along the credit to his colleagues and others in the dental school.

“Without their support, this wouldn’t have happened,” he said. “There are so many other people in the school who deserve awards.”

Negro reacted similarly — although she said it’s gratifying to be recognized for her teaching, she feels the same way as when she received acting honors earlier in her career, including a Tony Award nomination.

“It wasn’t about the opening nights or being nominated for awards,” she said. “It’s really those moments when you hear that stillness in the house and nobody coughs, and you know you got ‘em. That’s what I live for and it’s the same in the classroom.”