Skip to content
By Rickey Orr and Allison Engel January 22, 2018

Growing up in Iran, the Emmy-winning and Oscar-nominated actress Shohreh Aghdashloo was an outspoken young woman looking for change and progress in her country. In her twenties, she starred in major films in Iran, but left for England during the Islamic Revolution in 1978, with her mother’s advice ringing in her ears. “Your words are everywhere now,” her mother warned her. “Don’t look back.”

In England, Aghdashloo received a degree in international relations and hoped to enter politics. However, she soon observed that she could be much more useful portraying strong characters than being a politician. “For actors, the path was endless,” she told students of the USC School of Dramatic Arts and USC Cinematic Arts who met for their third annual mixer on Jan. 12 in the Bing Theatre, as part of the School of Dramatic Arts’ Spotlight@SDA series.

In conversation with Dramatic Arts Dean David Bridel, the actress shared insights about her background and work and gave advice to students, displaying her good humor all the while.

After moving to Los Angeles in 1987, she married actor and playwright Houshang Touzie and the two established a theatre company, Workshop 79. They took his plays and a one-woman show she wrote to national and international stages.

Her theatre work is always with her, she said. When told by a director not to think about anything, including the camera and crew, she told him she couldn’t. She told the director: “I’m a stage actress, these people give me warmth.”

It took a while for her to get cast in Hollywood. When agents told her that she was both “overqualified” and “limited” in what she could do, Aghdashloo remained hopeful and passionate, responding with: “Excuse me, I might be limited in your world, but I’m unlimited in my world.”

Her first big break in Hollywood was in 2004 with the movie House of Sand and Fog, where she played Nadi, the wife of Massoud Amir Behrani, played by Ben Kingsley. She received an Academy Award nomination for best supporting actress, the first woman from the Middle East to be so honored. At the time, her name could not be spoken in Iran, but after the nomination was announced, that seemed to change overnight. 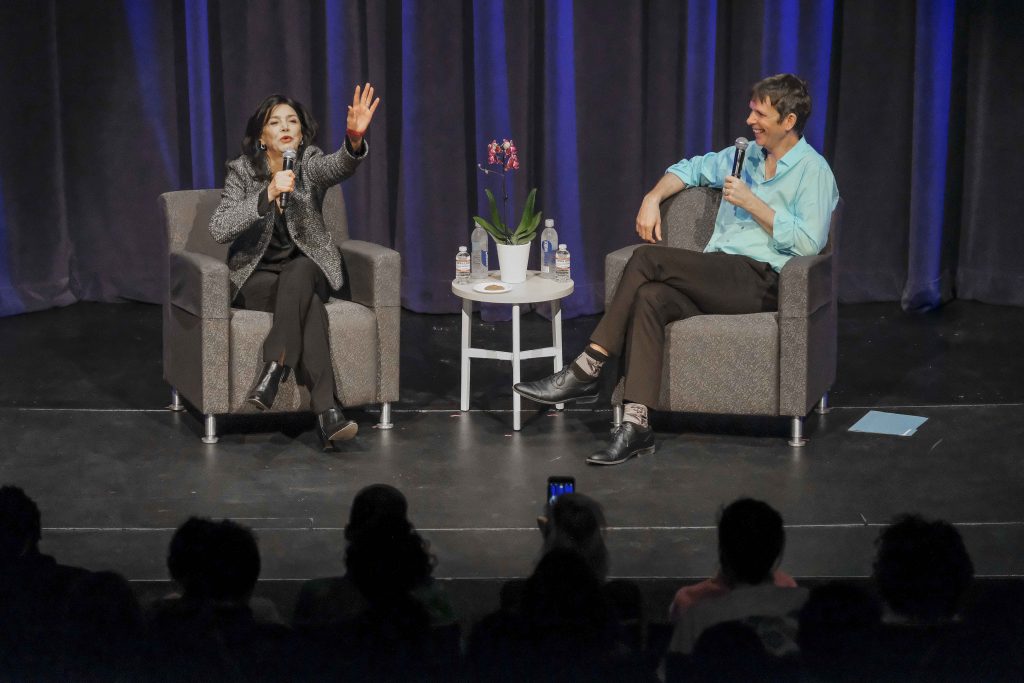 The following year she appeared on the television series 24, and has gone on to appear in the HBO-BBC drama House of Saddam (as Saddam Hussein’s wife, in a role that netted her an Emmy Award for Outstanding Supporting Actress), the Netflix series The Punisher, the J.J. Abrams-produced Star Trek: Beyond and – fulfilling her early ambition – as a United Nations politician in the Syfy series The Expanse.

Her most recent project is starring and executive producing a film, Simple Wedding, that is in post- production. It also features fellow producer Rita Wilson, a close friend of Aghdashloo’s.

Her simple acting advice to students was this: “Stop pretending,” and she graciously answered questions on several topics during the Q and A.

When a student asked if she had done any films in Farsi, she mentioned The Stoning of Soraya M. “It’s one of the films I’m most proud of and one of the most controversial,” she said. “It’s based on the stoning of a woman who was wrongly accused of betraying her husband. The husband wants to marry a 14-year-old girl.”

The film was shot in Jordan, and Aghdashloo said she was scared throughout the filming and overcome with emotions and nightmares, as the villages in Jordan looked very similar to ones in Iran.

Another student asked if she would suggest going out to lots of auditions or creating your own opportunities in order to reach the level of work you really care about. “I love the American expression ‘you make your bed and lie on it’,” Aghdashloo replied. She recommended using this expression as a justification for creating your own opportunities, instead of waiting for them to appear.

When asked, “How do you ground yourself in a difficult scene you aren’t really feeling connected to?” the actress replied with a torrent of advice: