Los Angeles is the epicenter of entertainment — the home of Hollywood and, increasingly, a hive of innovation in new storytelling technologies like motion-capture and virtual reality. Which means that a world of one-of-a-kind opportunities is sitting right in the backyard of the School of Dramatic Arts… and the School is taking advantage.

Dean David Bridel, who took the helm in 2016, came on board with a five-year plan — and new partnerships was one of his priorities. “From the get-go, I was committed to exploring how the School could leverage its position in L.A.,” says Dean Bridel. That meant two things: partnering with other schools on campus, from the Viterbi School of Engineering to the School of Cinematic Arts; and building bridges to the arts and entertainment scene outside, including various medical, community and civic organizations around the city.

Connecting at a Regional Level

One major new enterprise is an enhanced partnership with The Pasadena Playhouse. The School’s MFA in Dramatic Writing program and its director, Velina Hasu Houston, established the relationship in 2013 with the creation of the USC New Works Festival Year 3 at The Pasadena Playhouse. But Bridel and the Playhouse’s new artistic director, Danny Feldman, have teamed up to forge a deeper friendship between school and theatre company to rival leaders like Yale. 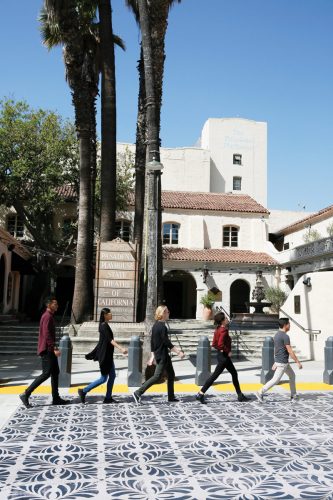 In addition to the festival for the third-year MFA dramatic writers, students in the School’s MFA acting program will begin producing a small repertory of plays in the Playhouse’s black box Carrie Hamilton Theatre, getting hands-on experience at California’s historic state theatre with professional support. The ultimate goal is to have students on the mainstage.

“This is a brand-new venture,” says Dean Bridel, “that requires a whole other level of collaboration between our School and the Playhouse.”

It’s actually a 21st century chapter in a rich tradition at the Pasadena institution.

“The Playhouse had one of the leading theatre schools in the world for a long period of time,” Feldman says, “from the late ’20s all the way through the early ’60s. The list of alums is out of control — everyone from Robert Preston and Raymond Burr, Sally Struthers, Dustin Hoffman, Gene Hackman… it goes on and on. The Hollywood studios were transitioning from silent films to talkies, and needed a place to send their movie stars … So they funded the initial school here, and it really became a destination, second only to Juilliard at the time.”

The school closed in 1969, and when Feldman took over, he wanted to revive the idea of the Playhouse as a teaching theatre — but rather than start the school over from scratch, he decided to link arms with USC.

“At every aspect of the organization — the professional work we’re doing on our stage, working with some world-class artists — I want students there in some kind of role,” he says, “whether that’s shadowing designers, shadowing directors, eventually (hopefully) being in some shows. But also, just creating an opportunity for theatre students pursuing a career to be working with a professional theatre, to be doing readings, to be doing workshops, and just to have our two worlds intermingle. We’ve already seen some great benefits, even at the early stages.”

Because of the Playhouse’s national reputation and situation at the center of the film industry, SDA students will get exposure to world-class artists and sophisticated theatre-goers.

“We did a play last year with Al Pacino starring,” says Feldman. “Jason Alexander just directed a play. So I think the opportunity of interaction is unique here because of that, because we are in a major market.”

On the cutting-edge front, SDA has a new partnership with a “digital transmedia” production company: PCB. The North Hollywood company innovates technology for videogames, virtual reality, augmented reality and other emerging art forms. It has worked with such film directors as James Cameron and on games including the Call of Duty series and Titanfall.

Starting in Spring 2019, PCB will offer a semester-long course for SDA acting students that will immerse them in voiceover and performing training in the arena of motion-capture and VOCAP — which is a new technology PCB invented that allows actors, using a head-mounted microphone, a much fuller range of expression in vocal performance. 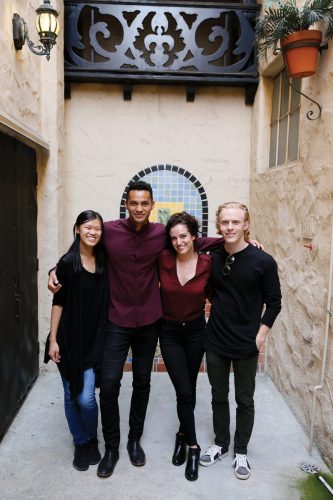 “What we’ve noticed for the past 20 years we’ve been in business is that actors sometimes have a difficult time understanding some of the technical limitations or boundaries that we have in videogames or other digital platforms,” says PCB co-founder Keith Orem. “Sometimes they’re acting inside of a box [and] they don’t know what their limitations are, so we wanted to create a program that focused more on the techniques and understanding of the industry.”

It’s an expansion of the company’s existing six-week workshops, “Are-U-Game,” and will give students a significant leg up in an exploding performance field.

“We’ve certainly had a huge benefit by being exposed to this new generation of actors that comes through, that is developing really great skill sets from the ground up,” says Orem. “Probably 70 to 80 percent of our actors are finding new work as a result of the classes, so we’ve had a really good response. When we realized that USC represents this amazing pool of actors that are looking to expand their craft in all different mediums — outside of not only being in film or theatre or television — it was a great opportunity for us to expand what we were doing, and have a more focused approach for the students.”

Beyond these only-in-L.A. partnerships in the world’s entertainment capital, the School and its faculty have reached out to several other, less obvious institutions for rewarding relationships. These include Beit T’Shuvah, a Jewish faith-based rehabilitation center for substance abuse — which provides a practical practice field for Theatre and Therapy students; and the Alliance for Community Transit-Los Angeles (ACT-LA), where students practice “invisible theatre” connected to propositions on the ballot.

On campus, beyond natural partnerships with the Roski School of Art and Design (centered on social change) and the School of Cinematic Arts, SDA partners with the Keck School of Medicine. Along with its training in medical clowning, a new initiative called ACT Together brings doctors and other medical practitioners into the same space as theatre artists in the practice of “forum theatre.”

“Together, they build fictional versions of doctor-patient interactions,” explains Dean Bridel, “which are then performed in front of a live audience of medical practitioners — who then interrogate those mini-fictions and explore other options, in terms of how to deal with difficult patients, or indeed how patients might deal with what they perceive as difficult doctors.”

There’s also an ongoing, newly-amplified partnership with the Viterbi School of Engineering, teaching improv to engineers, and an upcoming collaboration with the Leonard Davis School of Gerontology, where one of the country’s renowned practitioners in Theatre and Aging will demonstrate how theatrical practice can be a tool for offering agency and self-actualization to seniors, particularly those suffering from mental impairment and other forms of memory struggle.

Add to that a new and pioneering BFA in Musical Theatre, offered by SDA in partnership with the Glorya Kaufman School of Dance and the Thornton School of Music. The degree, which will accept its inaugural class in the fall of 2019, was an outgrowth of the recent team-up between the three schools — dancers, actors and musicians — on the massively successful, sold-out production of West Side Story.

All of these alliances — whether off-campus or not, directly arts-related or less-than-obvious — take advantage of the School of Dramatic Arts’ singular seat in the heart of Los Angeles. And they all tie into SDA’s core mission.

“One of my philosophies about theatre arts practice, or dramatic arts practice, is that it is built on the muscle of collaboration,” explains Dean Bridel. “And because the theatre arts are rooted in communication and empathy as two of their most basic values, that positions us really advantageously, as we are curious about exploring the way that we can intersect with differing disciplines and differing organizations — because we lead with those values.”