Follow Associate Professor of Theatre Practice Stephanie Shroyer, alumna Erika Soto BA ’11 and alumnus Gabriel Leyva MFA ’19 on a whimsical trip to Wonderland. The spirit of the Trojan connection follows alums out of college and into in A Noise Within’s Alice in Wonderland, performing March 1 to April 18.

Shroyer directs the production with Soto — who is a resident artist at A Noise Within — as the lead role of Alice. Leyva plays the White Rabbit and appears in the ensemble. The play, by Eva Le Gallienne and Florida Friebus, is adapted from the book Alice in Wonderland and its sequel Through the Looking Glass, both written by Lewis Carroll. Gallienne and Friebus first adapted the script in 1932 for Civic Repertory Theater in New York City. 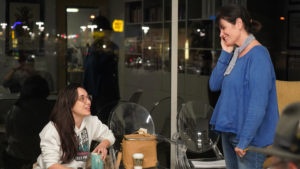 Erika Soto and Stephanie Shroyer rehearsing Alice in Wonderland. (Photo courtesy of A Noise Within)

Shroyer recently directed The Madwoman of Chaillot and The Maids at A Noise Within; and Happy End, Great Expectations and Eurydice at the School of Dramatic Arts.

Visit A Noise Within’s website to buy tickets or learn more about Alice in Wonderland.

Read a blog about the company’s first rehearsal on First Rehearsal Recap.