Second-year BA student Annika Ellwanger-Chavez shares a first-person look at her experience performing and working on a production of Urinetown for SDA’s THTR 495: Experimental Theatre Workshop, a class in which professors guide and direct students to produce new and experimental plays for a public audience. The production, which performs Nov. 20-22 at the Massman Theatre, sold out of three shows on the first day tickets became available.

As a spring admit last year, I began my second year at USC with a sense of anxious excitement for the possibilities that a full year could bring. I would now have the ability to get involved with student groups that weren’t taking members in the spring, experience fall at USC, and most importantly, I could audition for a show. Needless to say, I had no idea what was in store for me.

This semester, I am involved in a production at SDA that is quite unlike other shows I’ve been a part of. Last year, I decided to audition for a class called “Experimentals” that was set to perform Urinetown this fall, and have since been very grateful for this untraditional tradition. 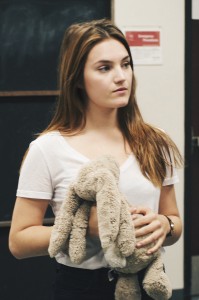 “Urinetown takes place in a post-drought world. Water is a rarity, and the first privilege to go is private toilets. Lower class citizens have to wait in line for hours, sometimes even days, scraping together pennies to buy the right to use a public restroom. The wealthy class is able to do their private ‘business’ whenever they like, as they control the rules and regulations, as well as increase the fees, surrounding bathroom politics,” explains Maxine Phoenix, who plays the character Little Sally.

I sat down with her to talk about this ‘grassroots’ style production. “Experimentals is a collaborative process, one where the actors, the tech team, the stage managers and the costume crew are all one. We’re reliant on ourselves for how the show looks, as well as how it sounds in part.” Experimentals is, in fact, a class so there is no crew or designers for the show, unless we recruit volunteers. Aside from direction from professor Dan Fishbach, musical direction from professor Parmer Fuller and choreography by Lili Fuller, an SDA alum, the cast is completely responsible for everything from the set design/construction to marketing design.

The artistic freedom of the class production lends itself to a slew of student creativity and a great deal of investment in and for the piece. Everyone is passionate about what we are doing and the energy is palpable at rehearsals (and on the Facebook page).

Along with Little Sally, Maxine has also taken on the role of costume designer. When discussing her vision for the costumes, she says, “Urinetown is highly topical, both because we all live in California where there is currently a massive drought, but also because it deals with police brutality and class division, which have been a hot media topic for the past few years. I wanted to make our show more modern, updated, and the first way to do that was through the costumes. Because Experimentals has a limited budget, most of which goes to the props and set department, I also wanted to use some of our own wardrobes to create the characters. It’s another way of bringing it into the 21st Century and into our own lives.” Throughout rehearsals and all company meetings, we have created a cohesive vision that encompasses the relevance that Maxine expanded upon. 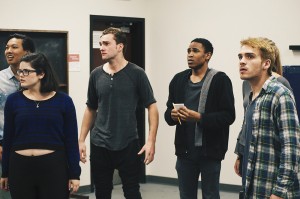 Students performing as the rich.

We are delving into this production at a time where the subject matter could not be more germane. The text exposes certain faults and quirks of humanity, along with the tradition of musical theatre itself, which constitutes a very truthful experience, despite its tongue-in-cheek tendencies. In the world of modern theatre, there is no set path towards achieving artistic honesty, and sometimes the seemingly unconventional can provide conventional truths. “The show speaks volumes about the social justice movement we’re currently experiencing, where the only two options seem to be total freedom or total oppression. It’s more complicated than that,” Maxine says.

Akin to preceding generations, the citizens of today’s world are constantly faced with the challenges where the ‘personal is political.’ Racial equality, women’s rights, LGBTQIA rights, widening income disparities and the environment are issues, among many others, that our society grapples with. These issues can worry us, anger us and inspire us. Art is a product of our unique perceptions of the world — an expression of our own humanity — and often the issues that surround us provide inspiration for creativity.

As a cast/creative team, we have collectively decided on bringing this story into the present. Through the use of costumes, set, lights, props, language and action, we are aiming to strike the audience with the comedic candor in which these pertinent issues are told.

Urinetown is the perfect vehicle to achieve this goal. Within the musical theatre world, an interesting trend of the meta-musical has begun to gain notoriety. Epic, Brechtian pieces like Something Rotten, Chicago, Bat Boy and Urinetown recognize their own literal circumstances to illuminate the greater truths of the story. Acknowledging their own artifice thus allows the audience to accept the reality, or lack thereof, on stage. 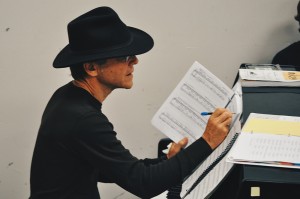 “What makes the show interesting is that it isn’t black and white. There is no purely good side or bad side — both sides have justification as well as blindness towards what they’re doing. The poor want to pee for free and overthrow the totalitarian government, but at what cost? What damage to society?” Maxine says.

To speak about these issues through the medium of a comedic, metatheatrical musical has been an entirely wonderful and eye opening experience. As the cast/crew, we are able to gain a real sense of ownership of the piece, along with awareness for all of the steps that go into putting up a musical. We have been given the freedom to mold our own vision of this show. To summarize my experience of the Experimentals class in a phrase, I would undoubtedly say: “Run, Freedom, Run.”