The School of Dramatic Arts caught up with actor, alumnus and SDA Board of Councilors member Patrick J. Adams (BFA ’04) to discuss his role as Guy Woodhouse in the miniseries Rosemary’s Baby – airing May 11 and 18 on NBC. Adams is best known to audiences as Mike Ross on the USA Network series Suits.

School of Dramatic Arts: Tell us about your character and its role within the storyline.

Patrick J. Adams: I play Guy Woodhouse, Rosemary’s husband and the willing tool that the Castevets use to position and manipulate Rosemary. In our take of the story, Guy and Rosemary are very much in love at the beginning and brought closer together through a profound and painful loss. However, Guy is ambitious and angry that his career as a writer has stalled. When Roman and Margaux Castevet bring them both into their extravagant lifestyle, Guy gets caught up in the swelling possibilities for him, his family and his writing, and his vaulting ambition leads him to secretly bargain his wife’s health and life.

SDA: How does this take on Rosemary’s Baby differ from the Roman Polanski film and the Ira Levin book?

Adams: Our version of the story is updated and brought into this time and day, and switches the location from New York to Paris. There are a lot of cosmetic changes like place and time and Guy’s profession but on a more important note, our film evolves the character of Rosemary and, in a larger sense, the role and power of women in today’s society. Rosemary in the Polanski film is slightly more naive and “along for the ride” as her situation becomes darker and more grim. Agnieszka Holland (our director), Zoe and I worked really hard to make sure that Rosemary and her situation befitted a woman and relationship of this day and age – strong, intelligent, curious and caring. Zoe’s Rosemary is not easily fooled or pushed around – the world is still intoxicating to her, as is her desire to make a child, but she also knows when things are not right and does not run or hide from her emotions or suspicions. Ultimately, I think it’s more relatable and in turn more terrifying for modern audiences in that way.

SDA: What were your thoughts when you first read the script? 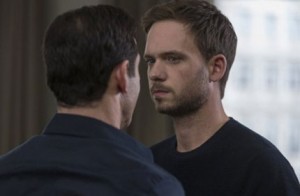 Adams: I was offered the role of Guy at the 11th hour and so my ingestion of the script was fogged by the madness of packing up my life to leave for two months in a matter of hours. I really got to sit with the script on the plane and was excited that this version of the story explored Guy’s process a little more deeply. By virtue of it being a much longer version of the story there is a lot of real estate to explore with Guy. I loved the challenge of keeping an audience attuned and understanding of what he was doing to his wife despite how terrible it seems on the surface. I liked the way the script explored motivations for wrongdoing because I think that is something we all struggle with at some point in our lives. What would you be willing to do for the things you really want?

SDA: What was your process in preparing for the mini-series?

Adams: I had so little time to prepare for this job. So in a way I would say that four years on Suits has been my preparation for this amount of immediate immersion into a job. I knew how all the pieces fit together and how I could most efficiently prepare on a day-to-day basis. I read the book during the first few days of the shoot and just really spent a lot of time trying to understand what might compel me to hurt the people I love. What ends would justify those means?

SDA: Rosemary’s Baby is on the other side of the spectrum in comparison to your work on Suits and on stage. How has your training helped you for your role?

Adams: Training has always helped me to start from scratch with a script. Over the years of training and working, I just sharpen and fashion more and more tools and learn how and when to use them. For this job I had to rely on a lot of instinct and make choices quickly and efficiently. In a way, it’s all about confidence when a job comes together this quickly. Go in with good strong choices and then don’t be afraid to try new ideas as they start presenting themselves. Preparation is one thing and adaptability is another. You have to learn to balance them.

SDA: What challenges did you face while shooting?

Adams: The schedule was pretty grueling. I had just come off seven months of Suits and a month of shooting an independent film in Nevada and was just exhausted. So the real challenge was keeping mind, body and spirit together and keeping that sense of play up. It was also the first time I had ever worked in a place where I didn’t speak the language. That was a challenge because I’m used to understanding the small conversations happening around me on a set and using them to help me understand how I can be helpful while we shoot. With this, I was in the dark most of the time. I would hear lots of people talking in different languages and then Agnieszka would come up and just give us a note and we would be going. It was a lonelier way of shooting, but I think that was helpful for me in creating Guy and understanding his state of mind.

SDA: Were you able to learn something new while working on this project?

Adams: I think I learned a lot on this job, as I do on any at this point. Suits has been on for four years now and I was recently given a co-producer credit, which means that I have a fair amount of say in how a scene plays out and what we do and what the blocking is of any given scene. But going on to a project like this, I had to really release myself from that expectation and at times really just learn to deal with being told where to stand and what to do. There was no real time for debate and discussion and scenes were often blocked before we got to set. That’s new for me and I had to learn how to adapt and inject my work and my process into a framework that was usually already built before we arrived. But great things happen when constrictions are placed on them. You never know where a good idea is going to come from and a lot of the time it’s actually not from inside your own head. Frustrating, but true.

SDA: Having reached the level of work and success that you have achieved thus far, what advice would you give to our student actors?

Adams: Work and play. Finding the balance between the two is everything. There is so much I’ve learned and it’s hard to know what would be helpful to a group of actors as everyone is different and everyone is going to have their own process. But I think that finding the balance between work and preparation and the play and wild abandon is pretty important. You have to know how to do the work and then how to let it all go when you’re face to face with someone doing something completely different. Attitude is everything in this industry and in this craft. There are more than enough things that are going to destroy your self-confidence and joy along the way – it’s a business afterall – but you have to learn to sidestep as much of that as possible and keep your eye on the prize. All of the sounds and fury can be exhausting and painful, but all that melts away when you get in front of a good actor and have an amazing director whispering in your ear and the cameras start to roll.