Forget about a snappy resume and headshot. That’s positively old school. How many Vine followers do you have? How many of your videos have gone viral? Have you taped an audition video recently? Booked any cool video game voice-overs? Hey, who’s your digital agent?

Social media mavens from a number of platforms discussed and debated questions like this during a series of panels addressing this brave new world of digital opportunities for artists with a theatre background. As the semester was winding down, SDA students, alumni and faculty spent an information-packed Saturday with a group of influencers, agents, actors and entrepreneurs — many of whom had become hugely successful through a shrewd blend of talent, digital savvy and self-promotion.

SDA students who think the culminating showcase is their best and only entry into the world of professional acting should be ready to make their horizons as broad as a virtual reality (VR) camera that Section Action Media’s Paul Becker pledged as a gift to the department at the end of his discussion.

“We are a school of dramatic arts that has been around since before the dinosaurs,” said Bridel, “and I think one of the things that is very important for us to learn about is how the landscape is changing. What we teach needs to meet what’s going on out in the world, and perhaps we need a little help in understanding it.” 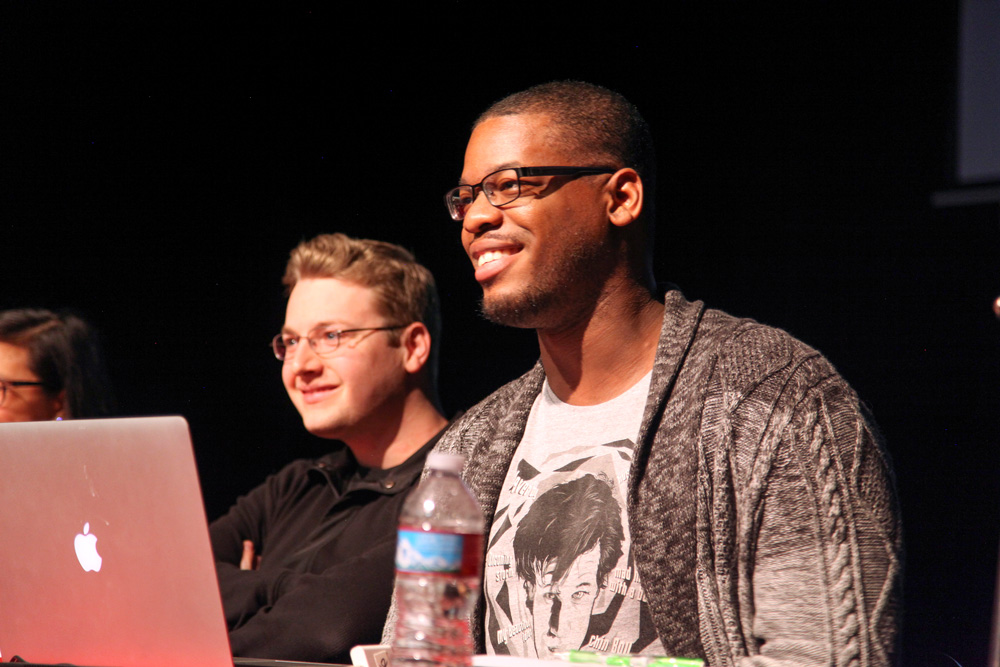 Bridel spoke these words during a discussion with Sami Housman, lead digital agent at CESD Talent. While Housman talked about how some A-list celebrities remain famous for their lack of presence on social media, an actor’s path to reaching and maintaining a level of fame will involve building and cultivating his digital brand. You may have garnered stellar reviews in Three Sisters, but it’s reaching the threshold of a million followers on Snapchat or Vine that will get a network executive’s attention, according to Housman.

“Start exploring different avenues,” Housman told the students. “Figure out ways to get a foot in. If it’s between two people for a role and one has one million followers and the other has six million followers, the person with six million is going to get the role. That’s just obvious. All of this stuff is new. Where’s it going to go? Nobody knows, but it’s not going away.”

One of the day’s stars was social media influencer Jake Paul, an Ohio teen whose iPhone-shot short videos have gained him 13 million followers in more than 85 countries. Major corporate entities now seek out Paul to use their brands in his videos. Paul came to Los Angeles both to grow his digital brand and to cross over into acting in features and TV. 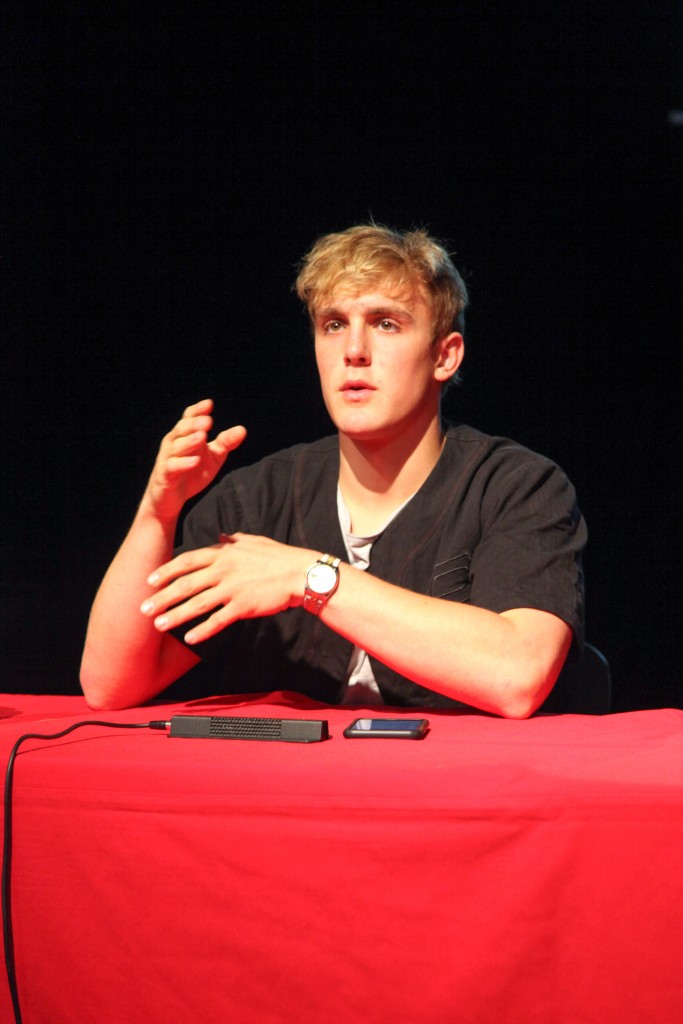 Speaking during the opening New Media’s New Breed panel, Paul delivered an upbeat message, emphasizing that anybody in the room could be one viral video away from internet stardom. His keys to success include carefully researching a given social platform, carving out one’s unique niche, and being consistent and authentic in the delivery of one’s product.

“If someone is already doing a similar idea or has a similar cast or whatever it might be, don’t do it. Come up with your new original idea and that’s how you can be the biggest,” Paul said. “A lot of people who knew me when I was moving away from Ohio didn’t think it was sustainable. They would say, ‘Do you want to be an actor?’ and my answer was ‘What’s the most relevant thing right now and what’s the most relevant thing for the future?’ The answer to that is social media, so why would I transition off of that?”

Several of the attendees confessed to being unskilled at negotiating multiple social media platforms and of being terrified by the ever-changing landscape. Sophomore Alexcea Matthews said she fell into that category. At the conclusion of New Media’s New Breed Panel, Matthews snapped a photo with Paul, which she said she planned to post on Instagram to “make some people jealous.”

“A lot of stuff goes into it that you don’t really think about, especially when you’re just kind of the voyeur watching the videos and liking the Instagram posts,” Matthews said. “I’m still a little bit terrified, but it’s kind of nice now to have a little bit of knowledge going into it.”

From Online Followings to Booking Gigs

Joining Paul on the New Breed Panel were serial entrepreneur Paolo Moreno, celebrity social media advisor Cat Schwartz and Leila Steinberg who managed Tupac Shakur and is now working with the Chicago rapper Earl Sweatshirt. Sweatshirt, Steinberg said, was a largely shy young man who made a video that was watched by 15 million people making him “accidentally famous.”

By contrast, thanks to her deep knowledge of digital platforms and her interest in the intersection of TV and the internet, Schwartz has advised or directed the social media platforms of multiple high profile celebrities. She played a key role in generating internet chat between a group of celebrities to help Charlie Sheen reach a threshold before the critical 10th episode of his series, Anger Management.

Like Paul, Schwartz emphasized the importance of tapping partnerships to increase one’s profile in the digital space.

“When you have two people with really big followings talking to each other about something, you’re more likely to get momentum,” Schwartz said. “I got 30 celebrities to get on Twitter and talk about the 10th episode of Anger Management. We go worldwide and are trending for a day. The show gets picked up and now I’m associated with a $1 billion deal that happened because of what I was able to do.”

New Age of the Artist 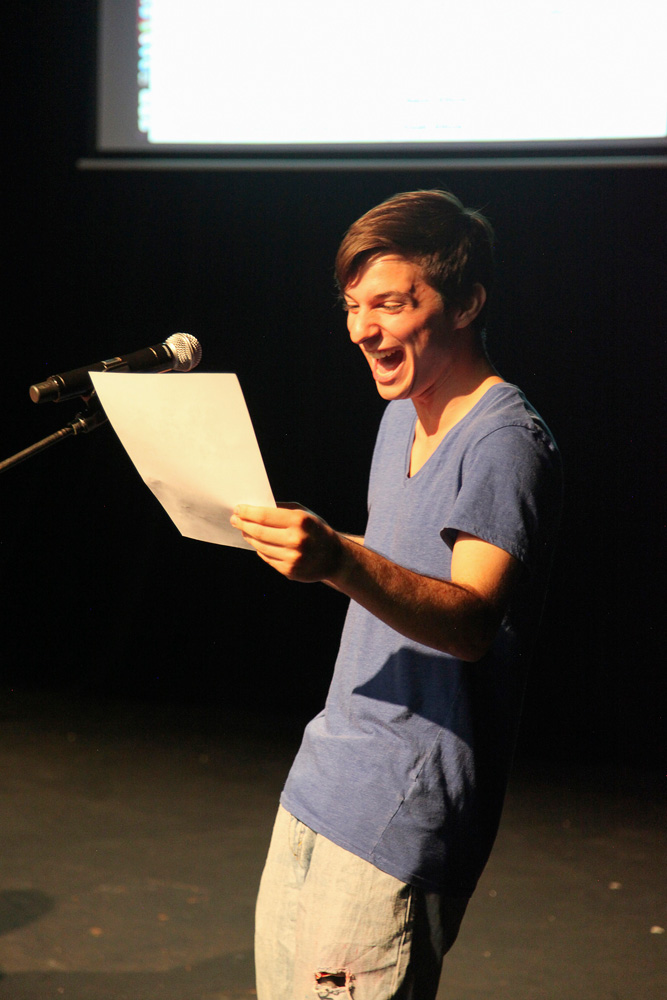 During the From Graduation to New Media Panel, instructor Debra De Liso assembled a group of USC alumni who offered practical advice on breaking into the world of video game voice-work. Gaming pioneer and producer/director Brandon Laatsch and writer-actress Heldine Aguiluz were classmates at USC, and Laatsch subsequently used Aguiluz in several of his films. Fellow panelist Jalen Cassell, a successful voice-over artist, had Aguiluz and other volunteers read the “sides” for animated video game characters, tweaking their vocalizations as needed.

In addition to uttering the characters’ signature phrases, a voice actor needs to voice the actor’s grunts, cries and death wails. Cassell instructed Aguiluz to scream as though her character were being set on fire and then dropped off a cliff feet first into a wood-chipper. “Because if you’re dropped in head first, you’ll make a very different sound,” Cassell said.

Both Cassell and Danny Bilson, who leads the interactive media and games division of the School of Cinematic Arts, noted that video game voice-over work is a viable avenue that many working actors can pursue. In the 30 years between his career-defining stint as Luke Skywalker in the original Star Wars trilogy and his work in the current reboot, Mark Hamill has played a multitude of characters in animated series and video games, Bilson noted. Hamill is a recognizable name, but according to Bilson, video game producers are no longer shelling out large sums of money to hire celebrities to recreate a movie role voice on a video game tie-in.

“Stars don’t mean anything to the gamer. They just want quality voices,” said Bilson who hopes to forge stronger ties between his division at the Cinema school and the students at SDA. “More and more now, there’s so much independent game development going on everywhere that they’re looking for new people.” 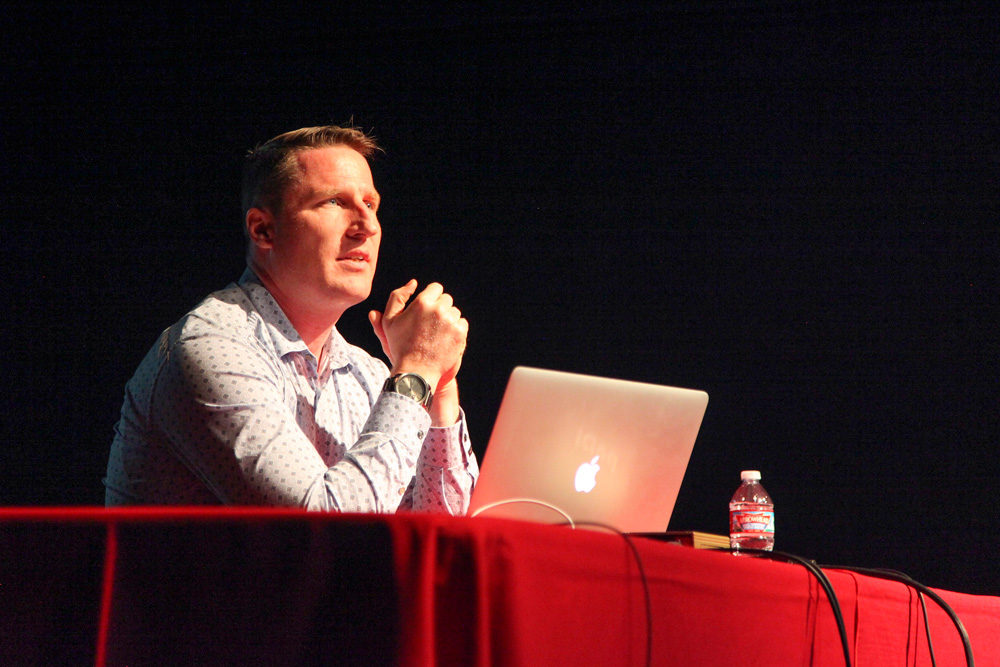 In the day’s final panel, producer Paul Becker of Section Attack Media talked about the “bleeding edge” technology of virtual reality, envisioning a world in which actors would no longer need to be in the same room to rehearse with other people. Once the technology adapts, audience members could conceivably enter the world of a performance and view it from different perspectives. For the performer who could be viewed from every angle, this may mean a new type of performance discipline, Becker said.

VR is still very much in its infancy. Becker pointed to Henry the Hedgehog created by the Oculus Story Studio. The cuddly virtual reality character felt so realistic that test audiences had a tendency to empathize with him too much.

“I think there’s a whole book to be written about the nuances that we’re going to have to learn and teach and pass on when it comes to VR,” Becker said.