Growing up in the rough Pico-Union district of Los Angeles, internationally acclaimed playwright, poet and performance artist Luis Alfaro thought that his father’s daily mantra “was the craziest thing,” he recalled in a recent phone interview. “Every morning he would say to us, ‘I’m so happy to be able to go to work. It’s an honor and a pleasure to work.’ But here I am in the East Village,” Alfaro said, “and I’m about to walk to the Public Theater, and I’m saying to myself, ‘I am so blessed to be able to go to work.’ ”

Alfaro — whose numerous awards and honors include a MacArthur Foundation “genius grant,” a Joyce Foundation Fellowship, and the recently announced Ford Foundation Agent of Change Fellowship (joining such artists as Mikhail Baryshnikov and Gustavo Dudamel) — was jetting back and forth between USC’s School of Dramatic Arts, where he is a tenured associate professor of dramatic writing, and New York’s off-Broadway Public Theater, where he is revising his play, Oedipus el Rey, in preparation for its Oct. 24 opening.

An adaptation of Sophocles’ Oedipus Rex, the production is set in South Central Los Angeles, where the inexorable tragedy revolves around Oedipus as a young Latino in and out of the revolving door prison system; it was part of a “rolling world premiere” in 2010 at The Theatre @ Boston Court in Pasadena, the Magic Theatre in San Francisco and Woolly Mammoth Theatre Company in Washington D.C. The newly revised play, directed by Chay Yew, is part of the Public Theater’s 50th anniversary season. Its sold-out run has been extended three times.

Alfaro’s affinity for “the Greeks” — plays that encompass “life, death, love, sex — everything,” as well as the great questions of the day, he said — includes his Sophocles-inspired Electricidad (a retelling of Elektra exploring gang culture in an East L.A. barrio) and Mojada: A Medea in Los Angeles, setting the Euripides classic within the context of immigration and migration. The latter was a Boston Court premiere at the Getty Villa in 2015; it had a six-month run at the Oregon Shakespeare Festival, where Alfaro is serving through 2019 as the first playwright-in-residence in the repertory company’s 83-year history; a new production of the play will open in November at Portland Center Stage.

“I’m always startled a little bit at how relevant and modern [the Greek tragedies] feel,” Alfaro said. “Every time I jump in, there’s a question that is asked and the question is very contemporary. I love that.” 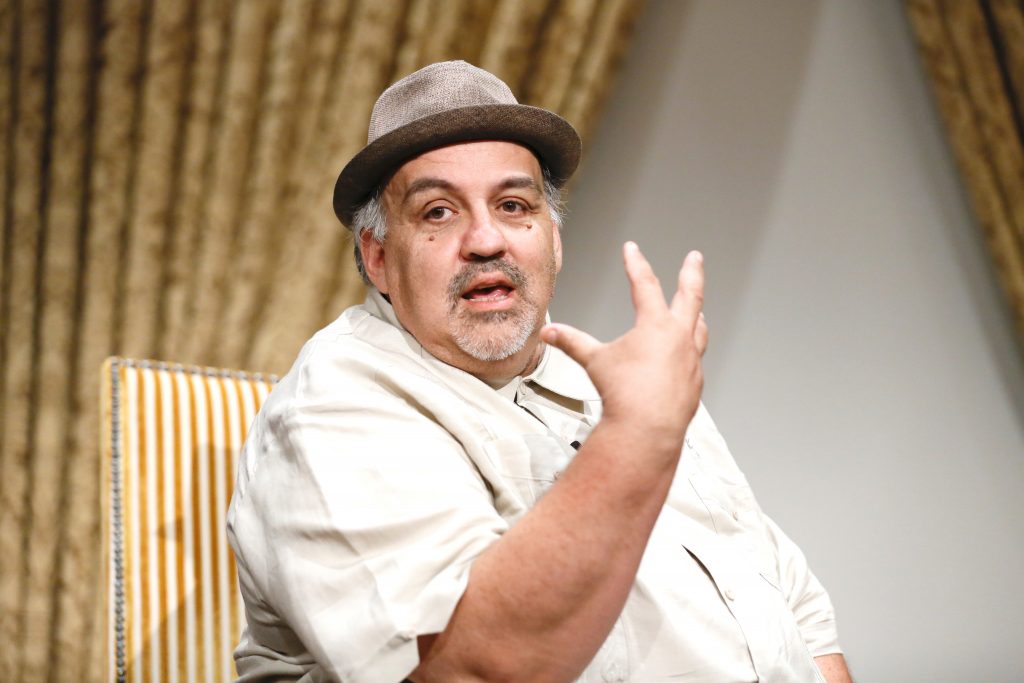 Alfaro’s life as both artist and activist feeds the authenticity of his rich, theatrical works that wrestle with large social and political questions. Indeed, during one 10-year, nomadic stretch that he describes as “a weird kind of exile,” Alfaro traveled across the country, living for up to a year at a time in different cities “in crisis,” making theatre and conducting story circles and town halls with diverse groups of adults and teens.

“I would say, ‘I am the most ignorant person here. Tell me what I need to know about your town.’ ” After superficialities about a city’s history and geography, he said, participants would begin to tell their own stories, “talking about their challenges, how the city really worked for them and who really ran [it]. All of those things have played into my plays and taught me something about people.”

At USC, Alfaro asks his undergraduates to recognize that “there’s the story you want to tell… and there’s a story that you need to tell,” because the complexity of the latter, the inevitable conflict and emotion, he said, “are what will allow you to look for metaphor, to find the poetry of your plays.” With graduate students, Alfaro said, his role is to listen and “intensely burrow into their work and try to help them figure out who they are as artists, and what they need.”

“I tend to say that I don’t teach,” he added. “The students tell me where they want to go, how they want to be and what they want to write, and then I kind of negotiate that and see where their strengths lie. What I really do is just elevate their journeys.”

Alfaro tries to instill the notion of the “citizen artist” in his students as well, by connecting them to the world, away from “the comfort of the university and its enclosure. Part of the joy sometimes is just introducing them to the city,” he said. “You can live in the world as an artist, but you also have to be a citizen. If those things are in balance, it’s going to show up in the work.”