School isn’t always fun and games, unless you’re a student in one of the School of Dramatic Arts’ Improvisation and Theatre Games classes, which teaches individual and group exercises to free the student physically and emotionally and to stimulate creativity, imagination and self-expression.

And while an acting course like this is common at the School, there is something special about faculty member Julie Welch’s Monday class: none of the 16 students are dramatic arts majors and many of the students are acting for the first time.

“I decided to take this class because I thought it would help me get out of my shell and force myself out of my comfort zone,” says student Samantha Somers. “My friends that have taken it in the past really liked it and recommended me to take it.”

Somers, a second-year critical studies major at the School of Cinematic Arts, says the improv class has helped her become more outspoken and comfortable with trying new things. 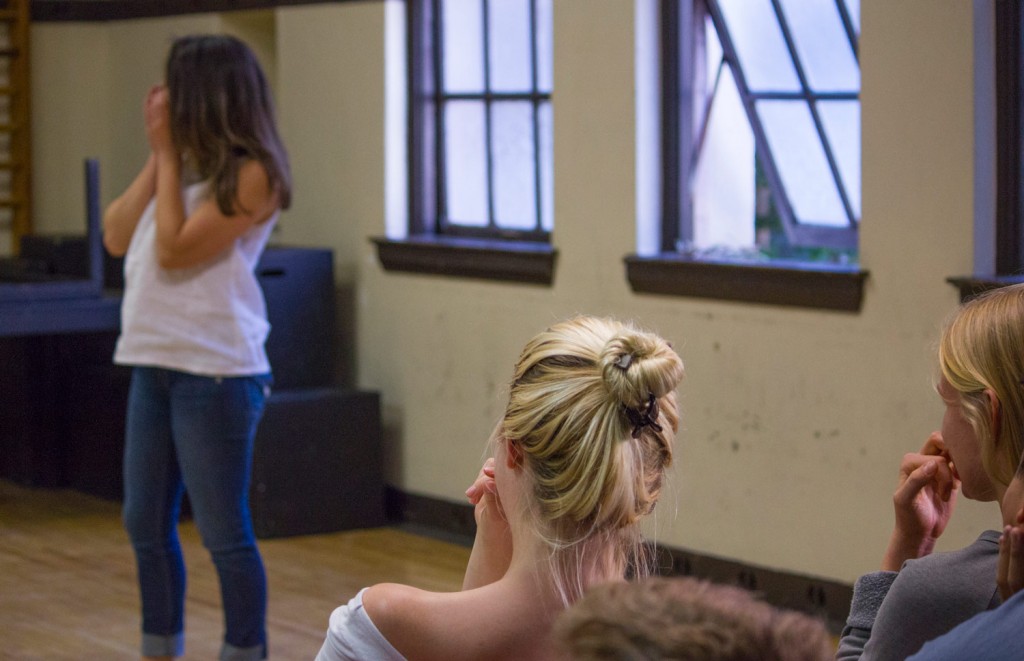 Students laugh along with performers for a game called “Academy Awards.”

“The best part of the class is the way everyone gets along and encourages each other. It is nice to know that whenever I get up to act out a scene that no one is judging my performance,” Somers adds.

For this particular class meeting, Welch introduces her students to a game called “Academy Award,” where they are tasked with improvising pivotal scenes from Oscar-worthy movies conceptualized by the class.

“Commit to the reality of these situations,” Welch tells the students. “There should be history between the two people. Feel the real emotional moments. Oh, and don’t even worry about the funny factor, these are always funny to watch.”

Two Trojans brave the classroom stage to take on the award-winning Mystic Forest, and develop characters and a plot line that explain the magic of the forest and why they’re in it. Tackling the challenge head on, the pair’s enactment has the class bursting into laughter as the scene unfolds like a Seth Rogen comedy with action sequences and punch lines that are so well placed it seems scripted.

Welch says the root of improv is communication — not just verbal, but emotional and physical communication as well. “How you say it is just as important as what you say,” she says.

Amy Okonkwo noted that the class has an open atmosphere. The undeclared freshman gained experience in dramatic arts last semester with Intro to Acting, but says the energy of this class is what she loves most. She joked that she enjoyed not having to memorize lines, but said that the best part of the class was the welcoming and accepting atmosphere created among the students.

Senior Afek Kodesh took the class for a change of pace from his Viterbi coursework, but came to realize that the class meant so much more.

“I’ve been in engineering classes for four years, and you don’t get a chance to speak out and act out,” the biomedical engineering major says. “Here, with this class, you can just be yourself.” He says the class turned out to be his favorite of the semester.

Welch says that a typical class of 20 may have about two dramatic arts majors. This semester, her class has students from all over campus – Marshall School of Business, Viterbi School of Engineering, Dornsife College of Letters Arts and Sciences, Annenberg School for Communication and Journalism and the School of Cinematic Arts. And even though none are studying acting, many say that they’re learning skills in the class that have practical applications to their majors and career paths. 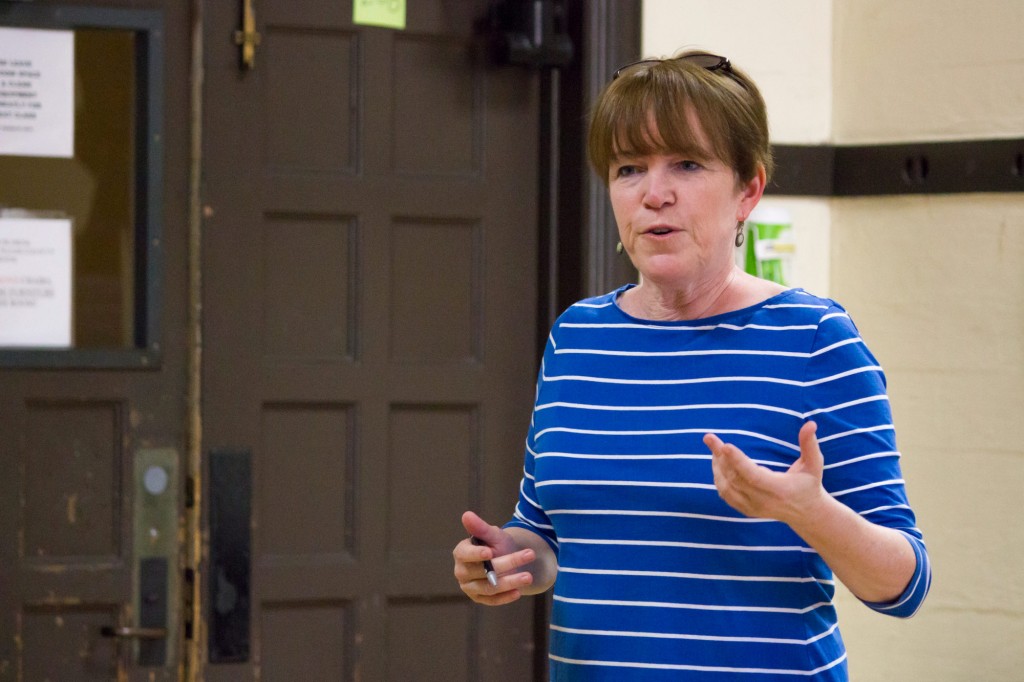 “Whenever Professor Welch throws us something to think about during a scene, we have to think quick on our feet and I feel that will be useful when dealing with production,” says Somers.

Bess Pierson, a broadcast journalism sophomore, agrees that the fast-pace and instinctive nature of the class are helping her grow in her field as well.

“Improv requires you to think on your toes, which is something I’ve always been bad at, but is necessary for journalists. I’m usually over-analyzing everything I’m about to say, but the class has helped me take a step back and be okay with not knowing what’s going to happen next.”

And for Welch, the best part is watching the students grow over the course of the class.

“The idea of helping students become more fearless and to trust themselves more is rewarding to me. Seeing over the semester, their willingness to jump up there when they don’t really know what they’re going to say or do — I know the courage that it takes, so I admire that.”

The School offers seven other sections of the Improv and Theatre Games class, allowing more students the chance to build their skills. Classes with Debra DeLiso, Eric Trules and Rob Adler also often fill quickly, with students from across the university wanting an opportunity to take the course.

Non-majors also have the chance to take other courses within the School, including THTR 365: Playwriting, THTR445: Accent Reduction for the Professional and, one of the other most popular non-major courses, THTR421: Public Speaking as Performance. Like the Improvisation and Theatre Games class, these courses give students the opportunity to grow in their field and make the most out of their education at USC.