Actor David Hyde Pierce’s visit to the USC School of Dramatic Arts began with the showing of a wordless clip of Pierce as Niles Crane in the hit TV series Frasier. In a few brilliant minutes, Pierce escalates a tiny worry about the crease on his pants into a disaster involving a couch fire, a ruined dinner and a befuddled dog.

It was a performance worthy of Buster Keaton (one of Pierce’s heroes), illustrating why the actor received an unprecedented 11 Emmy Award nominations during the show’s 11-year run, winning four of them.

Physical comedy came early to Pierce. Growing up, as the youngest of four, his first acting experience occurred in the morning as he came down for breakfast.

“At the top of the staircase, I would get shot and fall all the way down,” he told the dramatic arts students at the Massman Theatre on Feb. 10. “I’d do it most every morning,” he said, savoring the opportunity to fall and die slightly differently each time.

Pierce is in Los Angeles directing the 2013 Tony Award-winning best play, Christopher Durang’s Vanya and Sonia and Masha and Spike, which just opened at the Mark Taper Forum. Pierce played Vanya in the Broadway production and is directing three of his Broadway colleagues and three others new to the play.

The Los Angeles Times called the Taper version “a shimmering example of an out-of-town production improving the touted original,” and Pierce urged the students to see the “so funny, so brilliant” play.

Another Durang play, Beyond Therapy, was Pierce’s first experience on Broadway after graduating from Yale University with degrees in theatre studies and English. He did exactly one audition for a casting agent, performing the requisite two monologues — one serious and one funny. Looking back, he observed that “the serious monologue was probably very funny and the comic one probably was not.”

Quickly, the agent had him audition for Durang, and he was hired on the spot. He joined accomplished actors John Lithgow and Dianne Wiest in the Beyond Therapy cast, and during previews, “old women were hitting the seats in front of them with their heads, they were laughing so hard,” Pierce recalled. But the opening night review in The New York Times was toxic. By the time Pierce walked the half block from Sardi’s, where the review was read, to the opening night party, the party food had been removed and the place was virtually empty.

The next night, no one in the audience laughed. Two weeks later, the play closed. After the final curtain, Pierce sat on the stage and wept. 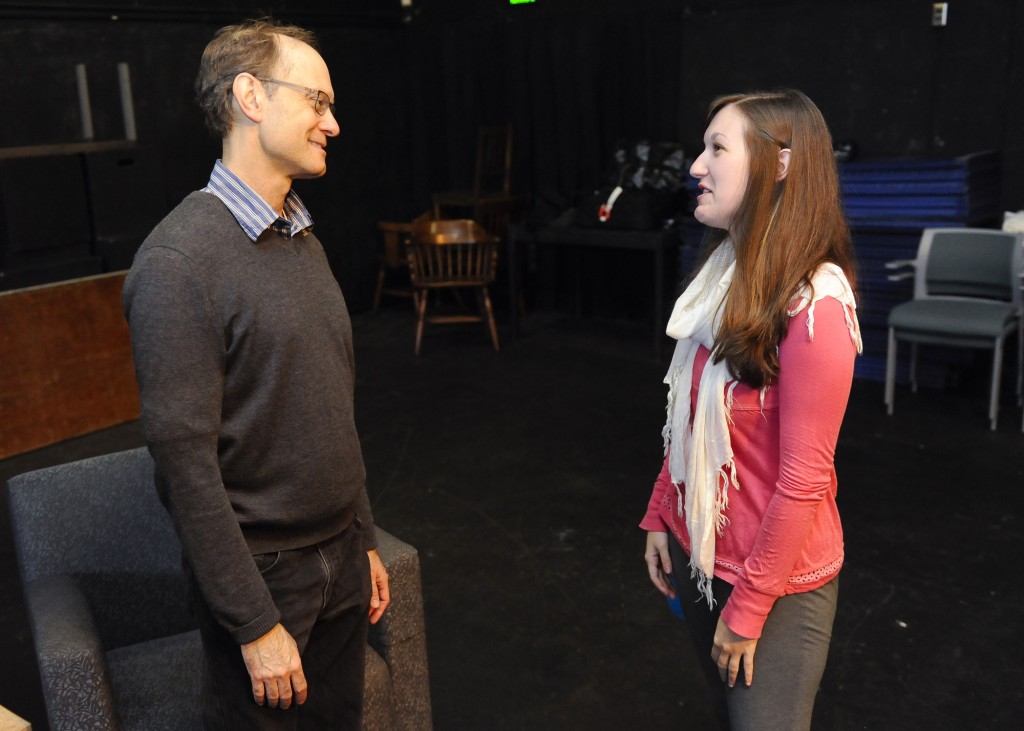 At USC, answering questions from students and assistant professor of theatre practice John De Mita (one of his roommates at Yale, it turns out), Pierce was generous in sharing observations on the craft.Since then, the acting experience has been working for Pierce. Regularly.

One tip came via director Mike Nichols, who directed him in the hit musical Spamalot. One month after opening, Nichols told the actors that now that they had discovered their favorite moves to create laughs during the performance, they should not do any of them again.

“It will free you,” Pierce quoted Nichols as saying. “If you let go, you’re not a prisoner of that laugh.”

His greatest experience in the theatre

Pierce is employing that wisdom as he directs Vanya and Sonia and Masha and Spike. The New York actors came with “guaranteed, solid gold funny stuff honed on Broadway,” he said, and they are “happily” giving up those tried-and-true moments “so it is just happening in front of you in that moment, which is what theatre is supposed to do.”

The actor spoke about his long friendship with the legendary actress and teacher Uta Hagen, author of widely respected books on the actor’s craft. He wrote the introduction to the latest edition of Respect for Acting and was a very close friend until the day she died.

He did Six Dance Lessons in Six Weeks with her, “which was like doing a two-person play with a volcano,” Pierce said. “It was the greatest experience I ever had in the theatre.”

Hagen, among other obsessions, was emphatic about the reality of props, he said. For example, she would insist on having a real refrigerator from the earliest rehearsal if that was going to be part of the finished play.

“That’s what gave her freedom on stage,” he said. “There’s a deftness in the way someone who has opened a refrigerator 100 times has done it.”

Another lesson he learned from Hagen was how to keep a role fresh. He’s starred in two musicals that each ran for a year and a half, Spamalot and Curtains, “and in both cases, I left still feeling I could do more” in his roles.

Students asked whether he watches himself in dailies (“Yes, it doesn’t bother me, it doesn’t throw me”), what acting medium he prefers (“I love the theatre, I love having that live audience”) and about his influences (“Buster Keaton, Alec Guinness, John Cleese”).

He praised the experience of acting in repertory, which USC offers to its MFA students and is something he did early in his career at the Guthrie Theater in Minneapolis.

“It’s amazing training because you have to do everything,” he said.

And he talked about the wisdom gained from working with a variety of directors, from “auteur directors who sculpt every movement” to “British directors who just yell at you” to “Rumanian directors who are very conceptual.”

Acting in Chekhov’s The Seagull for one of the latter was one of his oddest stage experiences. The director started the play in the fourth act, and the set featured a steel deck and an abundance of oil-based fog. When the actress playing Nina and Pierce hit the metal deck, slippery with oily fog, “we’re spinning around and it looked like Olympic ice dancing,” Pierce recalled. It took union intervention to change the type of fog, he said.

Fans regularly tell him that his performances or projects he’s been in have gotten them through tough times.

“I didn’t go into it as a service profession,” he said, but he appreciates how theatre expands how people feel about the world or think about themselves. Studying philosophy and literary criticism in college “deeply embedded in me that everything has to do with theatre.”

He told his attentive USC audience: “The whole richness of life feeds what you do.”

See a photo gallery from this event