When he walks into a patient’s room either at Children’s Hospital Los Angeles, the USC Norris Cancer Hospital or Los Angeles County + USC Medical Center, Zachary Steel arrives wearing a red nose and usually carrying his trusty ukulele. But since he is a working medical clown, the one item the SDA faculty member does not bring is an agenda. That’s for the patient to supply.

“Sometimes I’ll knock on the door, open the door, say hello, pull out a banana phone, make a call to my mom and say, ‘I’m busy, I have to go get a smile’ and then leave. Maybe it’s a 10-second interaction,” said Steel. “We’ve been in rooms for 45 minutes or an hour. We strive to make it feel to the patient that there is no time limit, no set time.” 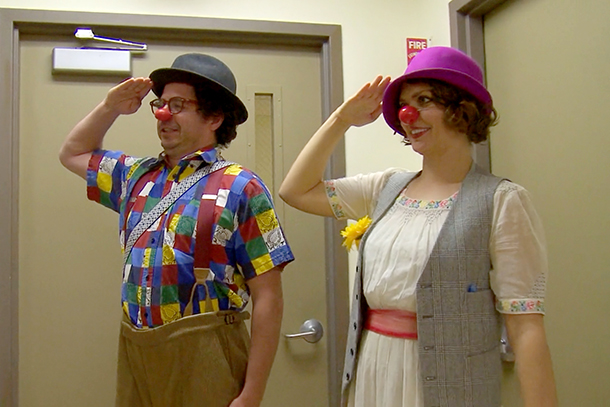 “When the clown brings that spirit of anarchy into the hospital, it is contagious,” he continued. “You can go into a room, interact with a patient and kind of transport the patient away from the confines of the sterile hospital room and bring them with you into a world without limitations, a world of imagination, fantasy and fun.”

Steel and his partner-in-clowning Caitlyn Conlin are practiced in the art of medical clowning that rests somewhere between performance and therapy. Steel has been teaching these specialized skills to students through SDA’s visionary Medical Clowning program which was introduced in the fall of 2016. This semester, the School welcomes its first group of students into an advanced class that will begin their practicum in the hospital — visiting and engaging with patients.

The practice of clowning in hospitals is used extensively by artists all over the world, but this is the first program of its kind in a university in the United States.

According to Steel, patients at the partnering medical centers have been delighted by the visits. Steel and Conlin often visit seriously ill children, and they empower the patients by giving them full control of a situation in an environment where they otherwise might feel powerless. Additionally, a skilled clown can decrease the tension and anxiety that often result from physically intrusive procedures.

Steel recalled an interaction with a young girl who had been in a car accident and had suffered burns all over her body. Steel and Conlin were asked to spend time with the patient while she was having her wounds redressed, a time consuming and frequently painful procedure. Letting the girl dictate the interaction, the clowns watched her play with stuffed animals and then started to make up songs, only to have the girl come up with songs of her own.

“The lyrics were pretty directly about her experience in the hospital,” Steel said. “For the next 45 minutes, I played the ukulele and Caitlyn played in the background as this little nine-year-old improvised song after song after song while the redressing was occurring.”

Another wonderful memory involved working with a 15-year-old boy who had suffered dementia as the result of a massive head injury. The clowns would hear the him screaming expletives at his family, but when they came in and started playing songs, the boy would soften, smile and attempt to sing along.

“You would see a change in his eyes. He would become present with us in the room, and the demons would kind of go away,” Steel said. “We had a few visits with this boy and then we had a final visit with him, we walked into the room and he didn’t really remember us, and he was laughing and smiling and making jokes with his family. He had come back to us. I don’t know what role we played in that healing process, but I like to think we played some part in it.” 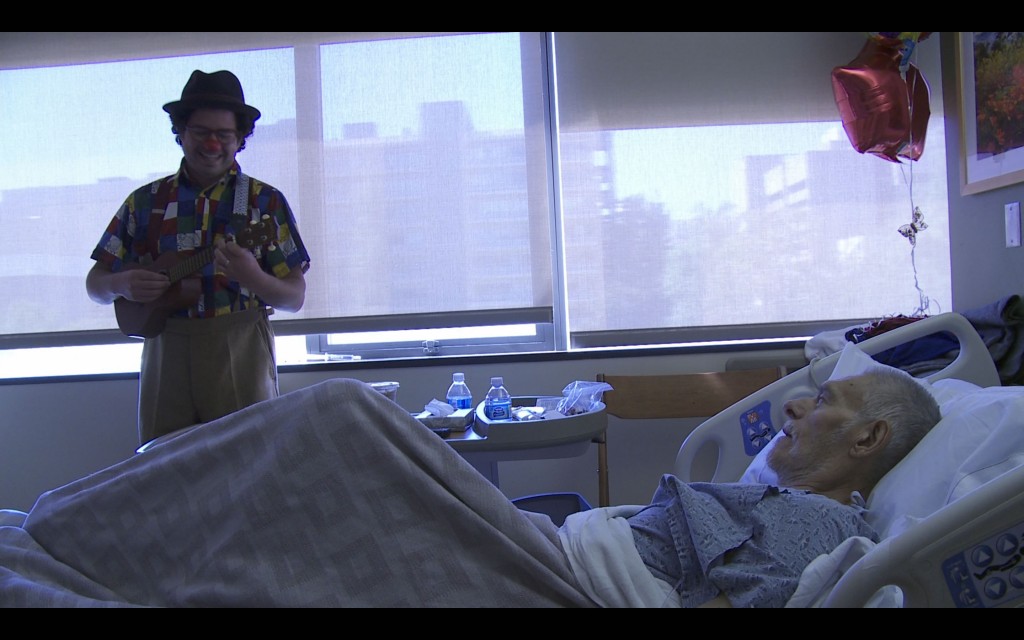 Adults don’t typically need the same type of playful diversion as children, but they enjoy the clown visits which often help break up the monotony and loneliness of an extended hospital stay. Steel and Conlin have listened as a patient regaled them with her interests in the Ducks hockey team and hockey players she had met. On other occasions, the clowns have been invited into the infusion center to dash off a chorus of “Happy Birthday.” Their visits to Norris Cancer Hospital have become regular enough that the patients anticipate their visits. During the holiday season, several of them sent holiday cards addressed to Lady Clown and Guy Clown.

The success of Steel and Conlin’s work has helped win over hospital staff members who were initially skeptical that clowning had any place in a medical environment outside of a pediatric setting.

“I have explained to hospital staff that this is performance that is conjuring up laugher, creating humor in a setting that is otherwise pretty serious,” said Kaitlin Alderete, director of patient and family experience at USC Norris Cancer Hospital. “I think the intent of creating laughter and putting a smile on someone’s face is something to be commended.”

The Medical Clowning program has been made possible through new grants and donations, with lead funding from Edit & Edward Komberg, the Joshua & Siobhan Korman Philanthropic Fund and the Albert & Bessie Warner Fund. If you are interested in making a donation to support this work, please contact Sara Fousekis, assistant dean of development, at fousekis@usc.edu or by phone at 213-821-4047.