The UCLA William Andrews Clark Memorial Library’s new Arts on the Ground festival kicks off on June 29-30 as a family affair for the School of Dramatic Arts. The summer-long program will begin with the Golden Tongues reading series, presented by the Playwrights’ Arena, which features adaptations and classical works of three SDA faculty. It will be the first of the event’s L.A. Escena series, designed to introduce audiences to the treasures of the Hispanic theatre tradition through bilingual staged readings from Spain’s Golden Age. 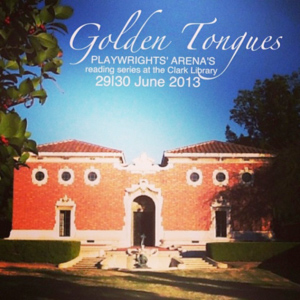 The event will take place at the gardens at the UCLA William Andrews Clark Memorial Library, 2520 Cimarron St. in Los Angeles. To purchase tickets to the event, visit goldentongues.brownpapertickets.com or call 800.838.3006.

Besides Don Quixote, Cervantes wrote several plays and comic interludes (1615) on urban themes, often flipping the script to challenge social norms of the times. In a decidedly American update, Mayer connects two of the plays to the TV/film industry, from the Tarantino-esque blaxploitation of pimps and whores to a divorce court worthy of Judge Judy.

Cause Célèbre is a contemporary play inspired by Ana Caro’s Valor, agravio y mujer (1630s) a tale of a woman who dresses as a man and restores her own honor. In this modern adaptation, a megastar gives herself to an ardent suitor who deserts her. Disguised as a man, she pursues him to seek revenge only to find that love breeds a unique notoriety from which no one is immune.

Painting in Red by Luis Alfaro

Painting in Red is a riff on Calderón’s The Painter Of His Own Dishonour (1640s) in which a painter struggles with his own personal desires, including a hasty marriage, only to discover that his wife’s former lover has returned and reignited passions in both artist and muse that will end in disaster.