As the veteran assistant dean of admissions and student services for USC’s School of Dramatic Arts since 2000, Lori Ray Fisher has played a significant, and widely appreciated, role in the lives of students, parents, and faculty. In July, Fisher’s appointment as the School’s first-ever vice dean will allow her to further broaden her scope.

Fisher, Dean David Bridel says, “is a patient and astute communicator, a problem-solver, and a leader” with “a portfolio of skills and abilities that made it obvious to me, quite soon after I started working with her, that she would respond to a position of greater responsibility.”

As vice dean, Fisher will be a day-to-day operational manager for SDA’s “vastly expanded network of activities,” Bridel says, pointing to the development of a new BFA in contemporary musical theatre and additional new programming at the degree level, as well as the School’s enhanced professional development and summer programming, and other curriculum-related activities and operations.

“She’s also just an absolutely lovely person, which doesn’t do any harm.”

Shane McGhie, who graduated in 2016 from the School of Dramatic Arts with a BFA in Acting, is one of many students grateful for Fisher’s guidance. “She took the time to listen to what the students had to say,” McGhie says. “She said, ‘I’m here, use me, talk to me if you need me.’ She was like a mom away from mom. And I love her smile,” he adds. “It can definitely make any rough situation feel a little more hopeful.” 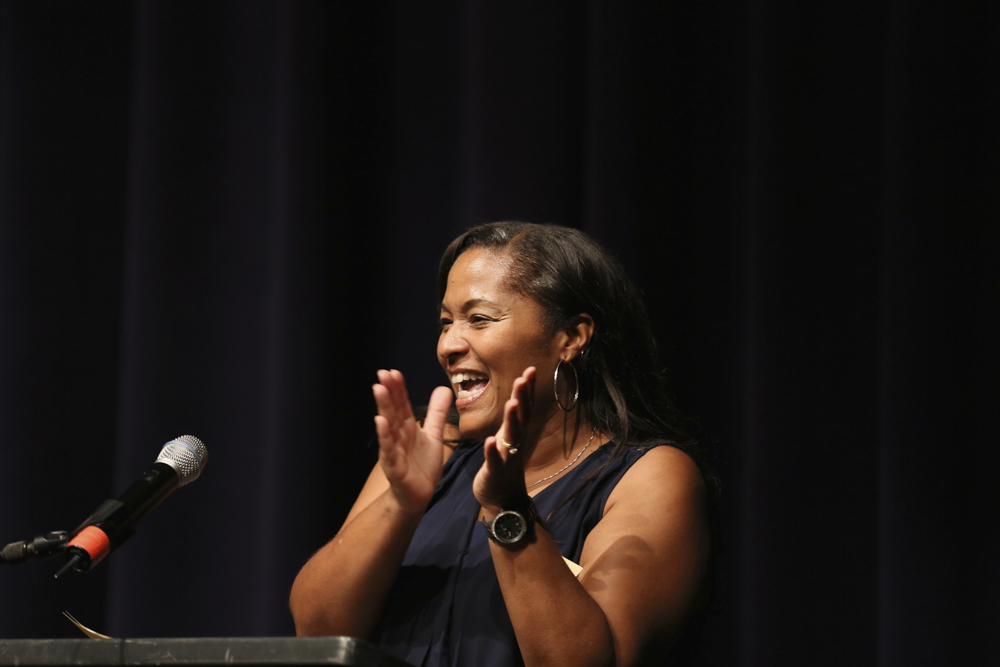 Fisher says that she is honored to be thought of “as someone who would be able to provide support in such a vital role” at this point in the School of Dramatic Arts’ evolution. “I think that now we’re at a point where we have a sound curricular structure,” she says, “we have an excellent faculty that brings tremendous value both nationally and internationally, [and] I know that we’re going to reach the position of the best performing arts school in the country. We’re on our way there.”

Her biggest challenge as vice dean, Fisher says, will be easing out of her role in supporting students directly, but she looks forward to working closely with faculty to create an organizational structure that will help support students. “My day-to-day interaction with the students is going to be minimized,” she notes, “but overall I’m still working for that good.”

Fisher’s empathy for the challenges students face is rooted in something she experienced at age 18 as a struggling electrical engineering major at the university.

“Back in the ’80s, USC was a very different campus,” she says. “I was a first generation college student, a student of color, a woman and an inner city kid [from Compton, Calif.] on top of that. And I had an advisor who essentially said, ‘Why are you here? You should just go home now and save all of us time, because you’re not going to finish.’ ”

Shaken, Fisher managed to survive that rocky start by making connections with other students of color and with much more supportive student affairs professionals. She eventually switched majors, earning an undergraduate degree from the Annenberg School of Communication & Journalism, and an MA from the Rossier School of Education. But the memory of her early negative experience stuck, she said, and she was determined to be a strong, confidence-building resource for students when, after earning her BA, Fisher joined the USC staff as a career counselor.

Her nearly 30 years with USC encompass positions in the psychology department (as an academic advisor), a return to the university’s career center — where she established programming for diversity and outreach through internships and alumni partnerships — and extensive sojourns within the School of Dramatic Arts, first as a director, and then as assistant dean.

“One stepping stone led to another, and then another,” Fisher says, “but each was in the service of empowering young people, saying ‘you can do this, you can connect, you can network, don’t give up and, yes, it’s going to be tough, but you can continue on.’ ”

The part that USC has played in Fisher’s life extends to her family as well. She and her husband, now “empty nesters,” have two daughters. One will be a sophomore at USC’s Marshall School of Business; the other, a law student at the University of La Verne, is a USC alum.

Story appeared in the 2017-18 Callboard magazine.