Mid-March, with just a few weeks until opening, the cast of Fuente Ovejuna: A Disloyal Adaptation had just a couple of loose ends to tie up before tech rehearsals. When COVID-19 precautions began to change by the minute, they left campus with details up in the air. Nobody was quite sure what would become of their process. When director Rena Heinrich received news of the season cancellation, she resolved to tie up the loose ends performance or not; after all, the play deals a lot with endings.

Heinrich, who is also an Assistant Professor of Theatre Practice in Critical Studies, observed her colleagues’ reactions and wanted to provide the same sense of closure to her students.

“I think the faculty and staff processed the cancellation and then realized that the production was a class – and that classes were still going – and we recalibrated our thinking. I realized that perhaps my cast hadn’t quite done that. I wanted to work through the pieces that were eluding us,” she said.

Exploring in a virtual workspace

Heinrich modified rehearsal schedules with her cast and planned for online convening. The cast had two scenes left in the script that would complete the show in the third act, a coincidence considering that the character Laurencia essentially asks, “can we get to act three?” for the duration of the show. They would read together until the script was complete, even if just for their own peace of mind.

“It’s funny how the play really imitates life in this case,” said Heinrich. “We had to finish act three, for Laurencia.”

Laurencia (played by Alejandra Villanueva) and the rest of the cast had also been working on movement with choreographer Tiana Alvarez, and Heinrich resolved that they would fine-tune the choreography in one more online rehearsal. They gathered virtually to complete the number from the comfort of their own homes.

At the beginning of rehearsals, Heinrich had asked that the cast keep a journal and scribble an entry on one of their physical rehearsals, either with Alvarez or with fight choreographer Edgar Landa. She remembered finding little gems in the journaling process during previous shows, and prompted her students to pick a personal theme for their notes. The theme would act as a lens with which to frame their experience and their growth. Now, the journal exercise is more crucial than ever—it gives the actors a chance to make note of the limitations in the process, but also allows them a chance at reflection when the buzz of university life has calmed down.

“I’m asking them to look at moments in the play or aspects of their character that they were working on or figuring out to fine-tune or explore,” she said.” I’ve found that really illuminating in terms of setting the personal theme, and how that changes the lens in which you’re looking at something.” 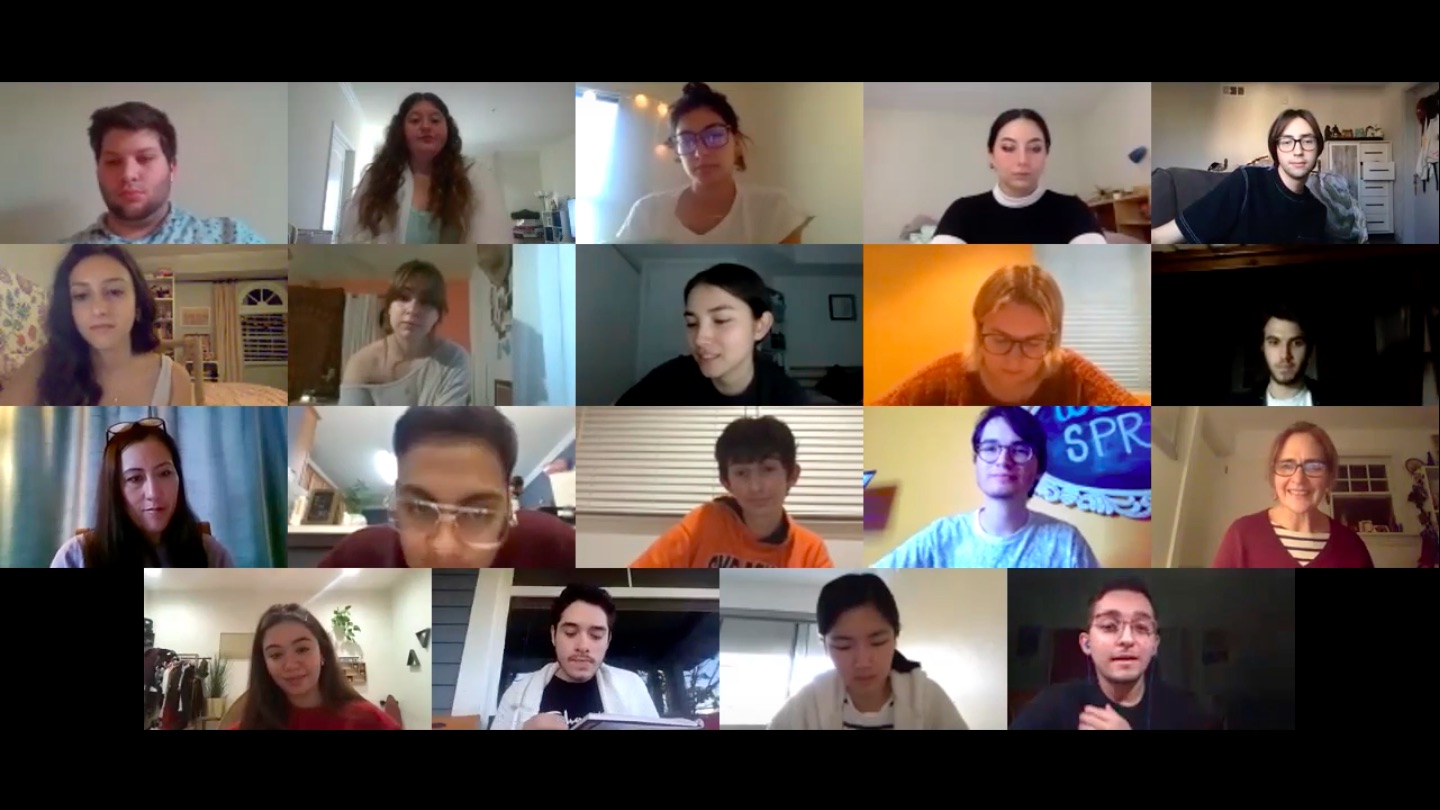 The cast of Fuente Ovejuna: A Disloyal Adaptation on Zoom with playwright Cusi Cram and director Rena Heinrich.

The work the cast had put into their internal reflection throughout the process showed when it came time to chat virtually with playwright Cusi Cram. Originally, Cram had planned to watch one of the cast’s final rehearsals over Skype before the production went up. When the session moved to a digital platform, Heinrich decided to shift to a discussion instead, since technical elements would be unavailable from a Zoom perspective.

Cram joined an evening rehearsal and explained that her attachment to the narrative began when she read it during her undergraduate education, and why after reading Fuente Ovejuna she ended up adapting it years later.

“It had this amazing humor and incredible pathos, and really complicated message,” she told the cast. “I thought one day maybe I should adapt it since there wasn’t really a rich translation of it, and a friend at Princeton agreed and found a way for me to adapt it in residency there.”

After workshopping the play on a few different university casts, Cram was able to travel to Spain last summer, where she spent time with the draft and redrafted just before sending the current version to Heinrich, which is what the cast has been reading.

Many of the actors had questions about their characters’ motivations, and why Cram added, changed, or even gender-swapped their characters from the original play to create her adaptation. Cram had individual answers for each, but repeatedly returned to the idea that these new-and-improved characters were reflections of those she had encountered in her time as a playwright, director, and actor.

“I started to think about the ensemble as a troupe, asking myself what the tropes of an acting company were. The characters kind of just took over,” she explained.

Giovanny Camarena, who played the role of Frondoso, asked if Cram had experienced any roadblocks in adapting the play. Her response was serendipitously appropriate for the situation at hand: the play has a strange denoument, and the characters’ return after a lot of suffering is hard to understand, hard to reconcile.

“That part has always been a little hard for me—when they come back again, what does that mean? I’ve thought a lot about how it should end, when it should end, and how you wrap up those realities,” she said.

It seemed the cast had wondered the same things.

“One of the biggest things I was struggling with was trusting and accepting the people of Fuente Ovejuna again,” said Villanueva. “I don’t know how we were supposed to come back after all of this. Would Laurencia be able to return to trusting people after what happened?” she asked Cram.

Cram explained that she sees the end of the work as exploring how the balance of justice can be restored.

Though they may not have made it to the Scene Dock Theatre, the cast had the support of a crew who had worked to make the play come alive. Costume and set designers were able to see some of their work come to fruition, even if incomplete.

“Our set was loaded in and partially finished on the day of the season cancellation. We have some pictures of it, and it’s beautiful—I’m so happy with it,” said Heinrich.

For this cast and crew, a bittersweet ending mimics the finish of the show itself. But Heinrich is confident that the cast will meet again someday, and won’t have to reach far to bring their characters back to life.

“Seeing that and knowing we were that close is very bittersweet, but also kind of exciting,” she said. “It all happened, and I can see the plans coming to fruition.”