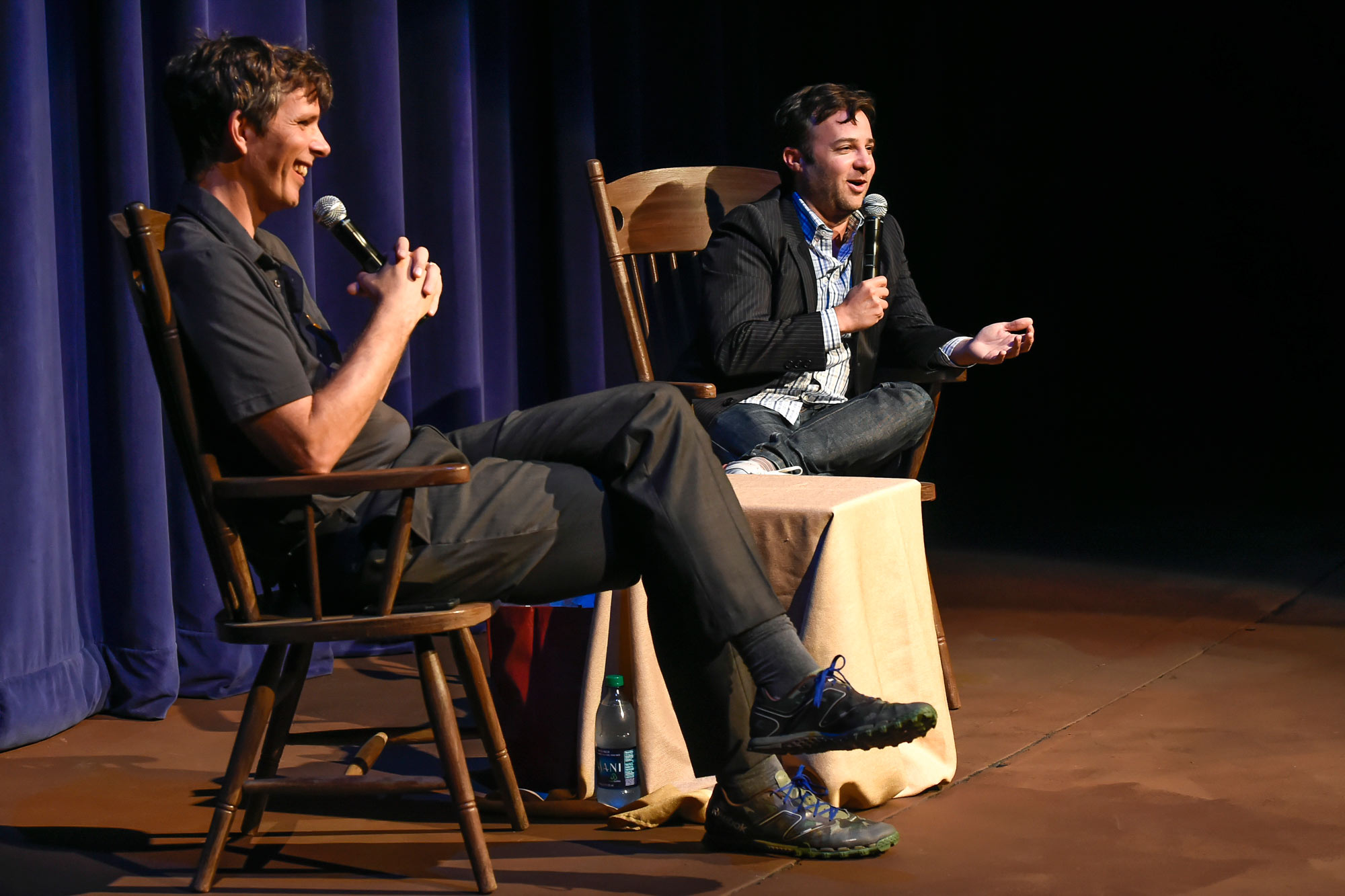 The applause started even before he was introduced.

When Danny Strong (BA ’96) merely stepped on the stage of the Bing Theatre on Sept. 29, the 150 students in the audience broke into cheers.

The USC School of Dramatic Arts graduate is the co-creator and an executive producer, director and writer of the sizzling hot television show Empire. But the cheers also could have been an acknowledgment of Strong’s highly unusual superfecta — his success as a writer in both television and film, as an actor in both mediums, and as a producer and director. He’s won two Emmy awards, two Writers Guild of America awards, a Producers Guild of America Award and a Golden Globe.

Speaking in a conversation with Interim Dean David Bridel, Strong inaugurated the School’s new Spotlight@SDA series in which notable entertainment figures come to campus to speak to students.

Strong spoke fondly of his time at USC, noting that he appeared at the Bing several times, in Two Gentlemen of Verona, The Caucasian Chalk Circle and “as the toughest Jet on the stage” in West Side Story.

When the conversation ended to accommodate a play rehearsal, Strong generously continued answering eager students’ questions in the lobby for an additional 30 minutes.

Success in the entertainment business takes “persistence and resilience,” he told the students, who were evenly divided between dramatic arts and cinematic arts majors. “The number of times I was passed on as a writer by an agent was staggering,” Strong said.

“I was working as an actor one and a half years after I graduated,” he acknowledged. “But I was auditioning since I was 17. So that was six-and-a-half years of auditioning.” 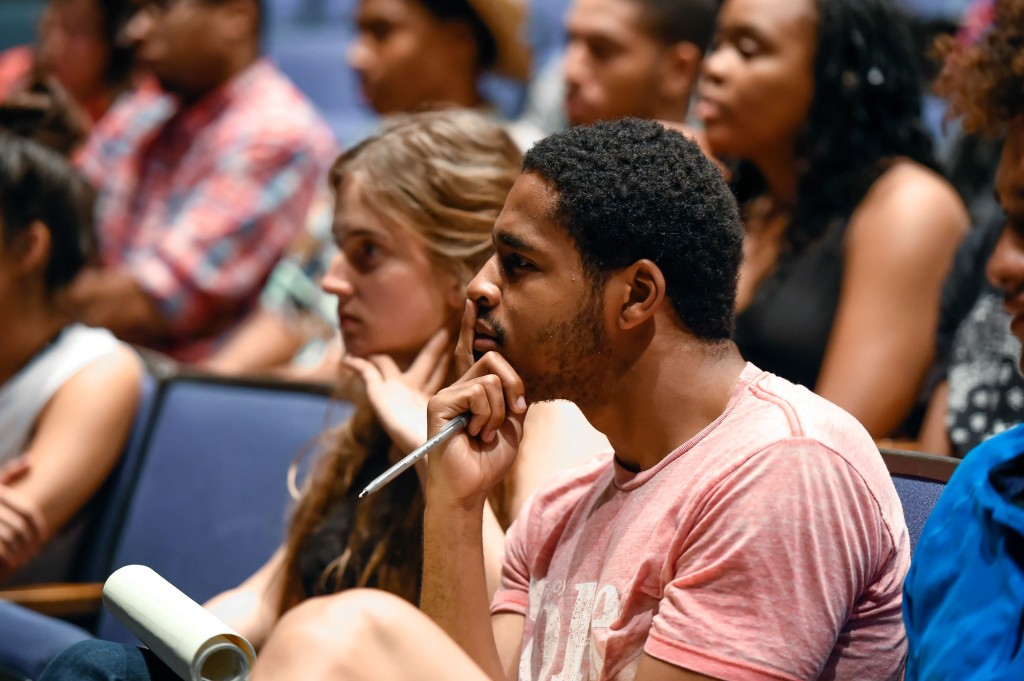 His breakthrough came the day he was planning to quit. He had always prepared for auditions by trying to figure out exactly what the producers were looking for and tailoring his line readings accordingly. But, having made the decision to quit, he approached his final audition fearlessly and did a no-holds-barred character similar to Kramer from Seinfeld. He landed the role, and also succeeded at his next two auditions, booking three guest star spots in one week.

Strong discovered that the same adjustment was necessary to advance as a writer.

He began writing spec scripts when he was 25, turning out broad Jim Carrey-type comedies. After six years, “I looked at all my scripts on the shelf and realized I had been writing movies I would never go to see,” admitted Strong. “I was thinking of what the industry wanted to see.”

He decided to write about a subject that truly interested him — the Florida recount that took place after the 2000 presidential election. It was a topic that only HBO might be interested in. HBO was a lofty goal for an unproduced screenwriter, but the cable network did buy his concept — and his script — and Recount aired with a cast that included Kevin Spacey, Laura Dern and Tom Wilkinson. Strong was nominated for an Emmy Award, won a Writers Guild Award and the film won an Emmy for outstanding movie made for television.

The recount was a controversial, crazy chapter in American history, Strong said. “I literally cold-called people” to interview them for the project. By that time, I had a really encyclopedic knowledge of the Florida recount, and Republicans (and others) really opened up to me because I simply said, ‘tell me your story.’”

He went on to write another HBO project, Game Change, a Peabody Award-winning film about Sarah Palin that starred Julianne Moore. He followed that with the huge box office hit Lee Daniels’ The Butler, starring Forest Whitaker and Oprah Winfrey.

“For a historical piece, read as much as you can,” he advised the students. “But then you have to construct it like a movie, with an Act One climax, an Act Two climax, etc. You are not trying to tell a history lesson or give a Wikipedia entry.”

Looking to the classics

Strong said that he looks to the classics for his themes. Game Change was Pygmalion, with Sarah Palin as Eliza Doolittle. Empire is King Lear, with children fighting over a family empire.

But there’s more to Empire. Its spine is a soap opera, but it also is a serious family drama that takes on social issues in a blunt way, he said. Layered on top is a hip-hop musical with a musical number every eight minutes and a killer ensemble cast. Fans — and actors — love it. 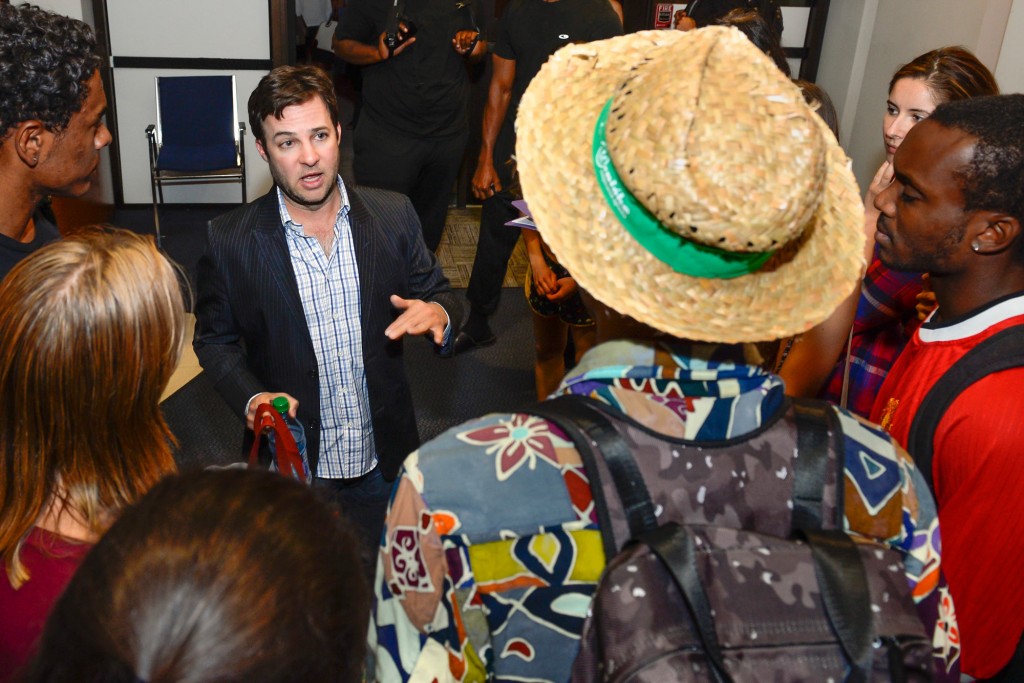 After the event, Strong meets with students to answer questions. (USC Photo/Gus Ruelas)

“Empire is huge for me,” Shaun Heard, a first-year MFA student from Pasadena, told Strong from the audience. “Thank you as a fan and as an actor of color.”

What’s next for Strong?

“There’s a misconception that because I’ve had success, I can do whatever I want,” he said. “In the entertainment business, you can never do whatever you want.”

That said, in addition to his Empire duties, he is working on multiple projects he’s excited about — the screenplay for a new film adaptation of Guys and Dolls, a movie about the young J.D. Salinger, and a rock musical for the stage about Galileo and his fight with the Catholic Church.

“I’m working on three to five projects at a time with writing and five as a producer,” he said. “So I have 10 projects going at any time.”

Strong said it makes sense not to put all your hopes on a single project. “For every four screenplays I write, one gets made. Instead of pining over your movie that’s not getting made, write something else.”

Writer’s block is not an option for Strong. “I show up every day to write, often in coffee shops because I like that white noise. I spend four to five hours a day seated somewhere,” he said. And if he can’t think of anything to write, he will “free write” – ideas, lists of 50 things he likes – anything to keep writing.

“Read as many books, see as many plays as possible while you are here at USC,” he told the students gathered in the lobby. “Build your knowledge here that you’re not going to get out there.”