Actor and director Michael Chiklis, who often plays tough guys, displayed more tender emotions Friday as the undergraduate Commencement speaker at the USC School of Dramatic Arts. The opportunity to speak to the crowd in the packed Bing Theatre and in overflow seating outside was an “overwhelming honor,” he said, because he was the proud father of one of the 117 graduating seniors sitting on the stage, his oldest daughter, Autumn.

So it was understandable that as he finished his thoughtful, warm and witty address, he got a little emotional. 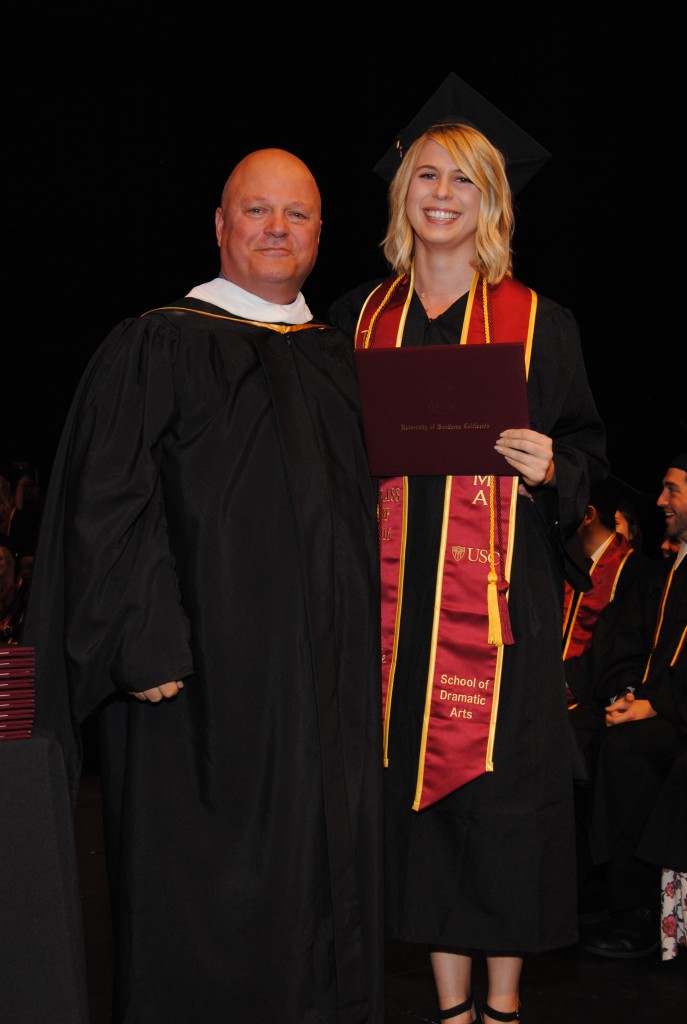 Chiklis, an accomplished stage, film and television actor who also has a musical career and a new album about to release, is perhaps best known for his Emmy Award-winning turn in the drama series The Shield. But he has also been a standout in The Commish, Fantastic Four, Vegas, American Horror Story and Gotham, among other productions.

He told the graduates that it was vitally important for them to find some equilibrium in a profession that has built-in instability. Even actors with big careers rarely feel as though they have “made it,” he said.

“Your grounding has to come from within,” he said. That’s important, because thanks to social media, criticism now can rain down from all quarters. Or, as he memorably put it, “Any human stain with a pair of thumbs can eviscerate you from a crushed velvet couch in a basement in Dubuque.”

He told the graduates they are stronger together than alone, and they should collaborate with their peers, “starting yesterday.”

Create your own projects, Chiklis advised, and if you can’t be a creator, be a facilitator. “Be a worker bee so they can’t imagine mounting a production without you,” he said.

He told the students to own their own mistakes and move on. “Don’t blame others,” he cautioned. “Your ability to cope with failure and loss will greatly determine your ability to succeed.”

Try hard to avoid jealousy and desperation, Chiklis continued. The former “takes from you,” and the latter is repellant. “Always be hungry, never desperate.”

Aim high, he said, repeating the well-known phrase: “Shoot for the moon and if you miss, you will fall among the stars.”

And finally, as he passed along some advice from his father – “Be afraid and do it anyway” – Chiklis started choking up a bit.

He concluded: “All we really have in this life is each other.” And so, the most important thing in life is “love, lots of love.”

Chiklis was able to hand his daughter her diploma cover, one of three father-child presentations during the ceremony. Randolph Beatty, former dean of the USC Leaventhal School of Accounting and currently Accounting Circle Professor at the USC Marshall School of Business, made the presentation to his daughter, Alicia. And Dramatic Arts professor Phil Allen had the proud honor of handing the diploma cover to his son, Austin. 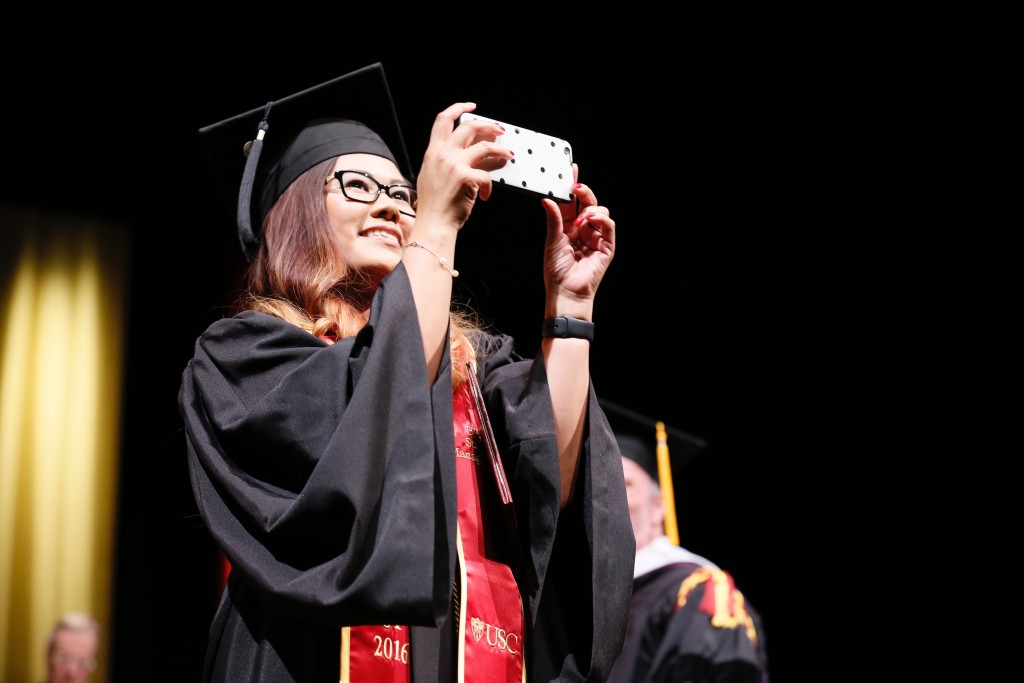 Austin Allen, a design program major, was one of two student speakers, representing the bachelor of fine arts graduates. Michael Sturgis, an acting major, spoke as the representative of the Bachelor of arts graduates.

Dean Bridel told the audience that the Commencement ceremony was a way of saying “thank you, well done and bon voyage” to the graduates, and said he has confidence that they are “ready to turn challenge into success, and success into triumph.”

Later in the day, the School held its first-ever MFA Commencement ceremony, also in the Bing Theatre, at which the graduates from the School’s MFA in acting and MFA in dramatic writing programs received their advanced degrees. Their speaker was Tony Taccone, the legendary artistic director of Berkeley Repertory Theatre. Under Taccone’s tenure, the Tony-winning nonprofit theatre has been a worldwide innovator, presenting more than 70 world, American, and West Coast premieres and sending 23 shows to New York, two to London, and one to Hong Kong. Prior to Berkeley Rep, Taccone was the artistic director of Eureka Theatre, where he commissioned Tony Kushner’s groundbreaking Angels in America. He has since collaborated with Kushner on eight plays at Berkeley Rep. 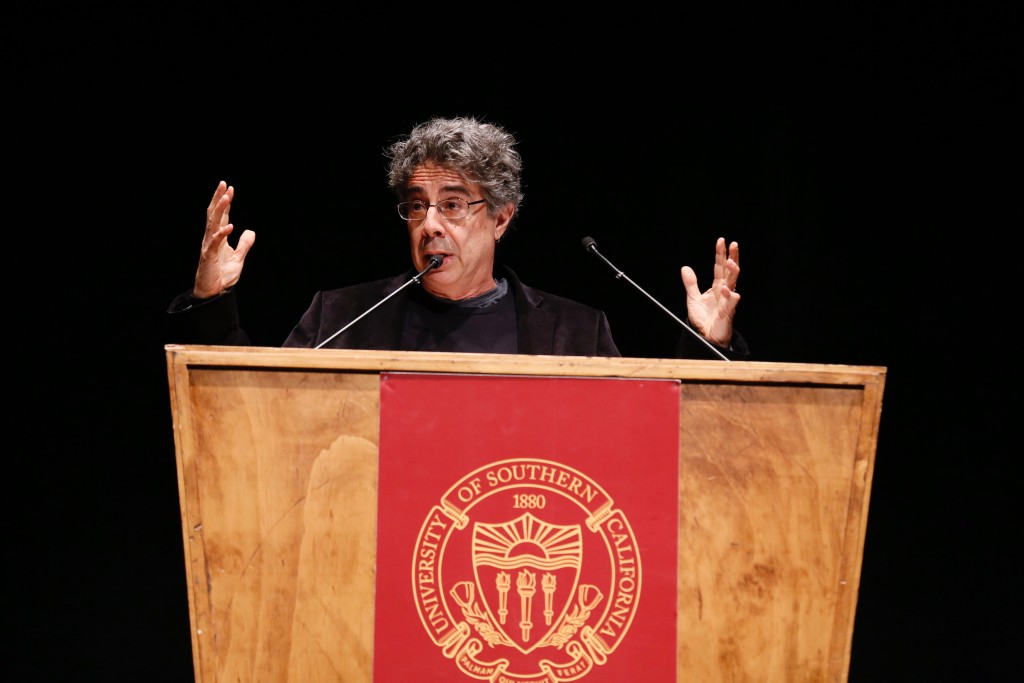 Taccone asked the audience a significant question: “Why be an artist?” His answer was that there is no higher calling. “There is no greater responsibility than holding a mirror to society,” he said. “The greatest opportunity to have is to create meaning,” he said.

“The goal of the artist and art is revelation,” he continued, and cautioned the graduates that they will need all of their “strength, rigor, clarity and transcendence of their goal” to focus on their art, rather than themselves.

Taccone, who is also an award-winning playwright, asked the students on the stage to take a good look at their colleagues. Although they will no longer be in classes together, he said that their fellow graduates are the community they will have in the future. “Nothing feels better than collaborative work,” he said.

The MFA graduates anticipated his advice, and decided to do a collaborative speech instead of electing one person to speak on the group’s behalf. Each delivered a short speech, sharing about their time at the School, their growth, the tight-knit nature of their cohort and what they gained from the program.

“There is power in this place, in these people and in me … I have seen what it means to stand tall,” summed up Kyla Lowder, an MFA in acting graduate.

Harena Alemayahu poses for the camera after receiving her diploma cover during the 2016 undergraduate commencement ceremony. Photo by Stacey Wang Rizzo/USC School of Dramatic Arts

Michael Chiklis and his daughter Autumn during the School of Dramatic Arts' undergraduate commencement. Photo by Grad Images.

A proud Geoffrey Katz walks the stage to receive his diploma cover during the 2016 undergraduate commencement ceremony. Photo by Stacey Wang Rizzo/USC School of Dramatic Arts

Family and friends cheer the graduating class on stage at the 2016 commencement ceremony. Photo by Stacey Wang Rizzo/USC School of Dramatic Arts