In the wake of the #OscarsSoWhite and #TimesUp movements, the performing arts are looking inward and confronting a sometimes troubled history. The lasting legacy of these hashtags will be going beyond tough conversations and establishing real and continued change in diversity and inclusion.

At USC’s School of Dramatic Arts, the tough public conversations began several years ago, most notably with a three-day summit in 2015 on issues of race, gender, culture and identity within the entertainment industry and academia. At its close, then interim Dean David Bridel announced the re-establishment of the School’s diversity committee, renaming it the Inclusion and Equity Committee, made up of faculty, staff, students and alumni. Bridel said he was committed to “cultivating a culture in which plural opinions and plural representations are equally heard and equally upheld.”

Since then, SDA’s work on equity, diversity and inclusion has been continual and far-reaching.

A second diversity summit was held during the 2016-17 academic year. A strategic plan with specific recommendations for diversity and inclusion for the School was unveiled in 2017. That year, another public commitment came when Dean Bridel elevated Associate Professor of Theatre Practice Anita Dashiell-Sparks, who had been the School’s diversity liaison director, to associate dean of equity, diversity and inclusion – the first such associate dean level appointment at USC. Since then, four other USC schools have followed suit.

“Academic theatre has the opportunity to lead in diversity and inclusion, so let’s do that,” said Dashiell-Sparks. “Let’s leverage our privilege and our opportunity to prepare the next generation of artists. I fervently believe we can influence and change arts education in the 21st Century.”

On the School level, in 2017, the Inclusion and Equity Committee rolled out a detailed survey to gauge the current cultural climate at the School. It was sent to all SDA students, staff and faculty, and there was an excellent response rate. The results, Dashiell-Sparks said, were illuminating. The committee learned about the different ways that students and faculty of color felt invisible, she said, their desires for a more diverse faculty, and how students believe that gender and gender identity can affect scene assignments in class. Students also commented on economic disparity and described how working while in school negatively affected their academic performance.

A guide was created to hand out at company meetings, the large gatherings of all actors and behind-the-scenes creatives involved in every production taking place in a particular semester. The guides have been handed out for the past three semesters and are also given to outside directors hired to helm SDA productions. The guide includes key terminology and definitions for diversity and inclusion issues, intimacy guidelines for setting up clear boundaries and a culture of consent for sensitive scenes, and suggestions on how to discuss and deal thoughtfully with issues of gender identities, religion, race and ethnicity. 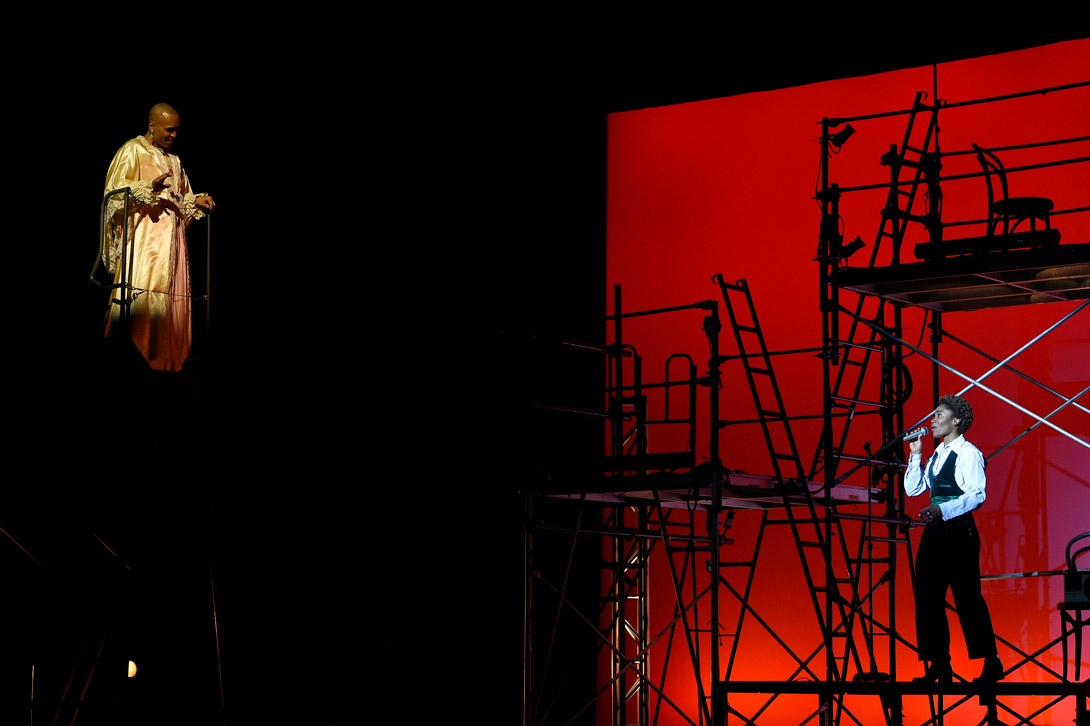 Gender roles are reversed in this year’s production of The Two Gentlemen of Verona. Austen Parros performs as Silvia and Nona Johnson as Proteus. (Photo by Craig Schwartz)

Then, in Spring 2018, the School officially launched its Institute for Theatre and Social Change (ITSC) and held a four-day conference. People of all backgrounds came together to explore how the arts can empower communities that need their voices heard. The ITSC, led by Associate Professor of Theatre Practice Brent Blair, shares a name with an upcoming new undergraduate minor.

At its founding, Blair described how the ITSC – and the classes supporting its mission – use theatre to help oppressed communities find solutions to difficult problems.

“People get emotionally affected by watching a really good play, but then maybe they go home and the next day or two they forget,” he said. “But when people become engaged and have to participate in the process, they are much more likely to then continue their engagement long after the play is gone. That’s the basic underlying ethical principle of the new Theatre and Social Change focus, which is to engage people in art to let them make their own revolution.”

Last December, for example, the ITSC partnered with the Natural History Museum of Los Angeles for a combined curated exhibit “Los Angeles: Coming Home.” This theatrical collaboration inspired conversation around the theme of being and living in Los Angeles through the staging of three short community-based interactive plays.

Diversity and inclusion projects in the works at SDA for the future include an upcoming training for all six art schools at USC, training about implicit bias for all faculty and staff, and creation of an equity, diversity and inclusion checklist specifically for arts education. “The time is ripe and the need is urgent,” said Dashiell-Sparks.

And SDA is taking steps toward becoming a national leader in equity. Dashiell-Sparks received a grant from USC Provost Michael Quick’s office last year to create an intercultural competency leadership certificate. This could be a professional development certificate for current teachers or a certificate given to undergraduate and graduate theatre majors who could then use their equity, diversity and inclusion training in nonprofit or business settings.

Dashiell-Sparks has traveled to Brazil and Hawaii doing research for the certificate and will be going to Africa this year. She said that academia is the ideal place for leadership in equity and civic engagement issues because true academic discourse requires welcoming different perspectives and beliefs.

Meanwhile, the work on equity and inclusion being done now in SDA classrooms will have lasting effects on the future of the field, Dashiell-Sparks said. As students graduate and become leaders in the industry, Oscar night and other award ceremonies will better reflect the diversity that students here are learning to pursue and honor.