When your office is above the stage of a working theatre, a pattern of sounds becomes a familiar soundtrack. I do the work of production management for the USC School of Dramatic Arts’ many plays and musicals, and my office is in the upstairs workroom of the Scene Dock Theatre at the southwest edge of campus. There, I share space with the School’s property manager, Hannah Burnham, along with her workstudy students. During Fall and Spring semesters, the workroom is abuzz with students building props, sewing soft goods, and researching purchases for productions.

Burnham and I became accustomed to the sequence of sounds from the theatre wafting up through the floor. In the midst of productions, there is this progression: first, scenery being loaded in, then a silent week while sets are painted, followed by sound checks, then music playing while lights are focused, and ultimately, the pre-show voice and body warmups of students. In January and February, we listened to the guttural and gusty physicality of the MFA Repertory students preparing for their shows. In May, we listened to fragments of the dramatic personal stories of the solo performers.

But in the days prior to May 6 senior portfolio review for the graduating BFA Design students, the downstairs theatre hummed with an abbreviated cycle of sounds: a small light hang, followed by the installation of seven vertical-hanging 4’x8’ homasote panels usually covered with fabric and used to display photos of their accumulated work at USC SDA. By Wednesday, the seniors were chomping at the bit, waiting for the delivery of 8-foot tables so they could begin to create their elaborate portfolio displays.

The senior portfolio review is a capstone event for the students to showcase their designs, and receive feedback from faculty, alumni and industry guests.

The graduating class of designers has an impressive roster of USC plays under their belts. Megan Guthrie-Wedemeyer, for example, racked up seven theatrical credits, six as costume designer and one as scenic designer, garnering a James A. Doolittle Award at an awards banquet later in the evening. In addition, she managed to act as the costume designer for five short films, two music videos and a commercial while a full-time student. 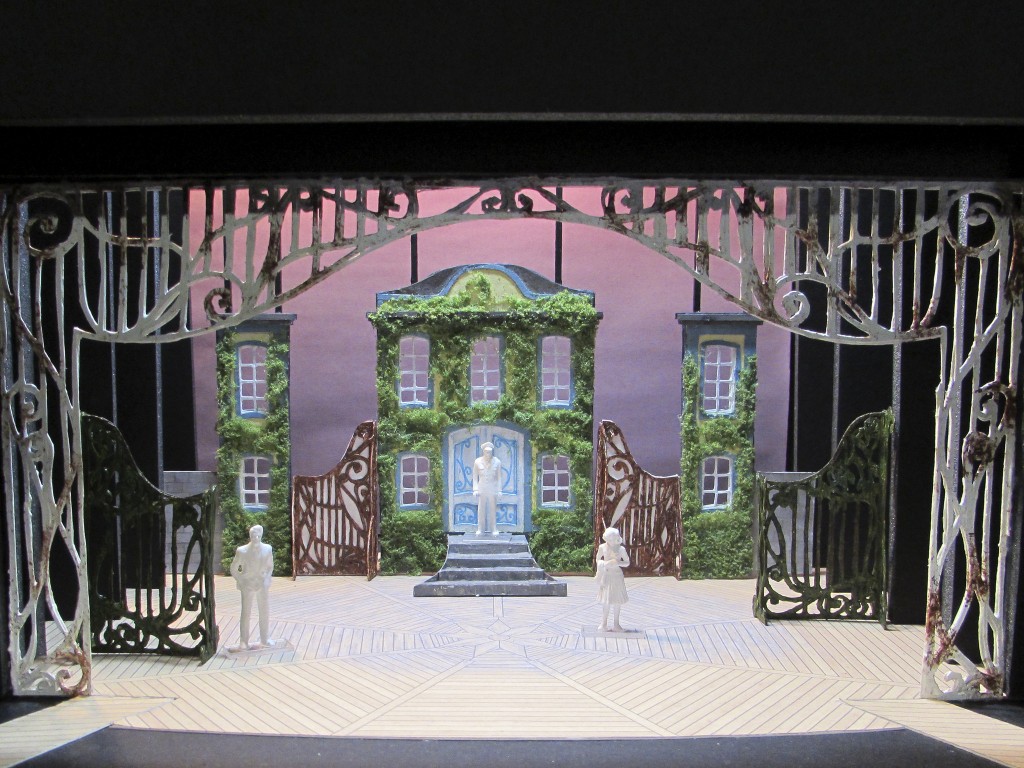 Lea Branyan, a scenic designer, was on a tight schedule, planning to leave that night to drive to Spring Green, Wisconsin, where a summer scenic internship awaited her at the American Players Theatre. Her portfolio table featured a peep show of three of her six scenic designs and a class model project, all achieved in only three years (she had begun in the stage manager sequence as a freshman). Branyan’s design of A Little Night Music this spring was an elegant assemblage of delicately shaped metal gates and a huge proscenium arch similarly constructed of metal. The manor house, dressed with greenery, took center stage in her detailed model.

Student designer G. Austin Allen effectively demonstrated his integration of projections, scenery and lighting design in Love and Information by Caryl Churchill last fall in the McClintock Theatre. Allen’s model, coupled with a mini-projector, recreated the dynamic opening tableau of this production. 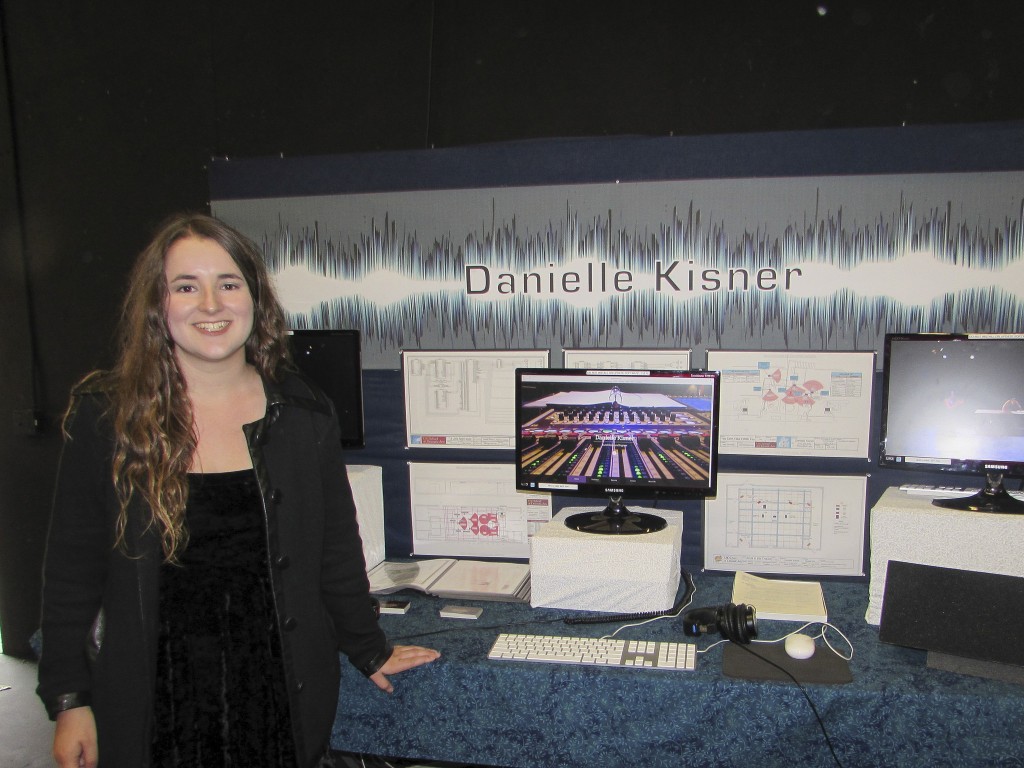 Danielle Kisner had an impressive display with a monitor, where one could listen to the sounds generated on some of her 18 sound designs, including A Little Night Music, and all three shows in the MFA Repertory; both were first time achievements by a student designer. The sounds from her monitor were effectively enhanced with photos and descriptive text about each production.

For more than two hours, the production and design faculty, along with guest lighting designer Jared Sayeg, costume designers Candice Cain, Antoinette Muto and Victoria Little, reviewed the students’ work, making comments and listening to them present their work. Each of the reviewers made a point of saying how well-prepared and articulate each of the students was about his/her work. 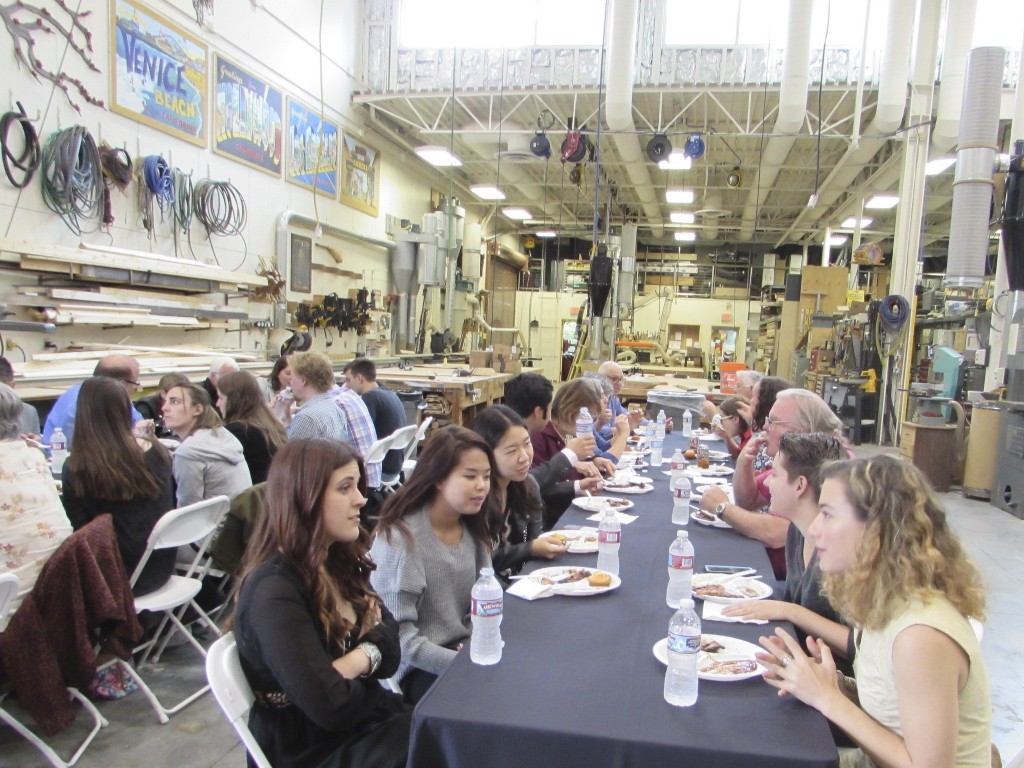 Then it was time for lunch; much laughter and goodwill spilled out of the Scene Dock and into the Technical Theatre Lab, where two long family-style tables were assembled amid equipment, and the students brushed elbows with former directors of their shows, as well as faculty, staff and participants from the stage management panel, joined by the newly arrived alumni panelists: Katrina Coulourides, ‘06, Trevor Burk, ‘05, Jennifer Brienen ’06, Sara Fox and Brittany MacWhorter ’10.

After lunch, all returned to the theatre, where the panelists, moderated by Coulourides, highlighted the many different roads they have taken since graduation. Trevor Burk said he rarely does theatre any more, but carries the foundation of storytelling that he got from USC with him 200 days a year traveling for “Visual Noise Creative,” his entertainment design company that does work for rock musicians, feature films and the fashion industry, among others.

He wasn’t the only one reporting opportunities around the globe. MacWhorter told of recently landing a job in China as an art director/design consultant on a Chinese version of the show The Voice.

All enthusiastically shared their failures as well as the perks of their work. Brienen described the thrill of taking the Geffen production of Thurgood to the Kennedy Center in Washington, D.C., the excitement of having the Obamas attend the show, Secret Service included. Coulourides described the mayhem of working for an MTV Spring Break show shot in Cancun, Mexico, and the difficulty of doing a month-long period of load-ins surrounded by drunk 20-year-olds.

All of them touted the benefits of persistence in finding and keeping work and building networks, graciously extending a hand up to current students. Fox described working at Western Costume, where she met many designers, and didn’t hesitate to chat them up for work.

Each discussed the difficulties of breaking into entertainment unions and the importance of continuing skills acquisition. “You have to have the chops – be a Swiss Army Knife,” advised Burk. To keep current, the alumni advocated reading – blogs, books, newspapers.

Another tip: Always be prepared to put a positive spin on any negative experiences you have in an interview situation, because prospective employers will beeline to any problematic people on your resumes.

There was time at the end of their discussion for questions from the students, and much mingling after the panel concluded.

Late in the afternoon,the space and displays remained open for public viewing of the portfolios. The din in the room was thrilling.

As the students, faculty and staff left the theatre to go to the awards banquet that evening, the familiar sounds of a production ending — tables being folded and equipment being rolled up the stairs — wafted up to our production office.