The third-year MFA Acting students are getting a rare opportunity during this spring’s repertory experience. They are premiering a play commissioned by the USC School of Dramatic Arts that was created specifically with the class’ nine actors in mind.

The play, Guarded, was written by Boni B. Alvarez, a faculty member at SDA who knows the actors — and their skills and strengths — personally, having taught them in a text analysis class during their first year in the program.

“I’d never written for a specific ensemble of actors, so it does have those challenges,” Alvarez said. “You want to give everybody their moments, but it is also an ensemble piece, so it needs to operate in that way, too. I think they’re pretty happy with the play that’s resulted from this process. It shows them all off well.”

Guarded is directed by Associate Professor David Warshofsky, who heads the MFA Acting program and suggested the commission for Alvarez. Performances of Guarded rotate this spring with the two other plays in repertory: Shakespeare’s A Midsummer Night’s Dream and Father Comes Home From the Wars (Parts 1, 2 & 3) by Suzan-Lori Parks.

On set in Los Angeles

Guarded takes place on the location of a Hollywood movie set. Alvarez, who began as an actor before becoming a playwright and who still acts, drew on his personal observations of a movie set being a place where many different worlds and backgrounds converge. “Something I’ve observed being on a Los Angeles set is that it takes a lot of very different people to make the industry work,” he said. 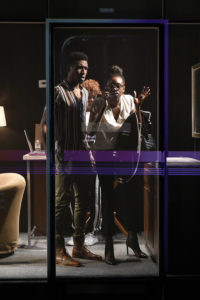 “Every person on the project is integral to the success of the project.”

Guarded explores how one person’s actions can throw everything off-course. The title came from the first two characters Alvarez wrote — security guards keeping watch over the production trailers at night. He then dreamed up a craft services person, actors, makeup artists and others. He started writing the play in summer 2019, and has been revising and rewriting up through rehearsals.

“It’s kind of great because part of the collaboration is to give the students that ‘working on a new play’ experience,” Alvarez said. Adapting to last-minute changes is part of the learning experience for them, he said.

Or, as Warshofsky wrote in his director’s note in the program: “It is somewhat mad to think one can workshop a brand-new play in the template of a three-play repertory, but that is exactly what we did and what we stand for. Never miss an opportunity to create regardless of the perceived constraints.”

Alvarez, who graduated in the first cohort of the MFA Dramatic Writing program in 2007, is a busy playwright, having had eight of his plays produced in the past decade. He is the son of Filipino immigrants, and his first name (pronounced Bone-y, not Bonnie) is an homage to his Filipino heritage. It was chosen because he was born on Nov. 30, Bonifacio Day, a national holiday in the Philippines that honors Andrés Bonifacio, the leader of an anti-colonial organization that set off the Philippine Revolution of 1896. 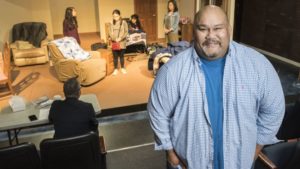 Playwright Boni B. Alvarez at the Skylight Theatre, where his play “America Adjacent” was introduced. (Nick Agro / For The Times)

Many of his plays examine the Filipino-American landscape. Guarded does not, which the playwright said was fine, as it allowed him to reach outside his normal palette of characters.

His three other projects-in-the-works have Filipino themes: Emmylu, about the Filipina girlfriend of the 2017 Las Vegas mass shooter, is slated for a fall production by Los Angeles’s Skylight Theatre Company; Refuge for a Purple Heart, about European Jews who were sheltered in the Philippines during World War II, is currently being read by theatres; and an untitled play about 1,000 Filipinos who were brought in for an exhibit at the 1904 World’s Fair in St. Louis is going to “be worked on more actively this year,” the playwright said.

From student to teacher

The impact of the MFA in Dramatic Writing program at SDA was a profound one on his career. “It definitely gave me deadlines, and a concentrated amount of time to really focus and get a taste of what it might be like to be a working writer,” he said.

“Having to work on a lot of different projects in a three-year period, sometimes you aren’t always inspired so you have to build on your elements of craft. That is a big thing for me, the craft and the discipline you learn.”

His thesis play, Ruby, Tragically Rotund, received a production at Playwright’s Arena in downtown Los Angeles shortly after he graduated, after one of his SDA professors, playwright Oliver Mayer, introduced Alvarez and his work to Playwright’s Arena’s artistic director Jon Lawrence Rivera. Rivera directed Ruby, Tragically Rotund, and has gone on to direct several other Alvarez plays.

Mayer said: “I have always been drawn to Boni’s outsized talent, passion, humor and sense of the dramatic. As an MFA dramatic writing student, he was legendary, writing a really high quantity of plays without sacrificing quality, and using forms like tragedy to tell contemporary stories of urban color.

“As a professional playwright, his success and continued output bathes USC in glory. I’ve never taught a better writer.”