Hard to believe, but true. Despite their shared interests, there had never been an official mixer between students at the USC School for Dramatic Arts and the USC School for Cinematic Arts. That omission was remedied the first evening of this semester when interim Dramatic Arts dean David Bridel welcomed students from both schools to a Spotlight@SDA program at the Bing Theatre featuring actor Tony Shalhoub who, appropriately, moves easily between stage and screen. Bridel started by giving a shout out to his collaborators on the event, the three School of Cinematic Arts professors who run Comedy@SCA: Jack Epps, David Isaacs and Barnet Kellman.

Kellman, a triple threat director himself in television, film and stage, interviewed Shalhoub before the large, engaged audience. Afterwards, the stage was filled with food, drink, sofas – and students from the two disciplines mixing it up.

Spotlight@SDA is a series of events sponsored by the School of Dramatic Arts to bring industry figures from stage and screen to campus for interviews, master classes and other interactions. In addition to Shalhoub, in the first three weeks of this semester, the School has welcomed playwright, actor and director Dakin Matthews, actor Bryan Cranston and writer and show creator Vince Gilligan.

The two became friends when Shalhoub married actress Brooke Adams, whom Kellman directed in a film. Adams was in the audience Jan. 11, as was Dramatic Arts Professor of Theatre Practice Andrei Belgrader, who was Shalhoub’s mentor and professor when both were at the Yale School of Drama.

Shalhoub told the students that “some of the most difficult, maddening, frustrating, exhilarating and inspirational jobs I’ve had were experiences I had in the theater working with Andrei. He would draw out things we didn’t think we were capable of. Once we were able to trust him and trust ourselves, amazing and unforgettable things happened. It was terrifying, really terrifying. I remember how it was all about taking those kinds of risks. Those are the kinds of things I would encourage you to look for, to strive for.”

Another piece of advice Shalhoub passed on was that life in the entertainment industry is always one of ups and downs. “It always was a rollercoaster and it will always be a rollercoaster,” he said.

Kellman objected mildly. “I’ve known Tony a long time and as far as Tony’s concerned, it’s always his last job and he’s never going to work again. He’s probably one of the most working guys in town.”

Shalhoub demurred. “It’s not true I haven’t stopped working. Even short periods of not working feel like an eternity, because you never know when the next thing is going to be. Very few actors know three months, six months, a year in advance when they are going to be working.”

Shalhoub said it has served him well to work in film, television and stage, and noted that more and more people in the industry now move from one to another. “You move through the three and discover that television is a writer’s medium. Film is a director’s medium. But in theater, he said, “the director can do whatever he tries to do, the writer has established what his vision is, but the exact delivery point is between the actor and the audience. It is changing day to day, moment to moment, and that can be a really wonderful thing. It is really where the actor has the most control. And isn’t that why we are all doing this?” 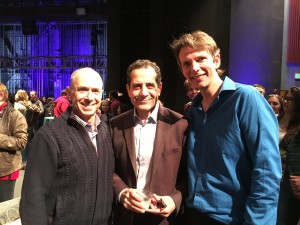 Answering questions from Kellman and students on a variety of subjects, Shalhoub was voluble and insightful.

On why he became a producer. In his first foray into television, “I became aware that in the editing room, they were messing around with my timing. Not just mine, but all the actors, with our comedic timing. Sometimes you could enhance a joke or a timing, but more often, I was frustrated. We did this really well on the day that we shot it. This thing worked like gangbusters, it felt right. Then, when it hit the screen, it was kind of mistimed or it was a double or a triple and not a home run.” So when he got the job on Monk, he asked and was allowed to be a producer. “I was able to have some sway with the writing staff and I was allowed in the editing room, which is really rare in television for an actor. It was a real education.” Shalhoub said it was not only to protect himself as an actor, but “to keep the reins on what we felt the tone of the show should be. The problem in television is sometimes you are working with multiple directors, sometimes different editors are coming through and you need a steady hand there.”

On what directors and writers should know about actors. “Two things to look for: When an actor feels they are really, really lost and need guidance. And look for those times when the opposite is true – when the actor thinks he knows exactly what he’s doing. Both are a problem and usually need help.” When asked how both circumstances could be true, he said, “In some actors with insecurity or overconfidence – which sometimes are the same thing – they want to freeze things and over-orchestrate things and control things in the wrong ways. It’s important that they recognize that it needs to be more free flowing and immediate. And then there is the other extreme. They don’t even want to learn their lines. They want to be completely freeform. And that can be an issue, too.”

On what actors should know about directors and writers. “We are a collaborative pursuit, and it becomes a real problem when any one person loses sight of the collaborative notion. Everyone wants to feel that they are bringing something to the table. Not that everyone gets an equal voice all the time. That’s impossible. … In any kind of collaboration, there is always a give and take. You may not get everything you want all the time the way you want it. It’s a negotiation. If you develop that skill, everyone’s work is enhanced.”

On being in the business for the long haul. “I’ve made this mistake many times, trust me, where you really feel that, ‘OK, I get it. I’m there. I got the secret that was floating out there.’ There’s always room for growth, always room for transformation and change. I hate to put it in these terms, but the fashion for what is great acting changes. As you look at old movies and old television, there’s very, very little that’s kind of timeless and perfect and will always be perfect. … So much of it sort of captured the trend or the thing in pop culture that everyone was looking for at that moment. So I can say that you always want to feel that change is good. Complacency is the enemy of this whole thing.”

On working as much as you can with many different people. Shalhoub recommended that everyone in the room read a book, Art and Fear, published in 1993. “It explores the whole notion that we as creative types drive ourselves mad and lose confidence in our work. It talks about how this has been going on for centuries with painters, with composers, with everybody.” One chapter describes an experiment in a college pottery class. Half the class was told to work all semester on one pot. The other half was to make as many pieces as possible. The professor discovered that the work done by the students who had done a single piece wasn’t as good as the group that churned out multiples. “It’s another way of saying the perfect is the enemy of the good.”

On typecasting. “I have that ethnic thing. Some people thought it was a liability because you have that look. It wasn’t a liability at all. It was an asset. Because I kind of worked it out so I wasn’t pigeonholed. I could do an Italian part or a Jewish part or a Hispanic part or a Greek part. … I think certain actors are great actors but limited to a narrow field of what they are able to do. That’s fine. People have made gigantic careers on that. There are many different kinds of acting. After doing Monk, people asked if I was concerned about typecasting. At my age, any casting is good. I’ll take typecasting, anything!”

On being a director. “The biggest challenge was not trying to do the performance for each of the actors. Directing is a wonderful thing but it brings out the control freak in all of us. The key to directing — if you can afford the time – is to have the patience to let things naturally happen and grow in an actor’s performance. But it’s a difficult thing for me personally to relinquish control.” It is useful for directors to have acted or taken acting classes, he said, and was required when he was at Yale. “Some of the directors were very, very good actors because they were instinctual, raw and kind of riveting because they weren’t concerned about their acting in terms of their egos or their careers. I believe it really helped them as directors.”

On dealing with the rollercoaster of a creative life. “It only becomes a problem if you forget or lose sight of the rollercoaster. It’s always there.” Believing that either the highs or the lows are permanent and unchanging is where you get into trouble, he concluded.