Actor and comedian Zach Galifianakis was being reassuring when he told aspiring stand-up comedy students at the USC School of Dramatic Arts that they would regularly fail. “It’s gonna happen to the funniest person in the room,” he told students April 15 when he visited the school’s first-ever stand-up comedy class. “I still bomb all the time.”

Galifianakis, who has starred in films both comic and serious, has hosted the Emmy Award-winning show Between Two Ferns with Zach Galifianakis for eight years and is currently the star, producer and writer on the dark comedy Baskets on FX, came to the class at the invitation of its instructor, Craig Anton, a fellow stand-up and friend who was in the original cast of the series MADtv.

Despite his great success and years of experience, the 46-year-old Galifianakis admitted that he still gets nervous doing stand-up, and that the discouragement and the bombing are hard to take. Still, he keeps at “this desperate art form” (he was doing a show that evening at Largo) because it gives him confidence. “Stand-up is important in a career. It’s your own thing. It’s just you,” he told the 20 students in the room. “It’s great to have that when you’re not busy with acting. You don’t have to wait for someone to call you – you can find gigs.”

When an early talk show on cable failed, “I went right back to open mics in Culver City,” he said.

Early gigs might be “bringer shows” where you have to supply your own audience members, he told the aspiring stand-ups. They might be held in a Laundromat or the back of a hamburger restaurant. Galifianakis’ first road gig was at a dive in Maysville, KY, where he was instructed to perform in a cage, to protect against beer bottles being thrown by the rough crowd. That didn’t happen, but one of the patrons did bring a life-sized skeleton that he plopped on a chair next to him, adding a lit cigarette to its mouth.

“At the beginning, all the shows are bad,” Galifianakis said, who claimed that after his first successful gig, he endured 700 that were terrible. “You’ve got a smoking skeleton or someone with a blender making a smoothie on your punchline.”

Failure toughens you for unsuccessful acting auditions, where you play to a handful of casting agents or producers. “Bombing before 200 drunks gives you that good perspective. Makes you stronger.”

Galifianakis, who was low key, earnest and full of good advice during his more than an hour conversation, said he didn’t know anyone in the entertainment business when he moved to New York City to take acting classes after graduating from college in North Carolina. 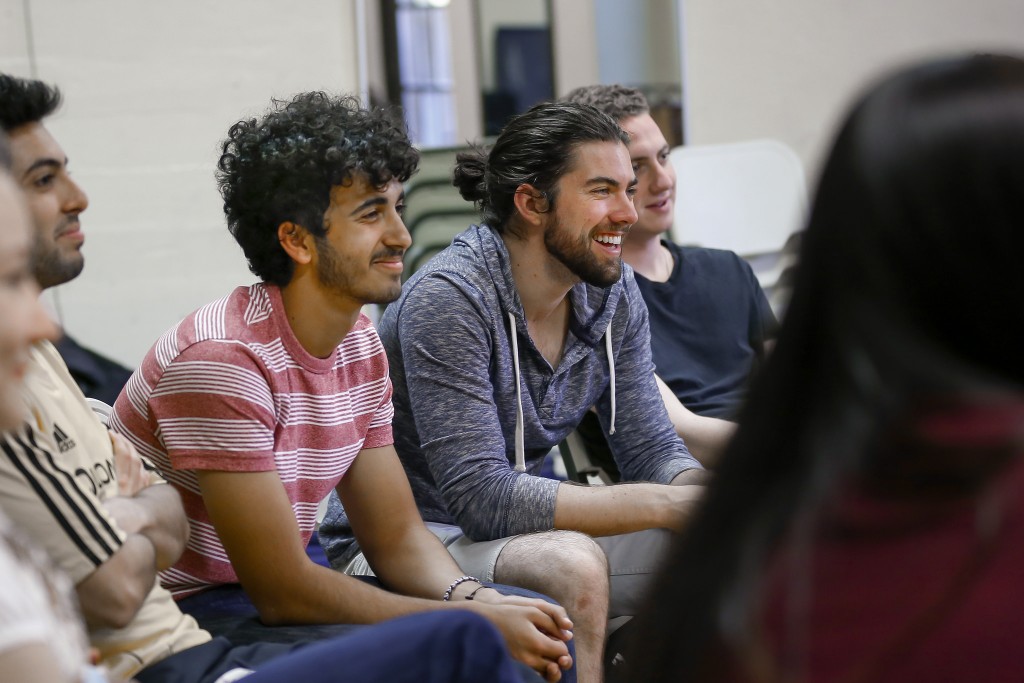 He was willing to “live in closets” and worked very hard, engulfing himself in the stand-up scene. “There was no other life. It becomes your social scene – a very sad social scene,” he joked.

He took a contrarian’s view to the standard advice to market yourself and schmooze with industry people. “Don’t do it. Just go perform. If you’re good, they’ll find you.”

Social media? “I don’t know when people have the time to do it. “It’s so noisy. It’s better to be chill. But I am on FaxBook, the faxing social network,” he quipped. “It takes forever.”

His early act was experimental – he sometimes played a piano – a departure from the formulaic comedy routines of an earlier decade. At the same time he was trying to get a polished set together, he was always trying at least one new bit at each show. You could be fine doing the same 20 minutes or an hour for years, he told the students, but urged them not to rely too much on material that’s already been tested. He gave the example of stand-up comedian Dave Attell, who is so skilled that he will deliberately turn an audience against him, just to show that he can dig himself out of a hole and get the audience back.

Being able to win over strangers is a key skill that distinguishes successful stand-ups from everyday joke-tellers. “My brother is the funniest human being I know, but he can’t do it in front of strangers,” said Galifianakis. “It’s a different dynamic than your friends.”

The comedian also has made a careful study of the geography of the performing space. “I could bore you all day with talking about the geography of comedy. For example, on a pratfall, it will mean more if it’s less obvious. You might want to do it at the back of the stage and not the foreground.”

Some of the other tips and observations he passed along:

Galifianakis acknowledged the usefulness of the USC class, where novices could get feedback in a controlled space and said that simply getting up in public and doing stand-up should be considered a success. “Fame and all that crap and pressure, should never be the end goal.” Stand-up itself is the reward: “You give people joy and get paid for it. People applaud when you show up for work.” And then he imparted a bit of second-hand advice: “My dad told me if you can find that thing that combines labor and love and get lucky, you’ll have a happy adulthood.”

The students will have a chance to put some of the comedian’s advice to work when they present their final routines May 6 at a gig set up for them by instructor Anton at a well-known L.A. comedy club. They will perform at 5 p.m. at The Improv, 8162 Melrose Ave. The public is welcome at the free show.