Dynamic teaching artists Anita Dashiell-Sparks and Kenneth Noel Mitchell have been appointed jointly as co-heads of undergraduate acting for the USC School of Dramatic Arts. The position serves a key role in the School and the training of the undergraduate acting population, particularly in the areas of curriculum design, and faculty and student recruitment.

“I am thrilled to work in collaboration with these remarkable educators. Anita and Kenneth each bring their own exemplary qualifications to the position,” said David Bridel, dean of the USC School of Dramatic Arts. “I look forward to working with them as we engage in positive conversations and actions concerning the direction of the undergraduate acting programs.”

Dashiell-Sparks and Mitchell replace Associate Professor of Theatre Practice Mary Joan Negro, who will remain a vital professor within the School and will focus her teaching in the BA program. “I would like to thank Mary Joan for her years of extraordinary commitment in this position,” said Dean Bridel. “She has consistently demonstrated a remarkable passion for our students and the craft of acting, underwritten by her inimitable integrity and considerable grace.” 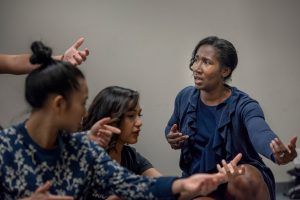 Anita Dashiell-Sparks incorporates conversations of equity, diversity and inclusion in her classes. (Photo by Chris Shinn)

Anita Dashiell-Sparks is an associate professor of theatre practice, serves as associate dean of equity, diversity and inclusion (EDI) for the USC School of Dramatic Arts, and has taught acting, movement and critical studies at USC for over 18 years. As an actor based in New York and Los Angeles, she has performed on Broadway in Night Must Fall, starring Matthew Broderick; and The Sunshine Boys, starring Tony Randall and Jack Klugman. She has also appeared in numerous off-Broadway and regional theatre productions — including The House of Bernada Alba with Chita Rivera and Dominique Serrand’s Massoud: The Lion of Panjshir, both at the Mark Taper Forum in Los Angeles. She has directed numerous productions at USC, as well as directed Letters from Zora at the Tony Award-winning Crossroads Theatre and two critically acclaimed engagements at the Pasadena Playhouse, among others. She most recently directed the world premiere of Tira Palmquist’s Safe Harbor at the Lower Depth Theater Ensemble as part of a new play series dealing with breaking cycles of violence. Dashiell-Sparks serves as the artistic director of EDI at the Stella Adler Center of the Arts; and, at USC, is the founder and director of Building Bridges: Communication, Expression, Empowerment Theatre Arts Program, which teaches self-presentation and self-expression to at-risk youth. Dashiell-Sparks has received numerous grants for her theatre work and has taught and developed arts and arts therapy curriculum for the Dream Yard Drama Projects in N.Y. and L.A., The Public Theater/New York Shakespeare Festival, Vineyard Theatre, TADA! Theatre and Dance and for the National Foundation for the Emotionally Handicapped/Penny Lane in L.A. In academia, Dashiell-Sparks has taught acting and movement at Barnard College in N.Y., guest lectured in undergraduate drama at New York University, and performed and presented at conferences at St. Mary College of the Woods and DePauw University. Dashiell-Sparks trained with master acting teacher Ron Van Lieu, among others, and received her MFA from the acclaimed New York University Tisch School of the Arts Graduate Acting Program. In addition to acting, teaching and directing, she is a trained and certified EDI practitioner by SEED and NADOHE. She is a proud member of AEA, SAG-AFTRA and SDC (Society of Stage Directors and Choreographers). 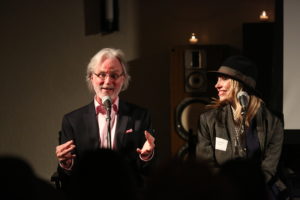 Kenneth Noel Mitchell is a professor of theatre practice in musical theatre and head of musical theatre at the USC School of Dramatic Arts. Prior to that, he was the founding head of acting for the New Studio on Broadway and the associate chair at New York University. He served as the coordinator of acting at the University of Minnesota/Guthrie Theater BFA Professional Theatre Training Program. An artist with disabilities, Mitchell is passionate about creating inclusive and equitable opportunities for all students. As a director, his work has been represented in New York at the Home for the Contemporary Theater and Art, the Joseph Papp Public Theatre, Soho Rep, The American Globe Theatre, Musical Theatre Works and The Sanford Meisner Theatre. Regionally, he has directed productions for The American Stage, Stage Works, Bristol Valley Theatre, White River Junction Theatre Festival, The Asolo Conservatory Theatre, The Eckerd Theatre Company, The Fredonia Opera House, the Guthrie Experience and the Provincetown Theater. As an actor, he has appeared at The New York Shakespeare Festival, The Atlantic Theatre, The Performing Garage, The American Globe Theatre, The Dramatist Guild, Bristol Valley Theatre, American Stage, the Greenbrier Valley Theater and Stageworks. Mitchell has served as the artistic director for American Stage and Theater Outrageous, and he has been affiliated with the New Shakespeare Festival, Circle Rep and the Manhattan Theatre Club. He is a member of Actors Equity, the Actor Center and on the board of the National Alliance of Acting Teachers.