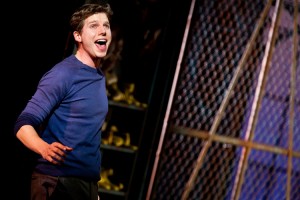 This marks the second Tony nomination for Sands who was previously nominated as Best Featured Actor in a Play for his work in Journey’s End in 2007. Showing his versatility, this time Sands is nominated in a musical for his leading role as Charlie Price in Kinky Boots, which leads the nominations with a total of 13, including Best Musical. Brown receives the first nomination of his career for his role as Smokey Robinson.

“The stars have really aligned for me, and I’m not sure why, but I’m very grateful,” said Sands, who credits his training at the School and a measure of good luck for the work he has booked since graduation.

Sands plays shoe factory owner who must find a way to keep his late father’s business afloat. In search of a solution, Price runs into a drag queen named Lola, who gives him the idea of producing high heel boots that can support a man’s weight.

The Chicago Tribune declared that Sands “offers up a genuinely affecting and potent leading performance with a strong emotional center” and The New York Times hailed his performance as “terrific.” 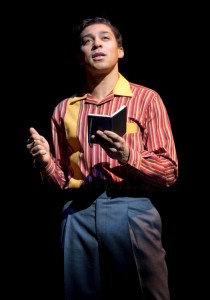 Charl Brown in Motown: The Musical

For his role in Motown, Brown performs as the famous singer Robinson in the musical recount of the life of iconic Motown founder Berry Gordy and his creation of the legendary record label.

The 67th Annual Tony Awards will be broadcast live on CBS from Radio City Music Hall on Sunday, June 9. For the full list of nominations, visit the official Tony Awards website at www.tonyawards.com.