Velina Hasu Houston, a Tokyo-born playwright, librettist, and essayist who is a professor, director of dramatic writing, associate dean and resident playwright of the USC School of Dramatic Arts, and whose work often has focused on U.S.-Japan relations, recently interviewed Amanda Waddell, a USC alumna with a similar interest in the U.S. and Japan.

When one thinks of a typical citizen of Japan, one may not think of someone like USC School of Dramatic Arts alumna Amanda Waddell. Originally from Houston, Waddell, a 2010 graduate, has been a resident of Tokyo for five years.

What is she doing there? Theatre.

After graduating from USC, Waddell moved to Tokyo and undertook a two-year directing program at the Creative Theatre Academy at Za-Koenji Public Theatre. She studied under two directing professors, Makoto Satoh and Ikuta Yorozu as well as with visiting, practicing artists in the Tokyo theatre world. While her studies replicated some of the studies that she had experienced at USC, the difference was that everything was taught in Japanese. She studied classical Japanese theatre, kyogen (comedic Noh performance), aikido (martial art) and other dimensions of Japanese theatre.

“I had hoped to learn more about contemporary Japanese theatre, particularly the underground theatre movements that popped up during the 1960s and 1970s. But since the professors were actually some of the movers and shakers from that era, they were a little too embarrassed to talk about their own exploits,” Waddell noted.

“We did talk more about… how to really market and engage small communities through theatre,” she said. “Being able to learn the inner workings of a public theatre was just an added bonus. 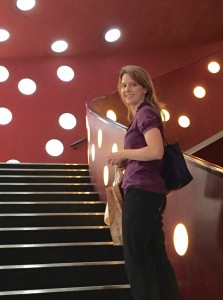 Waddell’s Japanese headway is with the performing company Miss Revolutionary Idol Berserker, which she has been a member of for two years. She is a theatre company member, and also works in production, helping the company’s producer to set up shows in Europe. The ability to be a performer and to help with production has enriched her life as an artist. She has traveled with the company to Germany and Austria. Next year, it will be presenting a production in London with a cast that includes 33 people.

“When I was seeing theatre in Japan, I saw the work of my company’s founder, Toco Nikaido, and it blew me away,” Waddell said. “Everything else that I had seen didn’t seem very different from what I had seen in the West. But she was different. Like the punk aesthetic of Great Britain, Toco Nikaido was trying to be different from theatre’s forefathers, rebelling against established plays.” Waddell said she was moved by the youthful energy that she saw in the company’s new theatrical forms.

“Toco Nikaido speaks to our younger generation today,” Waddell said. “Theatre of the 1990s was quiet and more realistic while the generation of theatre after that had many different styles. Toco Nikaido’s mission is to make the most interesting show in the world speak to the world that our generation lives in, to take all the pieces of disposable culture and put it on stage and allow the audience to take form it what they want.”

While the theatre world receives the company’s work with skepticism, the art world has warmly embraced the work of Nikaido, a product of Japanese youth subculture who graduated from J.F. Oberlin University’s College of Performing and Visual Arts in Machida City, Tokyo, and founded Miss Revolutionary Idol Berserker.

“I love the older theatre here, but they should be open to letting us enter the conversation,” Waddell noted. 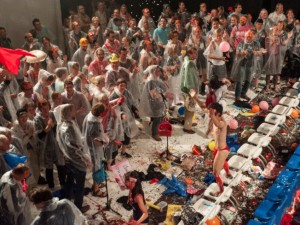 U.S. theatre issues exist in Japan as well. Waddell finds that there are “very few female directors,” but notes that this reality may be a global problem. Also, often younger generations want to be different, but the question “Different from what?” is one that Waddell understands intrinsically and it influences her artistic journey.

That foundation allows the work of Miss Revolutionary Idol Berserker to be novel. Its substance and presentation are different from theatre in the U.S.

“Not only are cellphones allowed in the show, but you can also upload videos of the performances to YouTube and social networks,” Waddell noted. During the course of the show, the company tosses buckets of water, tofu, and seaweed at the audience. Sometimes the audience members wear provided rain ponchos. Waddell said that they frequently bring waterproof cellphones and cameras to the show.

“I would say that it [the productions of Miss Revolutionary Idol Berserker] is the greatest interpretation of what I personally feel like growing up in the world today,” Waddell said. “Our performances, like life, are overflowing with information, advertisements, propaganda, and cheap, plastic disposable consumer goods. The show has this air of irrelevant nihilism and existential emptiness, while at the same time being a completely heartfelt and gut-wrenching spectacle. It is everything and nothing all in one. It is post-dramatic theatre at its very best.”

Through her work, Waddell hopes to connect Japanese theatre practitioners to the rest of the world, whether that is through performance or curating different Japanese theatre troupes’ tours abroad. She also would like to produce young U.S. artists in Japan, and create more opportunities for young Japanese artists to study and attend theatre workshops in the U.S. and vice versa.

“Just recently I produced the Tokyo premiere of a friend’s solo-performance piece,” Waddell said. “It was performed in a bathtub, and I loved the chance to be able to share this style of performance with my Japanese friends, who were enjoyably shocked.”

Waddell feels that her education in dramatic arts and Japanese at USC gave her the tools that she needed to do what she does now. USC gave her “the encouragement to explore.” Moreover, she believes “the faculty and staff [at the USC School of Dramatic Arts] are very internationally mindful/connected people, which sort of opened the door for me to feel courageous enough to attempt to create a theatre career abroad.” 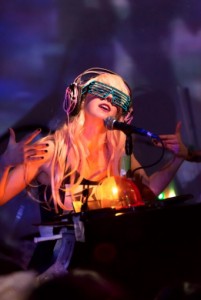 Life in another country

The native Texan’s interest in Japan started with an anime character, and was amplified by a summer abroad when she was 16 years old and a USC study-abroad program in her junior year of college.

“I used to watch Sailor Moon on TV with my sister and it hooked me,” Waddell said. “When I didn’t get into a summer acting program in my junior year of high school, my parents suggested a summer program abroad…” That sent Waddell into a “training mode.” She bought books about Japan and read fervently. The program placed her “in the middle of nowhere” (Ishikawa Prefecture in Komatsu). She studied Japanese and had a “normal high school life” with her host family.

At USC, Waddell majored in dramatic arts and East Asian studies. For her study-abroad program, she attended Tokyo International University in Saitama.

“My parents are resigned to the fact that I am not coming back,” Waddell said. She hopes to stay in Japan “long-term.” “I know that is somewhat vague, but I don’t see me heading back to the States anytime soon. I feel that I’ve made such headway over here that it would be kind of silly to start again somewhere new.”

On a day-to-day basis, Waddell finds her life in Japan to be engaging because of the excitement of the megalopolis that is Tokyo, but she also feels that she is walking a cultural tightrope. “The better your Japanese is, the more you are expected to follow Japanese social norms,” she said. “However, at the same time there’s a kind of pressure to be able to turn on a dime and fulfill American stereotypes as well.”

But she loves the food, great “hole-in-the-wall” theatres, bars, and art exhibits. She also loves the safety of the society. She can walk around at any hour, day or night. And she doesn’t need to have a car. Japan has perfected mass transit. “I’ve been such a fan of Japanese culture for so long,” Waddell said. “But living abroad has really allowed me to explore what it means to be an American, which is something I never thought about when I lived in the U.S. It’s not an easy trick having to discover your own identity and ‘American’ identity while straddling these two very different cultures.

Of course, Waddell is an advocate of U.S. citizens living abroad.

“I highly recommend practicing theatre outside of the U.S. and especially in Asia,” she said. “We should be… creating a huge network of bridges between the East and West.” She also stressed that such exchange must be approached openly and with cultural respect.

“It is… important to be humble when exposing oneself to another culture,” she said. “America is not the be-all and end-all. But if you come with an open mind, you will get back more than you could ever have wished for or expected.”